Impact of Oil Prices on Economy by Graphs. What states and nations win? What industries lose?

Note from  BootheGlobalPerspectives (BGP) : We thought our readers would appreciate this article, we give credit to Bloomberg and writers Steve Matthews, Lauren Etter, and Jeanna Smialek for portions of this article. We are watching and should the price of oil continue to fall for an extended time, a downward impact on the economy will occur, especially in oil producing states. We already have seen hotel "listings" for sale increase and smart movers and shakers are preparing for the worst, curtailing projects, and freezing hiring. Time will tell, but in this kind of environment, those who have the most in cash reserves survive, while others struggle and fail. Issues such as this impact property values. Note the graphics. 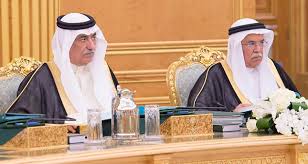 Why is this happening? See the chart: the USA production of oil is now greater than Saudi Arabia, and the Saudi's have said that they want to regain "market share." This means making it unprofitable for U.S. and other drillers to drill and operate. Thus, Saudi Arabia is pumping and producing at full levels, while world demand seems to be slacking off.

This chart tells us the answer to the question: why? U.S. oil production and market share exceeds Saudi Arabia. Saudi Arabia sees the U.S. less dependent upon Saudi Arabia, and does not like the possibility that the USA is trying to repair relations with Iran. Saudi is Sunni, while Iran is Shia. Iran could become the most influential power in the region, and a low price of oil punishes Iran. Additionally, these oil prices punish Russia, which has also competed with Saudi for market share. Saudi's cost of production is lower, and its foreign currency reserves of over $700,000,000 (seven billion) give it the power and strength to dominate and flood the market with oil. However, in spite of lower prices, most producers are still producing. Thus, Saudi's strategy only succeeds if this is a sustained effort.

Historically, past drops in the oil prices follow the pattern seen in the chart, with a rapid fall and then only a slow recovery in prices. Only a change in supply (unlikely), demand, or some crisis situation would accelerate the process of recovery. Note the price fall in 1985-86 charted with the 2014-2015 fall in prices.

The research is what industry said was "break even" prices in 2014. 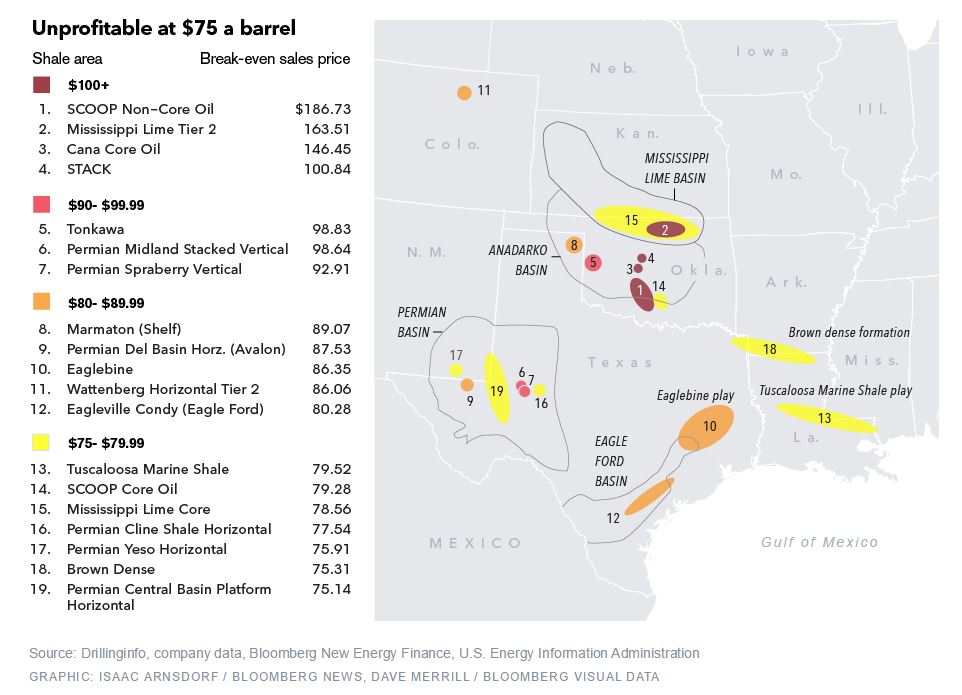 The research to the left originated from industry sources, although we have noticed in recent weeks industry leaders are revising their public "break even" prices downward.

The Fiscal Fuel chart shows at what price levels the states adopted their budgets. Some states will lose budget income with lower oil prices.

That may be about to change. For every 25 percent drop in oil prices, employment could decline 0.6 percent in Texas and 0.8 percent in Louisiana. Wyoming stands to lose 2.1 percent of its jobs and North Dakota and Oklahoma about 1 percent each, according to research by Stephen Brown, a professor of economics at the University of Nevada-Las Vegas, and Mine Yücel at the Federal Reserve Bank of Dallas.

In Houston, the fourth-largest U.S. city, employment growth probably will slow to 2.8 percent in 2015 and 0.7 percent in 2016, said Robert Dye, chief economist at Comerica Inc. in Dallas.

“This is a downdraft that will be felt throughout the entire Houston economy,” Dye said of the oil-price drop. “We are expecting significant economic drag.”

A protracted pullback could push Texas into a recession, according to JPMorgan Chase Chief U.S. Economist Michael Feroli. In a report issued Dec. 18, he compared the current situation to a similar slump in the 1980's when a Texas oil boom turned into a bust, roiling the housing market, spurring widespread area bank failures and spawning a “painful regional recession.” This could impact hotels, city budgets, and unemployment, in "oil production areas."

Such an outcome would mean smaller state and municipal coffers. Oil and mineral revenue accounts for 87 percent of the budget in Alaska, 31 percent in Wyoming, 17 percent in New Mexico, 13 percent in Louisiana and 4.8 percent in Texas, based on the Standard & Poor’s report.

Moody’s Investors Services revised its outlook for Alaska this week to negative from stable. “Just as the state has benefited from high oil prices in recent years, prices well below previous expectations could lead the state to substantially reduce its financial reserves,” Moody’s said.

Some communities may find it difficult to pay bond holders. Voters in Cuero, Texas, approved a $76 million offering last year to build two new elementary schools and a performing-arts center.

“If the drilling is curtailed for any length of time or pulled back because of lower prices and the tax base begins to fall, that debt will still be out there,” said DeWitt County Judge Daryl Fowler.

For the national economy, reduced prospects for energy-producing states will be masked by stronger consumer spending, with Americans paying less to fill their cars’ tanks and heat their homes. The nationwide average for a gallon of gasoline fell to $2.48 on Dec. 18, the lowest since October 2009.

“Consumers gain more than domestic producers lose,” said James Hamilton, an economist at the University of California-San Diego and former visiting scholar at the Fed, whose research focuses on energy.

Middle-Class Tax Cut and Winners in the U.S. Economy.

Each 1 cent decline, sustained for a year, reduces consumer spending on gasoline by $1.1 billion, according to Stuart Hoffman, chief economist at PNC Financial Services Group in Pittsburgh. The drop can be considered a “middle-class tax cut” because these households spend the most on gas, Goldman Sachs Group Inc.’s Kris Dawsey wrote in a Dec. 9 note to clients.

That’s good news for shoppers in Mississippi and South Carolina, where gasoline expenditures take up the largest share of disposable income, based on a Moody’s Analytics analysis.

No doubt, there are economic benefits to lower energy costs that will stimulate some areas and industries, as well as help consumer spending.  This is like giving every American an additional $2,000 per year in auto fuel savings, and another benefit from lower food costs, lower utility bills, and generally lower prices for many consumer goods.

Travelling consumers and businessmen will enjoy lower hotel rates because hotels will be lowering prices, due to less demand from the oil sectors.

Additionally, consumers in large cities, such as Atlanta, Chicago, Miami, and New York, will benefit from lower oil prices, for both heating, utilities, and travel. Airlines will profit, and travel should decrease air and rail costs. Trucking and distribution will benefit. Non-coal utility companies should lower their rates. Farmers, agriculture, and food production will all see lower costs and thus lower prices. Now, if farmers have lower prices in fuel, fertilizer, processing, storage, and delivery expense, the price of food should go down, and this is a plus for consumers.  However, the studies indicate that significant recession could occur in oil producing states, if low prices prevail for a long period of time.

LOSERS: Losers in this matter are oil companies, drillers, and areas that see break-even prices above current market prices for oil and gas. One huge loser is renewable energy. Companies that make, sell or distribute solar panels, wind turbines, and alternative sustainable energies will find that low energy costs delay and kill many progressive projects that the world and the USA need in the long run. The environment will be a loser because more petroleum products will continue to be used—at lower prices—creating a higher carbon impact. "Real estate investors in oil production and drilling areas will likely see real estate prices decline" says Appraiser/Broker, Ben Boothe.

The hospitality sector is overbuilt with new hotels in the oil states, and these hotels will be lowering rates to try to maintain cash flow, with decreasing occupancy. Conversely, the travel and hospitality industry in non-oil areas may benefit from lower gasoline and more travel. Other international losers include Russia, Iran, and a host of smaller nations that produce oil.

International winners would be China, India, and Korea (North and South). China can sit back on this one and enjoy seeing many Western nations decline, while the low price of oil helps their manufacturing base. Economists are still trying to calculate impacts upon the USA. 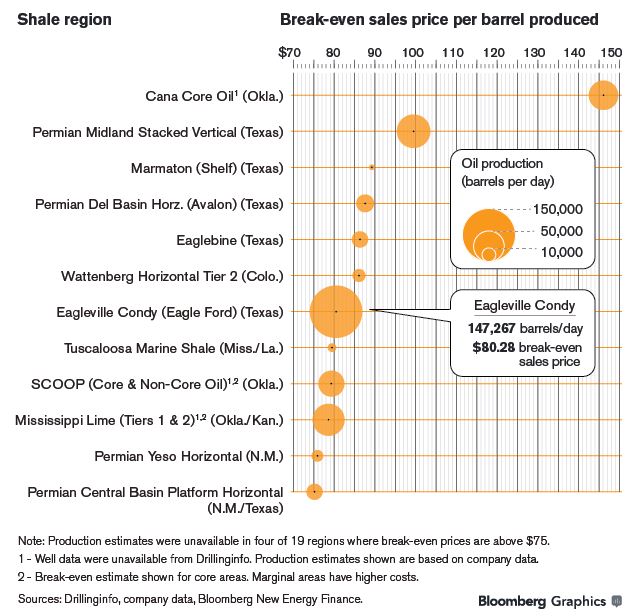 STATES THAT ARE LOSERS WITH LOW OIL PRICES: Oil producing states, such as Oklahoma, Texas, Arkansas, Kansas, California, North Dakota, Pennsylvania, Louisiana, and southwestern New Mexico will show some economic downturn. Of these, states such as Texas and California have diversified, and Northern New Mexico has little oil production, so that some losses are offset by other economic gains, but our opinion at Boothe Global Perspectives is that there will still be a net downturn, or growth slowdown for these states.

Bank lending will be tighter. Many homes, hotels, and mobile home parks will go up for sale, and there will be sales at lower prices, particularly in oil patch areas.

In West Texas, South Texas, Southeast New Mexico, and North Dakota, hundreds of new hotels, housing, and apartment developments have been built and no doubt these will suffer. Some projects will be cancelled. Others will simply cut expenses, and room rates for hotels will decline substantially.