Paris, Multiculturalism, and Terrorism. Which will survive in France? Updated 1/13/2015

Report on Paris, Multiculturalism and Terrorism...which will survive? 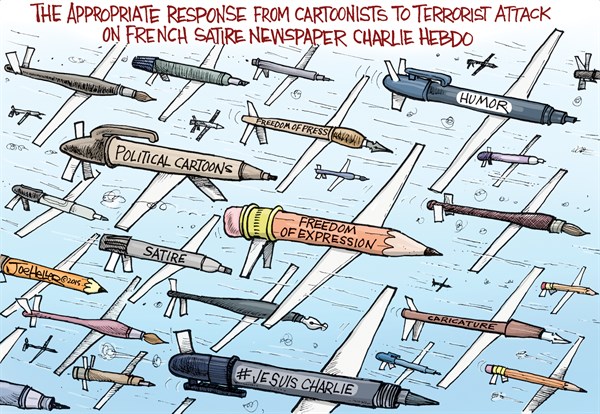 We at BootheGlobalPerspectives again write about freedom of speech, and freedom of expression.  If we are to have a

world of peace, we must be tolerant, respectful and 'live and let live'.  There are powerful forces in our world, which

seem to be promoting conflict and power politics. This article about the terrorist murders in France, and attacks

upon journalists speak to deeper issues, of why multiculturalism is in danger, by well funded advocates of

"conversion to Islam or die".  We hope you find this of interest and stimulating. Today in France, hundreds of thousands

of French people are calling for unity for France and French culture. Violent terrorism is now considered a danger to the

will not be tolerated by French leaders.

PARIS HAS FOCUSED WORLD THOUGHT ON A DISCUSSION OF OPEN SOCIETY AND THE DANGERS OF MULTICULTURALISM, WHEN BENEFICIARIES OF  MULTICULTURAL HOSPITALITY, HAVE AN IDEOLOGICAL COMMITMENT TO DESTROY THE CULTURE THAT HOSTS THEM

FRANCE SAYS: "NO...WE ARE NOW AT WAR WITH THOSE RADICAL TERRORISTS WHO WOULD TRY TO DESTROY OUR PEOPLE, OUR SOCIETY, OUR CULTURE"

The gang murder of journalists in Paris, by Islamic men, has brought a global avalanche of response, and it would appear that the killing of these journalists created a "wildfire" of new journalistic activity, which like a "drone attack" is explicit and critical. These murders discredit the credibility of Islam for millions and reveal a dark side of that culture that is an embarrassment to main line Muslims.

Terrorism, murder, violent killing in any form among Muslims, is harmful to the group, the religion and to peaceful society. It is the antithesis to peaceful co-existence and multicultural idealism. It destroys peace and only brings pain to humanity. But other than the killed victims, the ones hurt most by thuggish murders by Muslims, are Muslims.  It is no wonder that Islamic people, even when their own commit such horrid crimes, call themselves the victims.  Victim mentality is based upon anger, sadness and fear. No doubt, those French youth who practiced uncouth, disrespectful or impolite journalism, could have improved themselves by learning social graces and mature ways to communicate, but that does not justify murder.  It does not justify trying to shut down freedom of speech. Any religion or ideology that is not strong enough to tolerate cartoons drawn by immature youth, demonstrates weakness. Remember the wise of this world learn to be mature enough to control violence anger, fear and control base emotions that lead to killing in the name of their God. To this end, Paris, Sunday, January 11, 2015 conducted what was intended to be a million people unity demonstration, (but over 2,000,000 showed up) to support the values, law and freedoms of France. The nation's leaders spoke for France and the French people in declaring war upon radical Islamic Terrorism.  This is said to be the largest public demonstration in Paris in history.

As the French demonstrate for French values, French culture, and French freedoms of the press and expression, similar demonstrations took place worldwide. 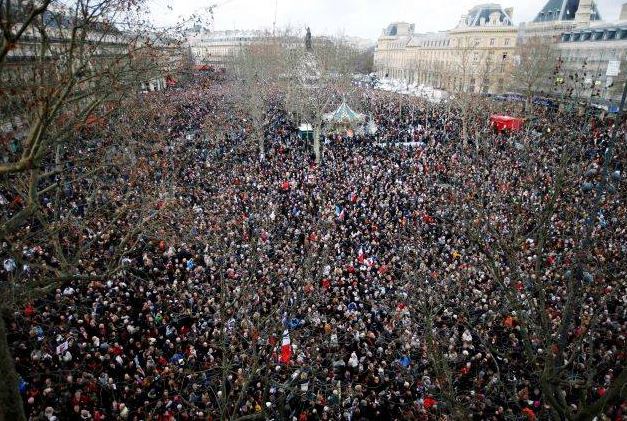 In other words, rhetorically they called themselves "weaker" and thus justified terrible actions to hurt others as a result. It, a twisting of logic is of course rhetorical manipulation, but we have watched for decades  decades since, and observed similar logical perversions popping up, wherever there are fundamentalists who want control and gain power in liberal institutions. Saudi Arabia and its historic alliance with Wahhabism has been a huge financial contributor to radical terrorism. They take advantage of the tolerant attitudes of progressive groups (political, civic and religious) and fund projects to try to systematically destroy the very same tolerant people that make the dogmatic fanatics able to function. Fundamental Islam has been using this "righteous victim" or Tyranny of the weaker (offended) brother approach to justify dominating or destroying others for centuries. The merging alliance of Wahhabism and the House of Saud, created an aggressive and well-funded new radical "fundamentalist" voice for terrorism particularly after the death of Muhammad bin Saud in 1765 that, according to DeLong-Bas, Muhammad bin Saud's son and successor, Abdul-Aziz bin Muhammad, initiated a "convert or die" approach to expand his domain, and when Wahhabi s adopted the takfir ideas of Ibn Taymiyya.).  In 1901, Abdul-Aziz Ibn Saud, a fifth generation descendant of Muhammad ibn Saud, began a military campaign that led to the conquest of much of the Arabian peninsula and the founding of present day Saudi Arabia, after the collapse of the Ottoman Empire. The result that safeguarded the vision of Islam based around the tenets of Islam as preached by Muhammadibn Abd al-Wahhab was not bloodless, as 40,000 public executions and 350,000 amputations or decapitations were carried out during its course. Saudi Arabia, rich with new oil wealth has continued to finance and support Wahhabism, leading to violent terrorist replications worldwide.

Its largess funded an estimated "90% of the expenses of the entire faith", throughout the Muslim World, according to journalist Dawood al-Shirian. Much of that money has been spent in places such as France, on schools, mosques, and groups to promote this most conservative, fundamentalist and radical branch of Islam. Saudi Arabia funded IS, or ISIS in it's beginnings, and only recently, out of fear of being attacked by ISIS has expressed reservations.

Today, France is re-thinking its multiculturalism with reservations, after decades of doing business with Saudi Arabia.  Unfortunately, inviting and allowing intolerant fundamentalists to France has divided France, created civil disorder, brought violence and murders creating what many consider a national disaster.

Multiculturalism, or tolerance of an established liberal society, has become an exploited gift to those people who would destroy that society. This debate is ongoing in France and throughout progressive freedom loving nations. It is a discussion that is colored by the murderous abuse of violent fundamentalists from a different culture, who would impose their darkest will upon their host countries and who do not have the maturity or restraint to restrain from murder.

But France and freedom loving nations, believe they are strong enough to tolerate rude or disrespectful journalism, because freedom of speech offers an acid test upon tyranny and defiled people, whether they claim to be religious, or of whatever political party they follow. 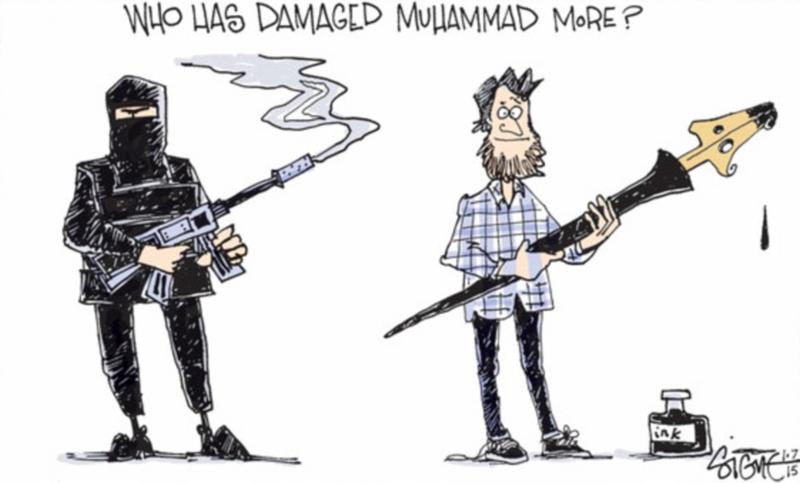 Events such as the military thuggish attack, murdering French journalists clarify the reality of what hate mongers and murderers are.  Murderers, using as an excuse cultural or religious motivation are still murderers.  There is a truth to life, which suggest religious fanatics are the most dangerous of all fanatics, because they lose touch with spirituality and ethical values. Thus they can justify any atrocity. This kind of behavior is not accepted by any true religion, whether it be Islam, Christianity, Hebrew, Hindu or Buddhism.

It is not accepted in civilized ordered society, nor is it condoned by any of the world's great holy books. While Wahhabism has been seen as a group of violence and political ambition, even it has an intellectual core group that disdains terrorist murder and violence.

Even some leaders of the Wahhabi think that progress is in order, and a glance at history suggests that when the Arab world was a leader in technology and science it was a powerful world leader. The Arab world went into darkness when fundamentalism took over and "darkened" the brilliant light of science of it's intellectuals.

Unfortunately the moderates or progressives of Islam do not, or cannot control the extreme fundamentalists who still justify killing and murder. Rarely is it pointed out that these terrorist events are thinly veiled attempts to assert or expand political and cultural control.  Islamic fundamentalists have been using this methodology for centuries, at the bequest of obscure and ego-centrist Mullah's with grand designs of a world view thrust upon naive and easily manipulated young men (and women).  Fundamentalists tend to shoot themselves in the foot when they kill others, in free societies, because they destroy the credibility of their own argument.  Of all people, they should know that murder, guns and violence cannot kill ideas.  Actions like this only ignite anger and determination to fight for free speech and cultural freedom. 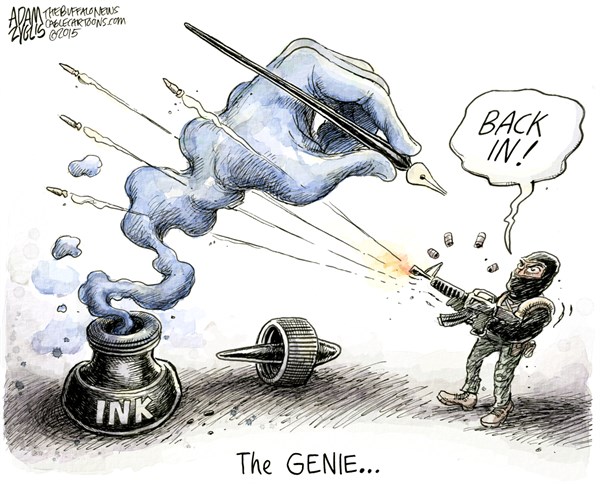 Ideas such as freedom of speech are indestructible in western societies. Killing the messengers of free speech spawns ten new messengers for freedom for every one killed. Murdering people as they did in Paris inflames the message of freedom and discredits the killers. It also tends to send these murderers on a quick journey to their Jahannam.

The killers in Paris, by their actions have already done more to stimulate free speech than any event in decades. They have let the genie of free speech to "come out of the bottle" bigger than ever and have energized western culture's love for freedom of speech yet again. Perhaps this singular terrorist event will renew the passion in France, to cherish and strengthen it's own culture. It could well impact the attitudes of western civilization throughout the world.