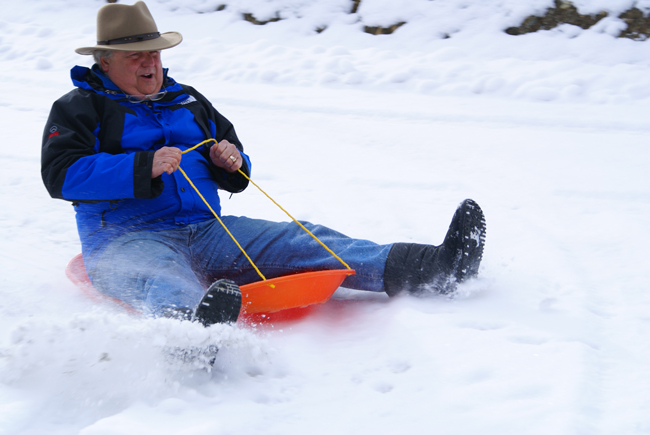 Editor's note from BootheGlobalPerspectives (BGP)  We saw this article in MSN's 'living' section, and credit them for the article.  Sometimes we feel like sliding down a mountain of debt.  Holiday debt is a concern for millions, and we thought it perfect for some of our readers, their families and kids. Of course, millions, rich and poor are facing those credit card and holiday bills coming in for the things we bought a month ago. It is an amazing thing in our society, we as a culture agree to put ourselves into debt, often being charged up to 29% interest by some unscrupulous credit card companies (did we mention Citi-Bank group?) and find ourselves hooked into loans that we would never agree to if we had known the facts.  I spoke to one business executive, who told me he ran up $72,000 in credit card and charge account debts just for December.  Another housewife told my wife that her AMEX cards zoomed up to $13,000.  Whether your holiday bill is $2,000 or $72,000 here are some nice comments.  Let us say, a great way to handle this is simply the Boothe formula.

Cut up your credit cards, except for one that you only use for gas or emergencies.  Find ways to increase income, work longer hours, ask for a raise, get a second job, or start your own new company out of your home.  Or for some of our kids who never grew up, put your guitar aside and actually go out and get a job. Yes, work. It may be a new concept of millions of people, but we find it satisfying and rewarding.  Now when I was a child, I hated it when my dad woke me up at six to go out and work in the garden, have breakfast and then "hug" him off to work.  When I hit 30 and had a family, I found that I was always up at 6 or before, trying to torment my kids into "getting up and at it" just as my father did. But, now at the age of 66,  I am always up at 5 or 6, and working away.  This habit, the early morning routine of quiet time, meditation, planning, and getting a head start has proven to be some of my most rewarding work. I recommend it to you, especially if you have extra holiday bills coming your way.  My youngest son, Ethan, went to work for EDS yeas ago and asked me how to get ahead. I told him, "Get to the office well before 8 AM, and when all of your department arrives, have a note on their desk: "I finished my work early, let me know if there is anything I can help you with"...and write the time on the note  7:20 AM or whatever.  He tried it, and within 60 days was recognized as employee of the month...standing out in a crowd of several thousand. He got it.  That early extra effort can help bring in rewards for your life.   BGP)

6 Steps to Paying Down Holiday Debt

The months following the holiday season can bring a continuing avalanche of unwanted gifts, weight, and debt. Unlike the first two, debt and the associated effects of overspending (on travel, gifts, a new wardrobe, holiday décor, etc.) are difficult to eliminate. But there's no need to fall victim to continued overspending and debt accumulation. The key to getting back on track: Set a deadline for yourself -- two months seems reasonable -- and carefully monitor your outlays. Follow these six tips and pay down holiday-induced debt in no time.

Put a Limit on Your Debit Cards.

Before hitting the stores again, ask your bank to place a daily spending limit on your debit cards. If you attempt a purchase that exceeds your daily spending limit, the retailer will reject the transaction; to bypass the decline, you must call the bank for an approval. A daily spending limit helps replenish your bank account by choking off access to it. Trying to exceed the limit requires wading through a bureaucratic process -- just the type of hassle that can put you off your free-spending ways while helping you save to pay off your debt.

Paying with cash instead of plastic works much like setting a daily spending limit on your debit card. Once the green stuff is gone, you're down for the count. (Unless there's a nearby ATM, of course, but let this be another moment for taking stock of your two-month debt reduction intentions.) With cash, unlike plastic, you can watch your stash dwindle with each purchase. As U.S. News & World Report points out, research has shown that shoppers spend less when paying with greenbacks.

With the holiday spending craze now in the past, you may notice that you're struggling to pay bills. Take any gift cards you received and put them towards critical expenses, such as a cell phone bill. If you're holding a retail-specific gift card -- Target, say -- use it on necessities, such as groceries or medications. This feint lets you to direct the funds you would have used on these items to paying down debt incurred during the previous months.

This tip sounds obvious, but advertised discounts can easily seduce you into thinking you need to buy more. To get your financials back on track within two short months, resist any and every temptation, including post-holiday sales blaring huge markdowns. Immediately unsubscribe from all marketing and promotional email lists and avoid scanning store flyers. Lack of knowledge about so-called deals is an excellent way to avoid taking the bait.

Perhaps holiday debt still lingers despite having resorted to cash-only, imposing a daily spending limit, and consigning your gift cards to bills. This may seem insensitive, but consider selling some of the gifts you received. Debt only gets harder to pay off as the balance rolls over each month, and you need cash to climb out of the hole. Selling those $200 headphones or the $100 purse would help you pay down holiday-induced liabilities. If receipts accompanied the gifts, try returning the items to the store for a credit or, rarely, cash. Use the store credit for something practical and put the money you otherwise would have spent on these necessities towards debt reduction.

Taking a part-time, seasonal job for just a couple of months is one quick way to help relieve the debt overload that accrues with holiday spending. Although the commercial crush slows in January and February, many companies are still hiring seasonal employees. Target and Staples, for example, often need workers to process returns and to help with inventory counts and restocking shelves. Retail and seasonal pay typically hovers in minimum wage territory, but $150 or so every other week will help put your finances in order.