It was another one of those "coincidences" of life. 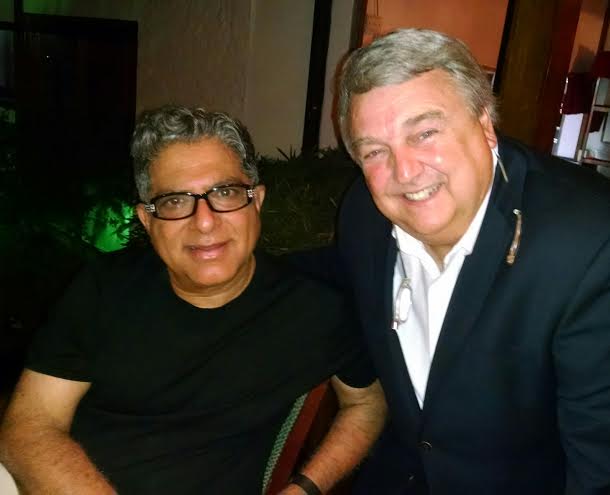 We were in Costa Rica on business, and as we walked through a restaurant in the beautiful Wyndham Hotel in San Jose Costa Rica, there sitting alone was Deepak Chopra. My wife, Saneh, an actress, has long followed his ideas through books and teachings.  Chopra has over 80 books to his credit, 22 NY Times best sellers, and is considered one of the world's important opinion makers. He has been called: "One of the world's top ten most influential spiritual leaders around the world".  TIME  magazine called Dr. Chopra "one of the top 100 heroes and icons of the century".

Saneh, who just finished a couple of appearances in movies needed an "energizer" and instantly perked up as she  recognized Chopra, giving him a hug with a "I have appreciated your writings for years!"

He then provided free tickets to a city wide symposium on his new study and book by the same name: "THE FUTURE OF GOD".  We went and he held the audience of 3,000 people spellbound for nearly two hours. Afterward, he joined us for dinner and we had a marvelous time of relaxed conversation. What a privilege meet quality people like this and to be able to "pick their brains".

Chopra, a Medical Doctor, has spent 30 years researching the power of the mind, understanding of consciousness, and incorporates the ideas of some of the worlds best physicists, into a rational system of thinking, to bring more clarity and understanding of the human condition. He has been interested in dimensional aspects of quantum physics, interconnectivity, and the concept of consciousness and spiritual understanding of God, and our perspective of time and space.  His meditation guidance is exceptional.

He has long brought a concept that there is a huge presence of spiritual power within each person. In contrast to some religious systems which emphasize that all humanity is flawed and essentially evil requiring some cleansing or redemption  or often, institutional ritual to gain hope, Dr. Chopra teaches that there is a huge reservour of good and spirituality in each person, if we can only open ourselves to it. He believes that with a spiritual, intellectual and meditational effort that people can open up the "good within you" and tap enormouse power and energy.   He believes the path to spirituality is internal, not dominated by an outside institution or person.  His research in science, medicine and physics has opened up awareness of a new, non judgemental,  non institutional path for personal spiritual and intelletual development.  As a Medical Doctor, he has uncovered evidence suggesting that the spirtual and meditative excercise helps to heal and bring physical repair to our bodies as we also refresh our spirit. Dr. Chopra does not oppose or criticise established religion, he simply offers some insights into greater discovery for each person's path.

We found him to be gentle, intelligent, kind, soft spoken and insightful.  When I mentioned our work for kids with the Shrine Children's Hospitals, he was very interested. He agreed with our interest in the interconnectivity of all humanity, and our view of the "insane" activities of groups that kill, harm and terrorize others, especially children.  All the more reason he appreciates the work, our 22 hospitals do for kids.

Dr. Chopra invited us to visit him at his home in California, an unexpected blessing of life that we look forward to. Friends are a treasure that we value deeply.  We recommend Deepak Chopra's new book: THE FUTURE OF GOD, to you, as an interesting and challenging study, if you are interested in spiritual insight and growth.