"Water the Battle Comes" Over 100 Protests Across Ireland, because of Fees for Water

This is another of the predictions "Come True" from BootheGlobalPerspectives, as we have written numerous times suggesting that water will become the source of more and more conflict and even wars.  The rising population of the world, plus the increased demand for water for agricultural, industrial, retail and consumer purposes, is creating a situation where water may well be more valuable than oil and people of the world, who have always considered water a "free resource that they have a right to" will find it becoming increasingly expensive. Free water will become a thing of the past.   Water impacts food.  Food prices impact social stability. Social stability impacts political control. It is the same with oil, which also impacts the price of food and the cost to pump water.  As both increase due to greater demand and limited supplies, we are apt to see changes, deep changes in this world. But we should point out that water was only the flash-point for these demonstrations, because the policy of Austerity (which has failed and created social turmoil everywhere it has been introduced) is under attack by people in mass.   If you have property with water resources, you may well be sitting on a very valuable asset. Stay tuned.   BBB

Our credit and thanks to the BBC for originating most of the below story.

Almost 100 separate demonstrations took place in towns and cities across the Republic of Ireland on Saturday. Tens of thousands of people have taken part in nationwide protests against the introduction of water charges in   the Republic of Ireland. Almost 100 separate demonstrations were staged in towns and cities on Saturday, over charges introduced last month. The controversial austerity measure is a key part of the government's plan to pay   back the international financial bailout the state had to seek in 2010. It was one of the largest ever mass protests over Irish government policy. Irish police said they were not able to provide official estimates of the numbers   attending rallies and marches across the state. 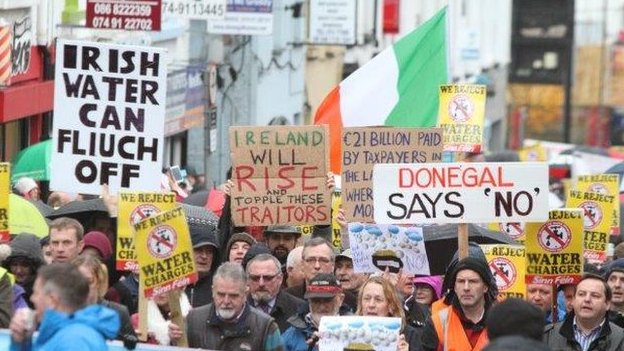 However, Irish state broadcaster, RTÉ, reported that more than 120,000 people attended demonstrations throughout the day.

About 20 protests were staged in Dublin, culminating in a crowd of about 10,000 who gathered outside the General Post Office (GPO) building in the city center.

"It is not just about water charges, it is about all these taxes that have been forced by the greedy and paid for on the backs of the needy”
Éamonn Campbell, The Dubliners

RTÉ estimated that another 10,000 protesters took to the streets of Cork city, while in excess of 8,000 people marched in both Letterkenny and Drogheda.

Demonstrations in Limerick, Waterford, and Dundalk were estimated to have attracted about 5,000 people each.

Thousands of people also took part in smaller protests in Sligo, Navan, Wicklow, Galway, Kilkenny, Wexford, Ashbourne, and Longford, as well as other towns and villages.

Some of the hundreds of people attending a protest in Ringsend, Dublin, told the BBC they do not believe they should pay charges for something that is already free and paid for out of general taxation.

Other protesters said they were opposed to the bonus culture in Irish Water - the company established last month to provide the service. 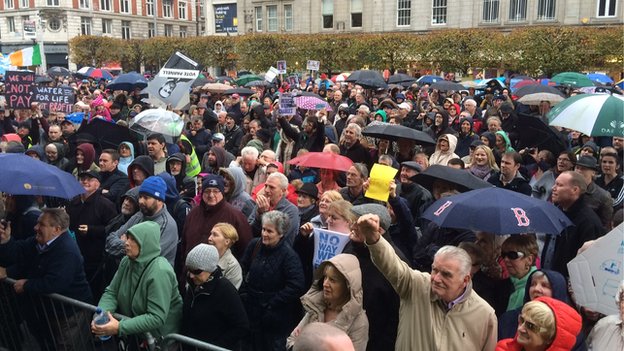 In Dublin, Martin Kennedy said he was taking part in the protests because he wanted to send a message to the government.

"Primarily, people are here today about water charges, but really it's about austerity.  "We've simply had enough," he said.

Anita Stanley, who attended a demonstration in the capital with her mother, also expressed her frustration at the government's policy.

"I'm a young widow, like my mum Ann, and we're here just to say we've had enough," she said. "We can't afford to give any more."

Protesters gathered outside the General Post Office (GPO) building in central Dublin for a mass rally. Éamonn Campbell, renowned as a guitarist with Irish folk music group The Dubliners, was also among the protesters. 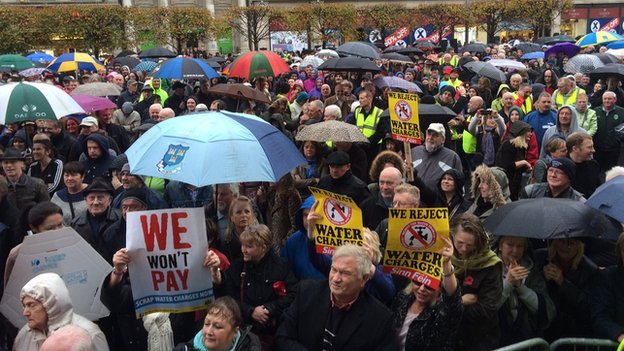 "It is not just about water charges, it is about all these taxes that have been forced by the greedy, both in Ireland and Europe, and paid for on the backs of the needy," he said.

Campaigners who organised some of the demonstrations disagreed with the state broadcaster's estimates and claimed the total number of people who protested was actually closer to 133,000.

Despite the absence of official figures, the Fine Gael/Labour coalition government is clearly worried about the scale of opposition.  A junior minister at the Irish Department of Jobs Enterprise and Innovation, Ged Nash, told

RTÉ radio that "some serious mistakes" had been made in the establishment of Irish Water.

"I think if we were starting again we would have a much longer timeframe to establish what is a very important public utility," Mr Nash said. 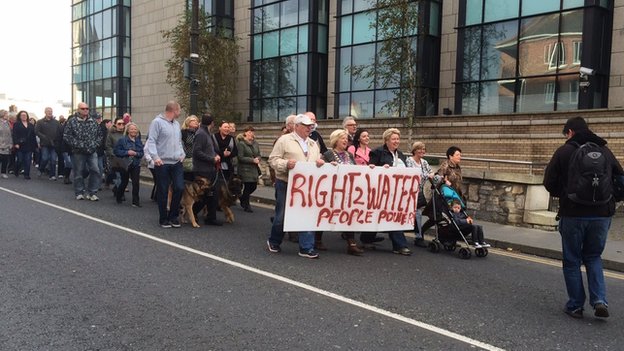 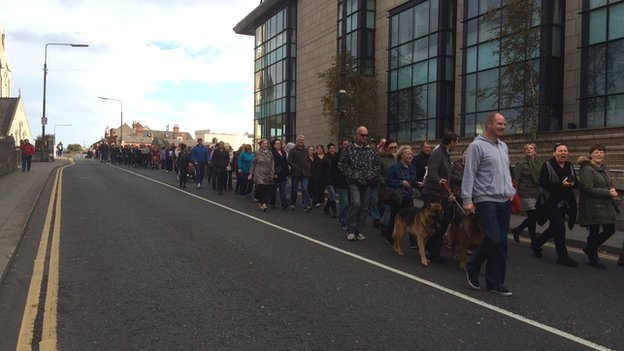 The minister added that the government would respond the public concern over water charges.  "We acknowledge people's anxieties right across the country about issues regarding affordability for water charges and we're prepared to address those," Mr Nash added.

Meanwhile, Irish Deputy Prime Minister (Tánaiste), Joan Burton, said the charges will be modest and capped. Households are due to receive their first water bills in January 2015.

It is the second time in weeks that members of the public have staged mass protests over the controversial government policy. Last month, tens of thousands of people marched through Dublin to show their opposition.

The government said it would respond to public concern about water charges.