Sword of the Valkyrie, by Julie Clark (The best new book we have read in years)

The new book: Sword of the Valkyrie is to have the “Coming out Party” at Hastings Bookstore, on 50th and Indiana in Lubbock, September 27th, 10 AM to 2 PM. Julie Clark, is a farmer/rancher, and poet that was born and raised in the Lamesa area. She has worked in Lubbock area as a nurse for 29 years. 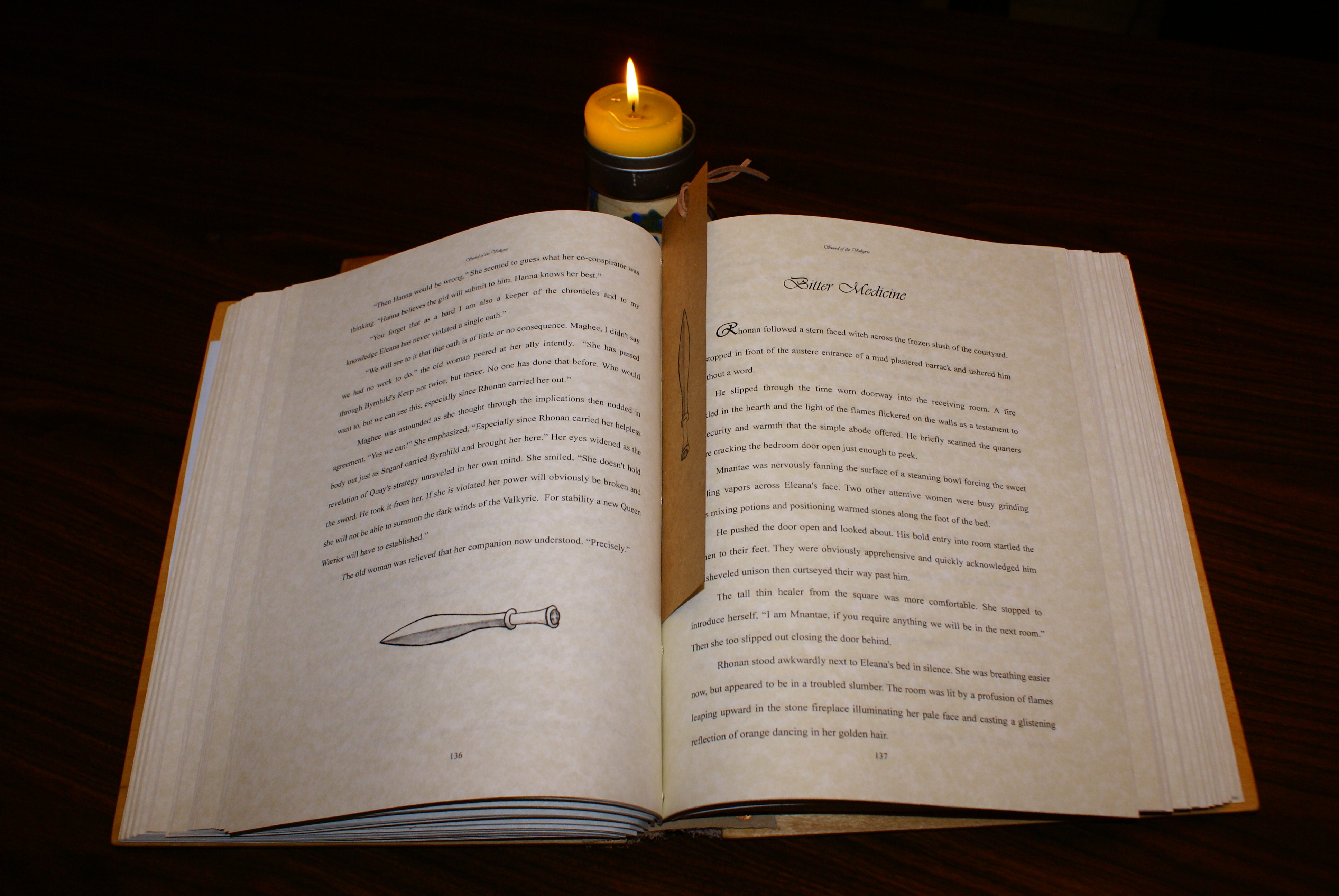 Ben Boothe, of Unicorn Press USA said: “The book is a story of a beautiful young warrior queen of a mountain kingdom, defending her kingdom against an invasion of barbarians. It is written in epic language, striking and fascinating.” What surprised the publisher is: “This came out of the blue. The manuscript was good, and the book riveting.” This story of a woman fighting against powerful forces, trying to maintain her cultural traditions and keeping her integrity, is a “grabber”. Then there is the romance of the foreign King who wants her as “his” queen, and her mixed emotions in wanting to stay in her mountain kingdom and not be controlled by a man, however powerful he is. Alas, what happens here is purely magical. People who have read the manuscript are already begging for a sequel."

The book itself is a unique work of art. Julie Clark along with family and friends from the O'Donnell area have a small assembly line and are making these books by hand.
They are printed on parchment paper and hand sewn with wooden covers and leather backing. The art work in them was done by the author and the books have a look and feel that is reminiscent of the ancient books made a thousand years ago. They are large and decorative with a design that supports the feel and spirit of the story.. Like something from an age past, the book itself is great reading, but just holding it has a warmth of its own.

There will only be 300 of the hand bound books made and a portion of the proceeds from "Sword of the Valkyrie" will be donated to the Shriner's Children's Hospital to help support their good works. The paperback is due to be released in a few months

"It is important that this book get the proper attention and recognition from the land of it’s birth, West Texas. Thus, we scheduled this event in Lubbock, Texas. We want to give Julie a Lubbock welcome to encourage her talent and give the book a great send off.” said Boothe of Unicorn Press USA.  Julie, being a nurse, is making a donation to the Shrine Children's Hospitals with every book that sells.

Sword of the Valkyrie

I found the book to be fast paced and it kept my interest as I always wanted to know more about the characters and its mythical setting. The author’s descriptions of the “Keep” and the Citadel that were hidden in the mountains added to the mystery of the Amazon society.

Eleana is imbued with warrior skills far beyond those found in women in most novels. Her intuition as a warrior and her warrior skills were brought forth in the novel in realistic situations and the author makes these attributes seem normal and appropriate. Eleana was indeed portrayed as a Queen Warrior with great leadership, compassion, and instinct. Eleana was more than just a warrior as her developing romance to the “The Great Bear” Rhonan demonstrated. While she succumbed to love, she also fought to maintain her freedom.

Rhonan is the male complement to Eleana. He is a warrior indeed as well as a gentleman.. He is pulled into the intrigue of the “Keep” and the society of Amazon women. His approach to war and being a warrior is the antithesis of the warriors in Eleana’s Amazon society. The author’s description of the novel settings were vivid and realistic and added to the mystery surrounding Eleana and Rhonan.

Jeppe' the tracker was a unique character as intriguing as Rhonan. Having saved Eleana’s life, he gained the trust of Eleana. The author did a great job of developing the relationship between the two characters.

Given the current popularity of movies based on mystical characters, this novel appears ideal for a movie adaptation especially with the heroine being a woman.