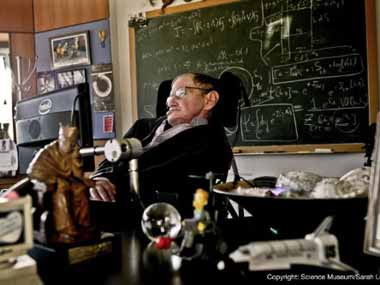 Stephen Hawking is a celebrity genius, who may be a world authority physicist on Higgs Boson.  His recent cryptic comments have huge implications for the cosmos and existence.  Implications beg the questions, elaboration and implications.  We quote this for those who ponder space and time.

The elusive ‘God particle’ discovered by scientists in 2012 has the potential to destroy the universe, famed British physicist Stephen Hawking has warned. According to Hawking, 72, at very high energy levels the Higgs boson, which gives shape and size to everything that exists, could become unstable.

This, he said, could cause a “catastrophic vacuum decay” that would lead space and time to collapse, Express.co.uk reported. “The Higgs potential has the worrisome feature that it might become megastable at energies above 100bn giga-electron-volts (GeV),” Hawking wrote in the preface to a new book called Starmus.

“This could mean that the universe could undergo catastrophic vacuum decay, with a bubble of the true vacuum expanding at the speed of light. This could happen at any time and we wouldn’t see it coming,” said Mr. Hawking.

The Higgs boson, also known as the God particle, was discovered in 2012 by scientists at CERN — who operate the world’s largest particle physics laboratory. Hawking said the likelihood of such a disaster is unlikely to happen in the near future, however, the danger of the Higgs becoming destabilized at high energy is too great to be ignored.

Space, time, matter, gravity, resonant frequencies, harmonics, energy, light, and multiple dimensions and then of course the ultimate question of Why?  All of these come to mind.

Credit  and thanks to F.Living for publishing much of the above, and stimulating readers to deeper questions.