Anytime the first thing you see on the internet about a company is 897 complaints, you must think "If there is smoke there must be fire".

We report good and bad trends from around the world, but a recent experience with Expedia (the online travel company), made us question if they are crooked, incompetent, or simply just don't care! Here is the story, from a credible and real person, you be the judge.

"Through my various endeavors, I travel much.  On August 17, 2014, I got up at 5 AM to book a simple hotel room in Sierra Blanca, Texas (about an hour from El Paso, Texas), on Expedia.  I pressed the button and the computer spit out a confirmation, for a room in New York, City.  Immediately, I called customer service of Expedia and got a service representative, (sounded like he was from India) told him that there was a mistake, and could they please correct it. He said that he would take care of it right away.   I wrote the Expedia customer service email, and explained the problem, and asked them to correct it as well, and they sent back a form letter telling me to write their customer service if there was a problem...something that my letter was already supposed to achieve. So I called again, and got another service rep, this time a woman, and she said she would correct the reservation immediately.  I called the hotel in Sierra Blanca, and they said they had not heard from Expedia and I didn't have a reservation in Texas.  I called the hotel in New York and told them to cancel the reservation because it was a mistake, and they said, they could not cancel or refund, because Expedia would not let them.  I wrote Expedia yet again (by now it was 6:00 AM and nearing my departure time) and told them that their telephone customer service people said they would take care of this but that nothing had happened.

To make it worse, after a 12 hour drive, when I got to the hotel that Expedia was supposed to book me in, there was no reservation, and the hotel had no water, the water lines were broken, so I had to drive to another town to find a hotel.

Today is September 5th, and I got a letter in the mail, that Expedia wrote saying that they would not refund me for the room that they booked in the wrong state, at the wrong price, because "Mr Boothe made no attempt to communicate or inform us of the problem". 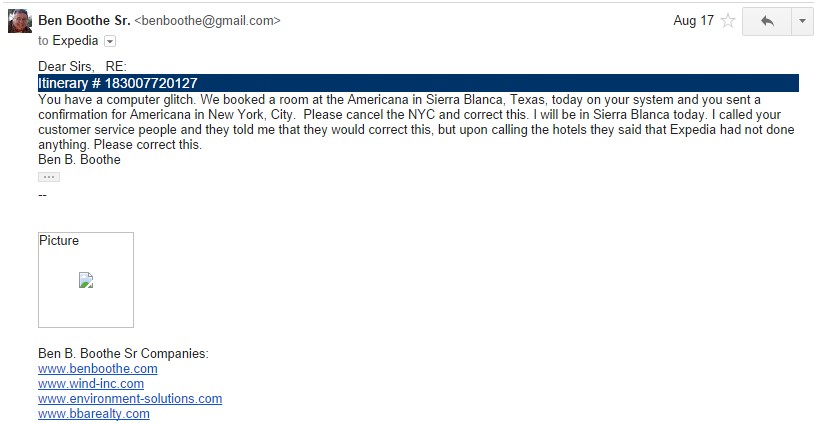 So I telephoned yet again and got another service representative, this one sounded like India, but was very courteous and said: "We will fix this for you right away.'

I waited and called the New York hotel and the Sierra Blanca Hotel and both said that nothing had been fixed, I was going to have to pay for a room in New York City, at 3 times the price, of the hotel Expedia was supposed to have booked for me in Texas.

So here follows the second letter (that Expedia, fraudulently says was never written).

Then I wrote letter number 2:

In frustration, I called again and wrote yet another letter:

These are the facts. Now will Expedia correct this, as an ethical company would and should do, or do they just exploit and move on, as an example of the worst kind of business?  We will report back to you."