Catching the Drift, Chemical Sprays on Food Crops and GMO’s.

Downwind farmers are afraid and you should be too.  Farming practices using toxic chemicals and GMO's may be harmful to your health. 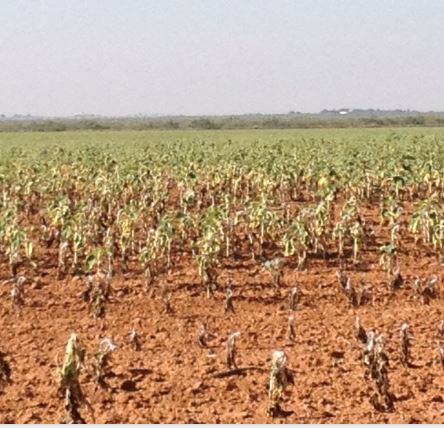 Late July on the Llano Estacado is the time of year when the sunflower fields of West Texas morph into one of the most glorious sights on earth.  Each tall plant sports a majestic yellow pedaled crown. Standing among them in a gentle breeze is like standing in a sea of gold. Contrasting them in a panoramic showcase of color is the blue sky above with an occasional fluffy white cumulous cloud floating by. The peaceful rustling of the leaves is within itself breathtaking. Only the rhythmic cooing of a lone dove in the distance breaks the silence.

It was different this year. There were long swaths of plants not faring as well as others. They seemed sick; some were even dying or already dead.  It is normal that some areas so not produce as well as others, but not like what I witnessed this time.

A local sunflower farmer explained this strange blight that was affecting his field. His answer was surprising.  His fields and those around him were being affected by Glyphosate, a strong herbicide used to control weeds. It is being used all around the world, but has side effects that were not foreseen.

Better known by the trade name Roundup, it has been in use for years and is one of the most effective weed killers available both commercially and for home garden use. It kills almost any green plant that it touches.  Many farmers have filled a three gallon spray can and carefully walked cotton rows spot spraying the weeds. Only now Round Up (Glyphosate) is sprayed indiscriminately on a massive scale with the use of large machinery.

The reason this is possible are the advances in modern crop science. When genetically modified Roundup ready cotton, corn, soybeans, etc. were released, their makers lauded them as the answer to weed problems for farms around the world. What no one thought of then or mentions now are the hundreds of farmers that produce other crops; primarily food crops that are downwind from those massive farm areas, where weed killing conglomerate farmers are spraying glyphosate over hundreds of square miles.  In West Texas farms tend to be big. It is not unusual to find 640 acre farms of the same crop (1 square mile) and when that much is being sprayed at once in a high wind area there is no way to contain the drift. That is what happened this year affecting the numerous sunflower farmers neighboring Roundup Ready cotton.

Acres and acres have been lost and like a small stone in a still pond there will be a ripple after the immediate splash. Those ripples will be felt. There will be a lasting financial effect.  Immediately the sunflower farmers will feel it. The local economy will suffer from their loss, but also long term in the pockets of every one that eats foods that use sunflower products. No one knows are wishes to discuss possible health impacts of food crops with Glyphosate contamination. That is a lot if you read labels.

Requesting anonymity; a farmer, educated and licensed to use the chemicals in question, told me, “Someone needs to do something about this, but everyone is afraid. They’re; well, we are all afraid that if we call the EPA they’ll over reach and take everything away and there’s no point in calling the USDA or the FDA because they approved this stuff in the first place. They go along with everything the big chemical companies want to do. Most farmers that have lost acreage are even afraid to call a lawyer because they’re not sure what the repercussions might be.” He went on the say, “It’s got to stop somewhere. In two years they are going to release a GMO cotton that is resistant to 2-4D.

Now that stuff is really nasty. It can drift twenty or more miles and if Roundup will do this what do you think 2-4D will do. There’s no way of knowing how much or what damage it will cause.”

Citing the premature applause this wonder in weed management received is easy. Now we are learning that while the scientist can genetically modify crops very effectively, some weeds are just as smart and their off spring even smarter. Farmers are beginning to notice the most noxious of weeds are developing their own resistance to glyphosate. They grow side by side with the cotton and famers are having to go back to that old reliable stand by, the hoe. In times that are almost forgotten, school age kids in rural areas took summer jobs in mass numbers hoeing weeds. It appears that “Big-Agri” has benefitted the local rural economies in this one way, summer jobs. After a farmer spends a fortune on questionably safe chemicals he can of necessity bathe his kids in it as they hoe the weeds that chemicals do not kill.

We are told by those who profit from GMO’s and new toxic chemicals, that it is for the benefit of mankind, but the verdict is still out on the direct effect these organisms have on each and every one of us.

There are unknown consequences’ that have caused concerns throughout the world.  Some of those consequences may not be known for years, because it seems that research and testing for potential problems is not funded nearly as well, as for new product releases that might provide quick profits.  We all appear to be in one way or another catching the drift.

About the Author: Julie Clark, raised in the Panhandle of West Texas, grew up in a farming family, studied and became a nurse, and lives on a farm/ranch south of Lubbock. She has done years of research on farming, plant and animal development as well as  chemical impacts on food products.  As a nurse she has a special interest of health impacts of GMO's and chemicals used in agriculture.

Her upcoming book: SWORD OF THE VALKARIE is to be released in 2014.