MUSLIM, BUDDHIST AND GOVERNMENT PERSPECTIVE OF ISIS IN IRAQ

This article outlines three unique and powerful global perspectives all from sources with voice and influence on millions, to terrorism and the absolute horribly evil actions taking place around the world.  Of course, the terror, (bombings of civilians, kidnapping of children, raping of wives, beheading of children, execution of civilian men while they watch their wives and children being herded off to rape and execution),  are in the playbook of immoral people from time immortal. The terror they conduct is supposed to frighten people into submission.

But, more and more people around the world have learned that these acts of violence have lost their ability to frighten…because to be intimidated is to fall within the power of immoral terrorists.  More and more people just see these acts for what they are, disgusting, pathetic, evil tools by ambitious men, who would use their religion, their guns, their knives, even their bodies to desecrate and demean humanity and themselves, in the goal of power, greed, ego and politics.  We see it in the Ukraine (Russia, a Christian nation fighting Ukrainians),  Israel (A Jewish nation bombing Gaza), Gaza (Muslims sending rockets to blast Israel), Iraq (the self proclaimed Islamic State attacking religious minorities, and other Muslims), Nigeria (thugs posing as Muslims kidnapping children, murdering their parents).   These are people doing evil things.

More and more people around the world are adding their voices and energy condemning the evil acts done by men under a pretense of religion. Most of the time it is politics, power, greed and control...not spirituality, and certainly not what any major religion would espouse.

1. Mike Ghouse, Islamic leader, has an audience of 6,000,000 people and he has called for good Islamic people to pray for an end to the violence and call for an end to the leaders of ISIS (ISIL) for their wicked acts. His study of Islam, says what ISIS is doing, has no justification to call their evil acts “religious”, indeed what they do is evil by their own holy book.

2. HH the Dalai Lama, Buddhist leader, who speaks to millions throughout the world, has met with Islamic leaders in India and they have also condemned the acts of ISIS (ISIL) and restated that the Koran speaks against such evil violent acts (thus, showing that ISIL cannot in truth call what they do religious).

3. Finally we see a response from a government. This photograph, of a bombed and destroyed Toyota Pick Up.  ISIS had a host of brand new Toyota Pickups, all equipped with powerful weaponry in the bed of the truck that they proudly drove from Syria into Iraq to conduct their lightning fast shock raids.  The photo shows their ultimate destination, one must wonder if these sad burned Toyota tombs represent trips to heaven, or just a fiery end to evil adventurism…it is the voice of justice and power, with no pretense of religion or terrorism. Simply a message of the ultimate destiny of men, who died hiding under a tree, after doing wicked things.

Muslims to dedicate Friday Sermons for the safety of Christians, Yazidis, Shia and other Minorities, and condemn Terrorist Abu Bakr Al-Baghdadi to prevent the Genocide

Abu Bakr Al-Baghdadi is on a killing spree of Christians, Yazidis, Shia and other Minorities in Iraq and Syria.

We urge Muslims to pray for Sanity to prevail, and urge the World powers to give a final warning to Al-Baghdadi to surrender or face the drones.

In behalf of Muslims, I strongly condemn the evil acts of Abu Bakr Al-Baghdadi for terrorizing Christians, Yazidis, Shia and other minorities in Iraq. He is an evil man and must be caught and processed for his crimes against humanity, there is Genocide in making, and I recommend a bounty be posted to get him dead or alive. 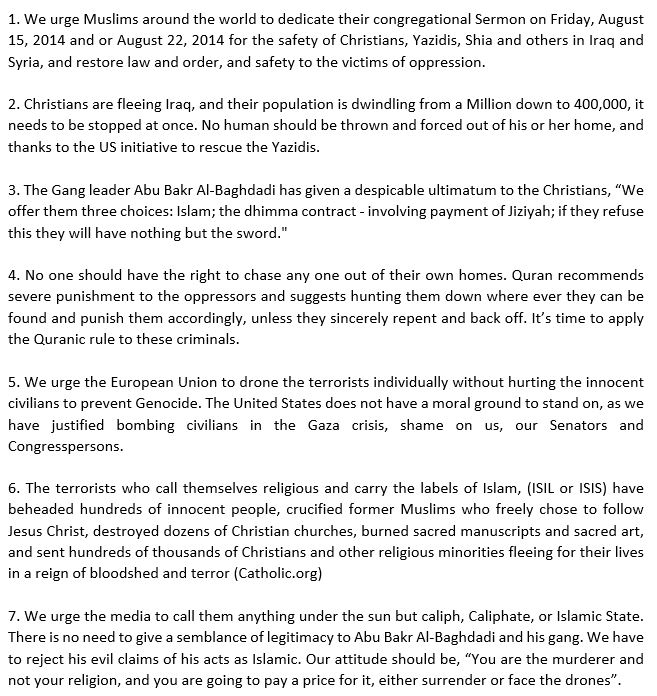 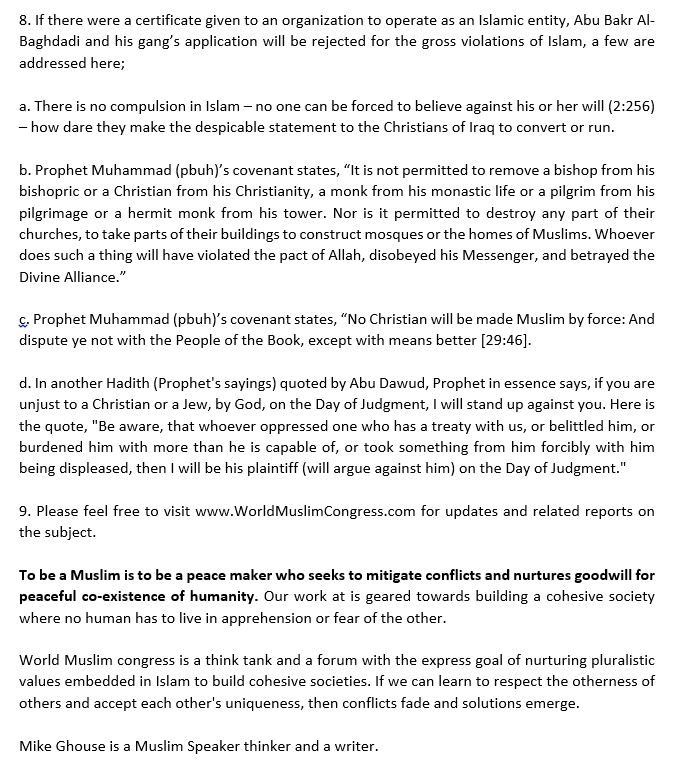 Mike is a thoughtful, brave man, a powerful communicator and an outstanding organizer.  We at  Boothe Global Perspectives recommend that you follow Mike Ghouse and encourage his work.

2. HH the Dalai Lama, PERSPECTIVE (admired and followed by Buddhists throughout the World)

Meeting Hosted with HH the Dalai Lama and by the Muslim Co-ordination Committee, Leh

The Muslim Co-ordination Committee, Leh had invited His Holiness to lunch. In welcoming remarks Saeed Naqvi praised His Holiness for his efforts to promote mutual understanding and for being a symbol of peace and harmony for the whole world. Saif ud din took up the theme saying: 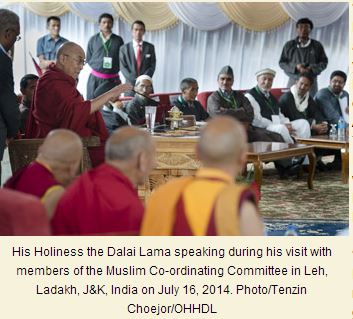 “Today is a great day for us as we are honored by His Holiness’s presence. We admire your work for peace and assure you that Islam denounces violence and bloodshed. Like many in the international community we support your Middle Way Approach to resolving the difficulties in Tibet. We Muslims and Buddhists of Ladakh have long lived in harmony and will continue to do so. We pray for His Holiness’s long life and the fulfilment of his wishes.”

“My Muslim spiritual brothers and sisters,” His Holiness replied, “you organized this meeting and invited me to it, which I greatly appreciate. In the small village where I was born near Kumbum Monastery there were Muslim families so I have long been familiar with people of Islam. When I reached Lhasa at the age of five, about 1000 Muslims lived there and whenever there were government functions Muslim representatives took part. Many of them wore a red hat with a tassel on it.”

At mention of this the one man in the audience wearing such a hat got to his feet and His Holiness teased him saying:

“Yes, just like that, with a tassle that matches you beard. 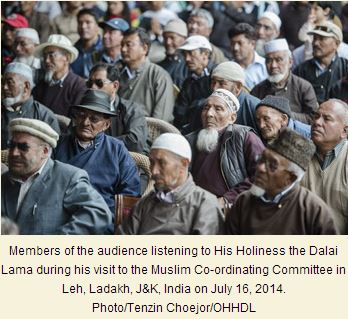 “You may have heard me tell this story before, but the 13th Dalai Lama had had a pocket watch that I began to use. Then one day it stopped and we invited an expert Muslim watchmaker to come and have a look at it. He fixed it, but solemnly told me that a person who carries a watch in his pocket should behave as if he was carrying an egg! A gentle rebuke that I should be more careful.”

His Holiness mentioned that after 1959 many Tibetan Muslims left Tibet and settled in Srinagar. For many years, he said he had been unable to visit them, but renewed his acquaintance two years ago. He spoke of being surprised and touched to discover that their young children spoke good Tibetan with a Lhasa dialect, an indication that they still use Tibetan within their families.

In addition to describing his practice since 1975 of making pilgrimage to other people’s places of worship, which has seen him visit several mosques, making many Muslim friends, he referred to events since September 11th 2001. He recalled attending the first anniversary memorial service in Washington and expressing his conviction that just because the terrorists involved had a Muslim background was no reason for generalizing about a whole community. He pointed out that there are mischievous individuals among Hindus, Jews, Christians and Buddhists, not only among Muslims, and that to generalize about any of these communities on such a basis would be wrong and unfair. He said:

“I’m a Buddhist, but now I often step forward to defend Islam. I often repeat what my friend Farooq Abdhullah the former Chief Minister, explained to me about jihad, that it is not about attacking other people, but about making combat with your own disturbing emotions. If you are about to do someone harm, but you restrain yourself, that’s an instance of jihad, which also has a lot to do with self-discipline.”

His Holiness went on to praise India as a living example of tolerant pluralism, a place where all the world’s major religions live together peacefully side by side. He cited the small Parsee community in Mumbai who have long flourished there without fear. He reiterated that India’s example is a model for the world to follow.

Commenting on the sadness he has felt to hear reports of Buddhists in Burma and Sri Lanka attacking Muslims, he recounted the appeal he had made to them when moved to attack to remember the face of the Buddha. His Holiness is convinced that if the Buddha were present there he would offer the victims protection. In a similar context, considering the conflicts between Sunnis and Shias in various parts of the Middle East and between Christians and Muslims in parts of Africa, he appealed to his listeners to consider ways in which they might influence their Muslim brothers to exercise restraint. He acknowledged that Ladakhi Muslims by themselves might not achieve much, but as part of a larger Indian Muslim community their voice would be heard.

Finally, His Holiness the Dalai Lama noted that although they had invited him to lunch, on this occasion his hosts would not be joining him because they are observing the Ramadan daytime fast. They parted in good will with much affection and intentions to communicate messages of compassion and reconciliation to the world.

3. IS, ISIS, or ISIL WHATEVER  IT'S NAME, BEFORE AND AFTER ENTERING IRAQ

View as IS (ISIS, OR ISIL) entered Iraq. They drove across the country, coming into towns, waving flags, cheering, firing their weapons into the air. It appeared like a sports event. They hit poorly guarded towns and villages, shooting their way in, killing without warning, then kidnapping women and children, raping, and stealing property. They posted photos, bragging of beheading children, wives and husbands. With their new pick ups, they were relentless, filled with bravado.

View of their new pickup after IS (ISIS, or ISIL) entered Iraq. These "brave" IS men (if they could be called such) died, trying to hide under a tree. Their black flag and guns destroyed.  A quote from another religion had the last word here,  Christ said:  "Those who live by the sword will die by the sword".  This photo is a Government Perspective, of how to react to IS, (ISIS, or ISIL). 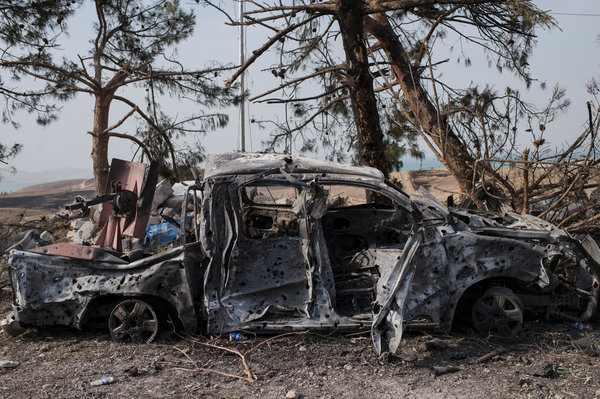