We have discovered and enjoyed the writings of Julie Clark, who lives on a Ranch near Lubbock, Texas. Her vision and perspective is on target and we share this with you, and suggest that you follow her writings.  She will be appearing more in BootheGlobalPerspectives 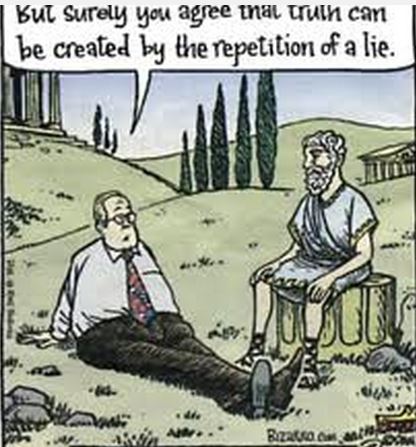 Koch Brother in Therapy With Socrates

The term low information voter seems almost a paradox that should not exist in this age. After all, at your fingertips is access to almost anything one would want to know. Yet the entire political spectrum is full of them and unfortunately profound issues are decided by them with long term detrimental effects on society.

A wise old man once told me during a heated political argument that unless I could thoroughly argue from my opponents point of view that I could not possibly understand or justify my own.  At the time it seemed far fetched, but over the years I have come to realize the immeasurable wisdom of his words.

More and more I see the effects of lack of understanding in the political world. The problem arises from citizens emotionally adopting lop sided ideology. It is easy to do in the age of information. In past days one had to glean information and spend time searching and separating it out. People were forced to be a little more open to opposing points. 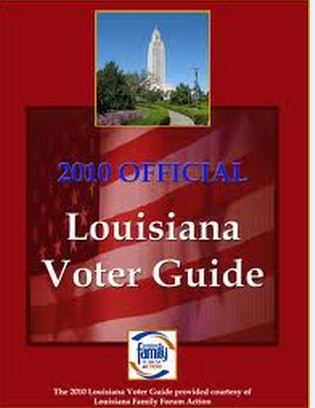 Not so today; a person can easily pull up anything he or she wants and what is usually wanted is some one that agrees. Once several are in agreement it is easy to negate someone that disagrees as inferior. The group unifies to one issue and any one not aligned with the accepted point is viewed as anathema. Then group thinking overpowers logic and the members become so polarized that logical reason is replaced by primitive emotion. Easy access to information has in effect created the low information voter.  Thus everyone from churches, to big business, to special interest groups with "hidden agendas" tell the ignorant and uninformed among us, how to vote.

In essence the problem is one of human nature. We still band together in primitive little groups that one can personally identify with. This is in many ways a good thing but can limit the voters understanding of big issues effecting large societies. The political world is rife with arrogant low information voters and no party is immune. They make easy fodder to feed the ambitions of irresponsible politicians willing to pit them against each other for personal gain.

In order to band his constituents together cohesively, the political leader must identify an adversary. Usually this is someone who will be adversely affected by implementation of the politicians goal. In effect the politician places his or her wants in front of someone else's needs with self-righteous indignation and then finds unswerving support in the low information voter.

The real irony in all of this is the fact that the low information voter is almost always adamant that they are well read and they are well informed. The low information voter researches their point of interest constantly. The problem is that they only research the side that they reflexively sided with. Any other side after all must be inferior or worse immoral. The consensus among all of them is either, “Why would I listen to a bunch of uneducated Rednecks?” or “Why would I want to pay attention to a bunch of liberal nuts?” I have friends and relatives on both sides and realize that both have good points, share similar core values and have the same good intentions and goals for the country. They just disagree on which road to take to get there.  I am saddened because I don't see villains, only unheard and misunderstood individuals with well intended philosophies being pitted against each other.

OFTEN ART AND SYMBOLS ARE USED TO MANIPULATE VOTERS OR TOUCH ON DEEP FEELINGS: 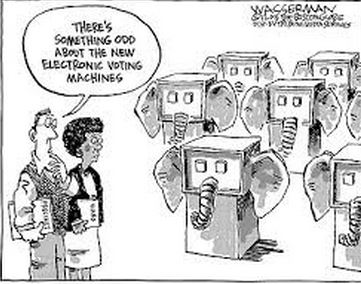 The primary identifying factor of the low information voter is how easily they become frustrated with an opposing view. I have noticed that the less informed the voter is the easier they are to manipulate into an aggressive response. The low information voter for lack of substantive logic lashes out emotionally against a perceived villain rather than discussing a different political position. When Ohio voting machines were programmed to disregard votes for Democrats in one region, or people had to stand in lines for over 8 hours in minority voting areas, people were angry. Violent anger becomes a substitute for thoughtful deliberation. In such a climate fueled by greed and ignorance even when obviously present, common ground cannot be found. Both groups become easy targets for those willing to take advantage of them.

While I do not necessarily have a solution for the willing low information voter, one thing is certain, the emotions of massive numbers of low information voters may cause the foundation of civil society to crumble. The real challenge is for those of us who truly want what is best for this nation to actually study the views and opinions of the other side with unbiased respect. A difference of opinion does not mean enmity, and if you truly can justify and understand your point of view then you will be able to allow the other voter his with courtesy and respect.