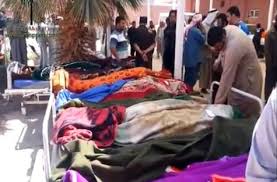 Publishers comment:  In the New Iraq, a time when people are fearful of the religious radicals who are trying to take over the nation, the new "religion" says some women have no value and no rights.  So when hooded men rushed into a house and murdered 27 supposed prostitutes, the police did nothing. The government has done nothing. Because even they are afraid of radicals who in the name of godly religion do evil. I have many friends at the Hindustan newspaper and we appreciate their courage in publishing this article.  Sad and as hard as it is to hear of the plight of prostitutes and the way they survive it is even more horrible to see these hooded thugs murder them in cold blood.

Apartment blocks near a mosque and a kindergarten daubed with cartoon characters seem an unlikely place for the slaughter of 27 alleged prostitutes, but in Baghdad death is never far.

Few people in the Iraqi capital's Zayouna district know any details of what happened in their neighbourhood late on Saturday, and even fewer want to hazard a guess.

Residents of the rubbish-strewn area of crumbling grey apartment blocks say they stopped asking questions long ago in a city awash with guns and gangs and cursed with an ineffectual and politicised police force.

"People are afraid. They don't know their neighbours. Everyone's concerned about the safety of their own family and home. ... Some prostitutes were killed near me a few months ago and the neighbours only found out days later because of the smell," said Zayouna resident Wissam Sami, 23, a student.

"I don't know who carries out these killings. Both Daash and the Shiite militias wear black and anyone can buy a uniform or fake an identity card."

Daash is the Arabic acronym for the Islamic State of Iraq and the Levant jihadist group, now known as Islamic State, which last month overran swathes of northern and western Iraq. The word is often used as a catch-all term for Sunni militants.

"This is the fate of any prostitution," read a inscription on the door of the one of the raided buildings.

Zayouna residents say that local apartments have long been used for prostitution and that alleged sex workers are found murdered every few months, with police unwilling or unable to prevent the attacks.

"If a person got shot right next to a policeman they wouldn't say anything. They're afraid. It's the rule of the strong over the weak," said a shopkeeper who declined to be identified.

"So what if they were prostitutes? It's God who judges us, after all."

Other Zayouna residents were less sympathetic. Prostitution is a highly taboo subject in conservative Iraq, where religious political parties have risen to prominence in recent years.

"People are tired of the prostitutes. They attract criminals and immoral people," said another shopkeeper who also did not want to be identified by name. 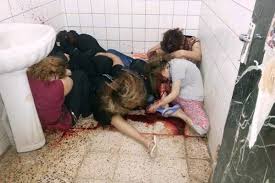 Questions about motives for the attack and the identity of the gunmen were in most cases met by a wall of silence.

Shiite militias with connections to political parties hold sway over parts of Baghdad, while suicide blasts by Sunni extremists are still frequent, with sectarian killings on both sides routine.

Both groups' extreme antipathy to sex workers is probably one of the few things they have in common.

"Everyone's afraid. Let me be killed but I have to say what's in my heart. I'm a Shiite, and I'm telling you these were Shiite gangs. Who else controls Baghdad? They're more powerful than the police and any other authority," said tattooed taxi driver Hassan Assad, 36, who works in Zayouna.

"The prostitutes have been here since Saddam's time. Why do you think they're doing this? Because their husband has been imprisoned or killed and they're trying to feed their kids. How did Iraq come to this?"