ISIS, (ISIL) WHAT YOU SHOULD KNOW, THE BUSINESS OF WAR

Primer: What You Should Know about ISIS.  (Islamic State of Iraq and the Levant

What it is and what it is not:

It is not a group of high minded idealists, fighting for freedom. They are shrewd propagandists fighting for control.

It is not a group of deep spiritual young men, seeking to do good deeds for solely religious motives. Their brotherhood is a band of warriors, and spirituality is scant.

It looks like an army, but it is business based upon traditional invasion, looting and murder. They have no hesitation to destroy culture, religion and impoverish people who may have assets.

The guys with guns, are not crusaders, they are  some of the best paid mercenaries in the Middle East.

The pattern of this organization is cut of the same cloth as militant Islamic expansionists for 1500 years.

Leave no doubt, while they speak of religion, they seize money and long for control. Even as they pray and posture, what they demand is power and control. When they speak of freedom, they execute, rob, rape and then control with deadly force.

ISIS is of the wealthiest terrorist organizations in the world, more wealth that al Qaeda, al Shabab or the Taliban. It is reported to have about $2 billion in assets.

What is next?  Groups like this do well, especially at first when fighting battles against half trained kids who have a gun and uniform and nothing else. But groups like this tend to divide and self-destruct when things slow down, the big bucks of theft and looting ceases and they actually have to build civilized  institutional organization. Recent reports indicate that ISIS is constructing a military camp north of Mosul designed to house 10,000 soldiers. They will not be happy there idle for long. Holding a big gun, to be a big man, to terrorize another human can only entertain people like this for so long.

Other insights: (Our thanks and credit to Rannie Amiri, a commentator on the Middle East for much of the following section)

Directly and indirectly, covertly and overtly, by word and by deed, nations of the Gulf Cooperation Council (GCC) have long bolstered extremist groups operating in the Middle East and beyond. They include the Taliban, al-Qaeda, and the latter’s most recent incarnation, the Islamic State of Iraq and Greater Syria (ISIS).

The six-country economic and political bloc known as the GCC is spearheaded by Saudi Arabia and Qatar in support of takfiri organizations fighting in the Syrian civil war. Now the standout of the bunch, true to their name, has moved on to the Iraqi theater after seizing Mosul ($400,000,000 from its bank) and nearby cities.

Without doubt, Maliki has been inept in forming a cohesive, inclusive governing coalition during his tenure. That said, he is a target of blame, not the real cause for ISIS’s well-armed, well-financed and coordinated attack on Mosul. Their limited fighters and successful takeover of Iraq’s second-largest city speak more to their support—not necessarily among ordinary Sunnis who at heart are repulsed by foreign invaders and their import of religious law—but from regional powers who share a similar vision: the overthrow of Maliki’s government specifically, and Shia-majority rule in Iraq generally. Not insignificant was the tactical assistance provided by opportunistic Saddamist parties like the New Ba’ath Party of former Vice President Izzat Ibrahim al-Douri and the affiliated Naqshabandi Army.

As corrupt and dysfunctional as Maliki’s rule has been, certain Gulf regimes remain unhappy at the reversal of fortunes Iraq has seen since Saddam Hussein’s ouster (despite his invasion of Kuwait, he was much preferred to any popularly-elected leader), especially its close relations with Iran

Saudi Arabia, Qatar, Kuwait and the United Arab Emirates are quite content to see militants from ISIS, Jabhat al-Nusra and others operate far from their borders, although they are keenly aware the Frankensteins they created will turn on them in an instant if given the opportunity. Hence, these jihadist groups are kept at an arm’s length, busy settling scores and waging their financiers’ sectarian battles elsewhere in Lebanon, Syria and Iraq. But early developments already point to the unintended consequences the ISIS-GCC alliance will inevitably bring, to the chagrin of both King Abdullah and the Emir of Qatar. Indeed, as Hasan Nasrallah recently stated, the magic may yet turn against the magicians.

The hope of the GCC is for:

The Risk:  ISIS will only hasten a rapprochement between the United States and Iran as they share a common enemy. The notion of joint military action by U.S. and Iranian forces is more likely today and the media’s mere mention of the possibility certainly sent shockwaves through Doha and Riyadh (and Tel Aviv). In addition, the United Kingdom already announced its embassy in Tehran is set to reopen with limited staff. 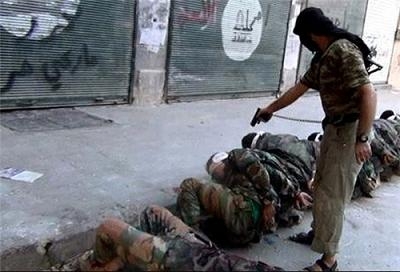 Once the brutish, draconian behavior of ISIS becomes apparent their support will prove illusory as Sunni Arab tribes ultimately turn against them.

In return, Sunnis are likely to demand meaningful political concessions from Maliki and IF he survives, he would be wise to seize the opportunity for reconciliation. Such cooperation between Sunni and Shia Iraqis will be anathema to those planning for the country’s partition and collapse, and a fitting rebuke to both ISIS and the GCC.

As for the future of Iraq.  In the pages of Global Perspectives, we cautioned George W. Bush about going into this war, before we entered Iraq.

"When we depart, we will have lost billions in treasure, and lost thousands of precious American lives. And when we are gone, Iraq will still be the troubled, divided land that it was before we went there."

Global Perspectives Comment: In general, Americans did not, does not understand the religion, the culture, the history, the hatred which has come from decades, centuries of conflict In the Middle East. It is a troubled region, by our standards corrupt, dramatic, inconsistent and lacking in love and compassion for humanity.  We do not speak the heart language of the Middle East because there are monied and affluent fountains of oil wealth that pay to keep the divisions alive, for fear and for survival. We should realize that we as Americans cannot stop them from their chosen privilege of sending their own to whatever heaven (or hell) their culture prescribes. Certainly, as we said in this very column 9 years ago, "The entire land is not worth the blood of even one of our American boys." Sadly, the radicals there do a good job of filling their gutters with the blood of their own children, it is the legacy of the Middle East, death in the name of politics, hidden behind the veil of religious fanaticism.