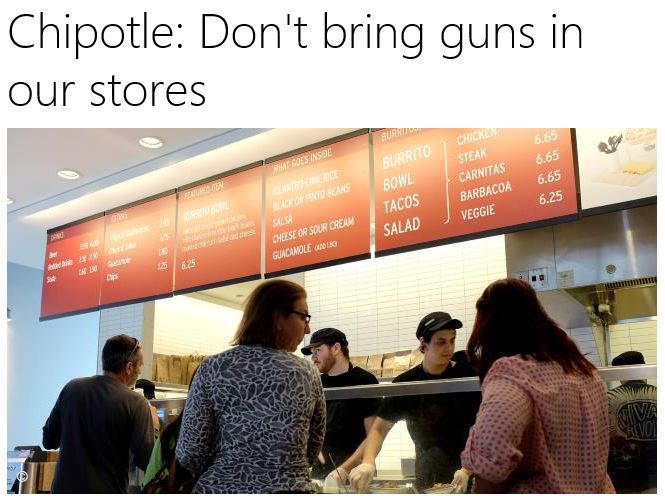 A growing number of businesses are posting "no guns allowed" in their stores finding customer resistance to people carrying weapons openly growing.

"I just don't feel comfortable with someone displaying a gun beside me, especially when my children or family members are next to me." one father told Global Perspectives.   The quiet movement has expanded to other types of institutions. A deacon in a church informed us: "Churches around the nation have quietly trained their ushers to watch the doors and be on alert for gun carriers."  People are quietly asked to leave or to not carry weapons in church.  Some businesses such as movie theater chains and malls have instructed their guards to quietly ask "gun carriers" to leave, or take their weapons outside.

Chipotle is asking customers not to bring firearms into its stores after it says gun rights advocates brought military-style assault rifles into one of its restaurants in Texas.

Ernst Diener,  a sociologist,  himself a gun owner said: "One must wonder about the wisdom, or lack thereof of any person who would walk into a retail business with an assault type gun in his hands."

With a nation that has become awash in assault style guns, in what had been an artificial "run on guns" promoted by gun activists and organizations such as the NRA repeating a myth that President Obama wanted to seize all guns.  In recent months, gun sales and ammunition sales have dropped 30% or more, as the national mood has turned against the random arming of the country with high powered automatic weapons, designed primarily for killing humans. Now national chain stores and franchises, are stepping and saying "enough".

The Denver-based company notes that it has traditionally complied with local laws regarding open and concealed firearms.

But in a statement Monday, the company said that "the display of firearms in our restaurants has now created an environment that is potentially intimidating or uncomfortable for many of our customers."

The announcement came after a petition by Moms Demand Action for Gun Sense in America, which has called on other companies to ban firearms in their stores as well. The group said its petition was in reaction to open-carry gun activists appearing at a Dallas-area Chipotle restaurant over the weekend.

Recently Starbucks announced a similar move, asking their customers to leave their guns at home and not bring them into Starbucks.  With politicians unable, or unwilling to stand up to NRA and other lobby groups, on gun issues, consumer businesses are trying to take steps to lower the "gun environment" .

Psychologists have commented on the many motivations causing some people to feel that they have to carry and publically display guns. The reasons run from insecurity, a need for attention, a hunger for power, a need for respect, anger at society and a need to intimidate. "All of these motives can become negative,  even dangerous" said Diener.

Global Perspectives commends Chipolte and Starbucks for their courage and good sense in banning guns in their stores.