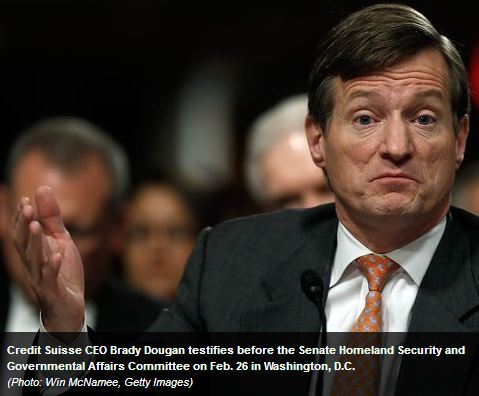 Indeed if the bank was an individual, it could not vote in most of the states of the
United States, because Credit Suisse has been found guilt of a felony, a criminal act.  Thus, when you walk into this bank, or the others that appear to be on a list of big banks under investigation for crimes just as bad, know that every person in that institution is working for a "felon" and are part of an institution guilty of criminal acts. One would hope that there is still some sense of shame there, but we doubt it. Why, we wonder? Could it be because they were helping other rich people cheat on paying their lawful taxes?  Our nation, the USA, has generously blessed so many an allowed them opportunity to become hugely wealthy. Yet, they then cheat our system, the very nation that gave them this opportunity by not paying their fair share of taxes.  So much for "patriotism and loyalty" of  wealthy Americans to America.

Something about the expression on the face of CEO Brady Dougan doesn't appear all too shamed or sad about this event.

When I was a bank President and founder we had a standard that my banks were to be beyond reproach.  We would not break the law and we would abide by the high standard of ethics that we urged upon those to whom we loaned money to.    What ever happened to the concept of integrity in banking among the big boys?  Whatever happened to the concept that a "Banker's word is his bond?"  Yesterday I got a phone call from a man who had been promised large loan by his bankers. Out of the blue and with little explanation, the banker called and said: "Oh, we have changed the terms and cannot do that loan as we promised."  One must ask, what has gone wrong in the training or executive direction of our banking leaders these days.  When a society cannot rely upon the word and good example of our bankers, something is dreadfully wrong in the banking system.   Our advice to you is that if you have a rare banker, who is 100% truthful and dependable, count your lucky stars, because it appears that those we thought were the biggest and the best, seem to be cut from a different cloth.    Credit Suisse, guilty of felony and criminal charges. 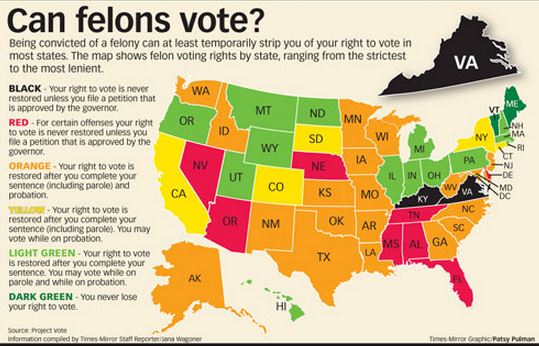 The idea of a double standard for crooked banks and bankers took a hit this week.  Politicians who desire big money contributions from banks have long argued that  corporations should be treated like individuals.  Now a bank can be a felon and has been convicted of felony. But alas, unlike most of us poor human beings, who might have to go to jail, or banned from voting, Credit Suisse, just digs down into it's pot of billions and pays a fine and goes on down the road.  Why? Political pressure not to "harm a bank, it might hurt the economy". 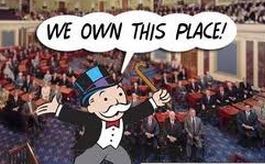 This becomes another in a long line of banks which have violated  regulations and the negative part is that it becomes another example of how the big banking systems can pay penalties and "buy" their way out of the most severe crimes that an ordinary citizen would have to face.  It would seem that big money is calling the shots, more and more. Even to the extent of defining how and to what extent our government tries to enforce "our" laws.

The US Government which could have taken actions to put the bank out of business instead (for the sake of the overall economy) allowed the bank to pay fines and continue to do business.

It was proven that the bank had for years engaged in tax evasion activities particularly for wealthy clients.

American banks like JPMorgan Chase and Citigroup, have been mentioned as American banks that might be looked at for evaluation as to whether they may have committed criminal activities.

“This case shows that no financial institution, no matter its size or global reach, is above the law,” the United States attorney general, Eric H. Holder Jr., said at a news conference on Monday.

“This coordination was imperative,” Mr. Holder said in describing the process of the prosecution.

“Credit Suisse is a really big case, but people want to see accountability for the global financial crisis, and this just won’t do that,” said Brandon L. Garrett, a professor at the University of Virginia School of Law and the author of a new book, “Too Big to Jail: How Prosecutors Compromise With Corporations.”

The idea that a criminal conviction could jeopardize the financial system stems from the experience of Arthur Andersen, Enron’s accounting firm. In the aftermath of a 2002 criminal conviction, Arthur Andersen closed. This has been used as an argument that banks should not be pressed to obey the lay as fully as other entities.  The bank will pay $1.8 billion to the Justice Department. And $715 million will go to Mr. Lawsky, who forced the bank to hire an independent monitor to oversee operations in Switzerland and the United States. The bank will also pay $100 million to the Fed.  But it appears that even though it is a criminal offense, we see no evidence of anyone going to jail. 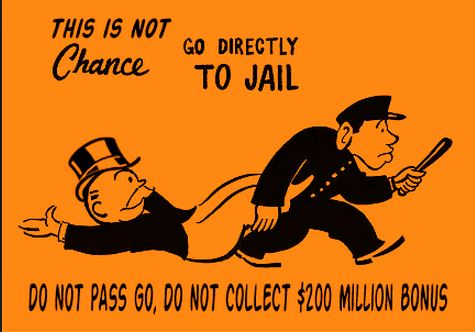 Even in a game of Monopoly, the man with the top hat goes to jail sometimes.

The federal money will flow to the Treasury, while the payment to Mr. Lawsky will enter New York state’s coffers. Mr. Lawsky also required Credit Suisse to keep a record of all its American transactions in the United States, a measure against Swiss secrecy.

The bank’s conduct came to light during an investigation by Senator Carl Levin, the Michigan Democrat who runs the Senate’s Permanent Subcommittee on Investigations. That investigation, which relied on 100,000 internal documents, culminated in February with a scathing report showing how the bank helped Americans hide their wealth through Swiss bank accounts.

We must again ask the questions that we have been asking for two decades now. Why does our government, our courts, our people allow the richest and most powerful institutions in America get away with breaking the laws, that at one time established the United States as the best in moral business principals? It would seem to us at Global Perspectives that something is dreadfully

We at Global Perspectives believe in capitalism. We believe in fair business, fair dealings and fair risk and reward systems. We have been around the world countless times and have seen nation after nation lose respect for "Big Business" in the United States of America.  At one time, other nations begged us, paid us to come and show them "How It is Done in America".  Today, we are scorned because of a new breed of immoral bank executives have kidnapped the industry and made it more like a fast shell game, using symbolic money and questionable tactics to satisfy raw greed in spite of the cultural and ethical consequences.  While we applaud our leaders for prosecuting this case, we believe there should be a "house cleaning" to get rid of  those who are destroying confidence in our system. Our bankers should be the finest example of integrity and honesty. It is up to all of us who believe in capitalism to insist that bank executives, be absolutely honest, trustworthy and absolutely willing and able to keep their commitments. A banker must not only be good. He must as my mentor, Marvin Carlile taught me: "Avoid even the appearance of evil."  Remind your banker of your expectations and if you cannot rely upon your banker's promises, then you must reevaluate your banking relationship. 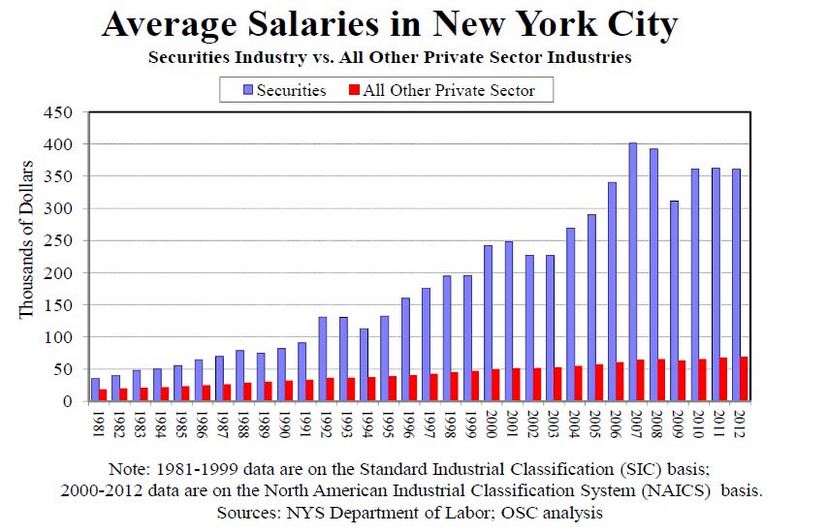 We see the average salaries of CEO's in New York City, supposedly the nations financial capital,and note that these (mostly male) executives are making far more than their average bank customer and then being found guilty of fraud, abuse, felony violations, something smells wrong out there.
How can we look up to felons who are making $375,000 per year, (some in the millions), while 90% of their customers are struggling by on 1/8 th of that level while most most Americans try to live honestly, pay their taxes, and try to cherish what is left of the American dream?  We don't resent them making money, it is a terrific goal for all capitalists, to make more. But, whatever happened to teaching that we need to make it in the right way and then use it in the right way after we have made it?