Note from the publisher of Global Perspectives:

We give full credit to AP and Seth Borenstein for the following article. It confirms what we have been reporting from throughout the world for over 15 years.  Most of our stories have been confirmed 'on site' whether we have written from Asia, Latin America, or the Gulf of Mexico during the BP spill. Our perspective has been broad, and from people and industries in direct witness who have been impacted by the changes in our weather pattern. The U.S. Congress mandated a complete study and report on Climate Change and the Environment, and that report has been written and reviewed by over 200 of the world's leading scientists and experts on weather and the environment. It may be the most comprehensive report ever written on climate change.  A draft of the report is available to the public and we recommend that you get a copy and read it.  In the meantime, the following story is on point and well written.  Boothe Global Perspectives,  Ben B. Boothe, Sr. 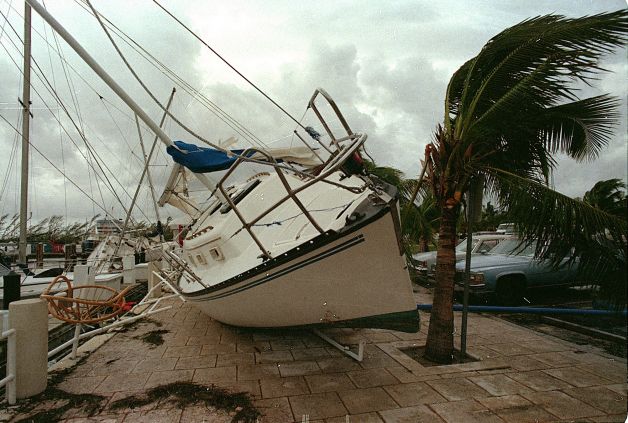 FILE - In this Aug. 24, 1992 file photo, a sailboat sits on a sidewalk at Dinner Key in Miami after it was washed ashore by Hurricane Andrew. Global warming is rapidly turning America into a stormy and dangerous place, with rising seas and disasters upending lives from flood-stricken Florida to the wildfire-ravaged West, the National Climate Assessment concluded Tuesday, May 6, 2014. (AP Photo/Terry Renna, File)

WASHINGTON (AP) - When it came time to deliver a new federal report detailing what global warming is doing to America and the dire forecast for the future, President Barack Obama turned to the pros who regularly deliver the bad news about wild weather: TV meteorologists.

"We want to emphasize to the public, this is not some distant problem of the future. This is a problem that is affecting Americans right now," Obama told "Today" show weathercaster Al Roker. "Whether it means increased flooding, greater vulnerability to drought, more severe wildfires - all these things are having an impact on Americans as we speak."

Climate change's assorted harms "are expected to become increasingly disruptive across the nation throughout this century and beyond," the National Climate Assessment concluded, emphasizing the impact of too-wild weather as well as simple warming.

Still, it's not too late to prevent the worst of climate change, says the 840-page report, which the Obama administration is highlighting as it tries to jump-start often-stalled efforts to curb heat-trapping gases. Said White House science adviser John Holdren, "It's a good-news story about the many opportunities to take cost-effective actions to reduce the damage."

Release of the report, the third edition of a congressionally mandated study, gives Obama an opportunity to ground his campaign against climate change in science and numbers, endeavoring to blunt the arguments of those who question the idea and human contributions to such changes. Later this summer, the administration plans to propose new regulations restricting gases that come from existing coal-fired power plants.

Not everyone is convinced.

Some fossil energy groups, conservative think tanks and Republican senators immediately assailed the report as "alarmist." Senate Republican leader Mitch McConnell of Kentucky said Obama was likely to "use the platform to renew his call for a national energy tax. And I'm sure he'll get loud cheers from liberal elites - from the kind of people who leave a giant carbon footprint and then lecture everybody else about low-flow toilets."

Since taking office, Obama has not proposed a specific tax on fossil fuel emissions. He has proposed a system that caps emissions and allows companies to trade carbon pollution credits, but it has failed in Congress.

Republican Sen. David Vitter of Louisiana said the report was supposed to be scientific but "it's more of a political one used to justify government overreach." And leaders in the fossil fuel industry, which is responsible for a large amount of the heat-trapping carbon dioxide, said their energy is needed and America can't afford to cut back.

"Whether you agree or disagree with the report, the question is: What are you going to do about it? To us that is a major question," said Charlie Drevna, president of the American Fuel and Petrochemical Manufacturers. He called the report "overblown."

The report - it's full of figures, charts and other research-generated graphics - includes 3,096 footnotes referring to other mostly peer-reviewed research. It was written by more than 250 scientists and government officials, starting in 2012. A draft was released in January 2013, but this version has been reviewed by more scientists, including twice by the National Academy of Sciences, which called it "reasonable" and "a valuable resource."

Scientists and the White House called it the most detailed and U.S.-focused scientific report on global warming.

The report looks at regional and state-level effects of global warming, compared with recent reports from the United Nations that lumped all of North America together.

"All Americans will find things that matter to them in this report," said scientist Jerry Melillo of the Marine Biological Laboratory, who chaired the science committee that wrote it. "For decades we've been collecting the dots about climate change; now we're connecting those dots."

Even though the nation's average temperature has risen by between 1.3 and 1.9 degrees since record-keeping began in 1895, it's in the big, wild weather where the average person feels climate change the most, said co-author Katharine Hayhoe, a Texas Tech University climate scientist. Extreme weather hits us in the pocketbook and can be seen with our own eyes, she said.

The report says the intensity, frequency and duration of the strongest Atlantic hurricanes have increased since the early 1980s, but it is still uncertain how much of that is from man-made warming. Winter storms have increased in frequency and intensity and have shifted northward since the 1950s, it says. Also, heavy downpours are increasing - by 71 percent in the Northeast. Heat waves, such as those in Texas in 2011 and the Midwest in 2012, are projected to intensify nationwide. Droughts in the Southwest are expected to get stronger. Sea level has risen 8 inches since 1880 and is projected to rise between 1 foot and 4 feet by 2100.

Climate data center chief Karl highlighted the increase in downpours. He said last week's drenching, when Pensacola, Florida, got up to 2 feet of rain in one storm and parts of the East had 3 inches in one day, is what he's talking about.

The report says "climate change threatens human health and well-being in many ways." Those include smoke-filled air from wildfires, smoggy air from pollution, and more diseases from tainted food, water, mosquitoes and ticks. And the ragweed pollen season has lengthened.

Flooding alone may cost $325 billion by the year 2100 in one of the worst-case scenarios, with $130 billion of that in Florida, the report says. Already the droughts and heat waves of 2011 and 2012 have added about $10 billion to farm costs, the report says.