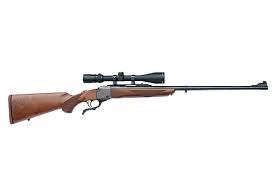 Saturday I was in New Hampshire home of one of the most successful gun manufacturing companies in The USA.  while in Newport, New Hampshire one of the most informed men in the industry told me that "Big Box, big store sales of guns dropped by over 30% in the last 2 months". My source confirmed what we predicted 6 months ago. At that time BootheGlobalPerspectives reported that the gun and ammunition rush was an artificial crisis created by gun activists, and groups such as the NRA who mixed the love of guns with a political opposition of President Obama and then blamed the artificial crisis of their creation on the President.

While in New Hampshire we interviewed avid hunters. One said: "No respectable hunter needs more than one shot to kill a deer. The second shot is always too late, the third shot is just for noise."  Of course, the gun rage for automatic assault rifles and "machine gun" military replicas has nothing to do with true sports hunting.  It is a mixture of politics, anger and myth, all mixed with rabid emotions.

"Some of these people are a bit off the wall, they have been listening to Rush Limbaugh or Glen Beck too long."  gun dealer  Mike Davis told me.  Jim Cavanaugh former ATM officer appeared on the Rachael Maddox program recently and gave a historical background of the many "fringe groups" in the USA that have stockpiled weapons and have become problems leading to social conflict and deaths in our nation.

Notice recent articles from Bloomburg Business Week, CNN and others and you can follow how this is playing out. For one, I have little sympathy for the people who "willingly believed" the propaganda and now have stacks and piles of shells filling their closets. The issue is a hybrid mixture of social cultural background, right wing political activism, misplaced patriotism,  paranoia of a myth of government law enforcement wanting to seize people's weapons, and imagined empowerment of having guns (a lot of guns). It brings a sad smile to my face as I imagine them trying to figure out what to do with all of those boxes of ammunition.  I fear that we will hear more stories of houses burning and exploding like ammunition dumps or children playing with ammo, hurting themselves and others by accident. Worse the acceleration of kids "taking the guns from dad's collection" and  using them in emotional mass killings continues to expand, as the promulgation of guns expands. Almost every week we hear of another domestic killing or child rampage, using powerful assualt and automatic weapons.

We quote portions of an article by Bloomberg Business below and credit them for reporting on this.  I also confirmed the decline of gun and ammo sales, during a personal interview with a high level source personally familiar with gun manufacturing in New England. 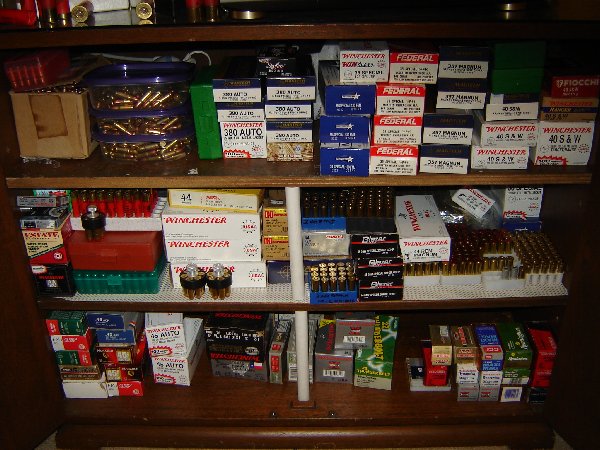 Americans, apparently, may finally have enough guns and ammunition. The gun case at the left, is a conservative example of what hoarders have been doing. Some have entire rooms or storage areas, piled up with ammunition. Some have military style boxes full of "rounds".  We saw a report and photo of a garage that was filled with guns and ammunition, probably worth more than the man's small home.

Cabela’s (CAB), a chain of outdoor stores that specialize in hunting and fishing equipment, said this morning the firearms market is cooling drastically.

Sales at Cabela’s stores open more than one year plummeted 10.1 percent in the recent quarter, primarily because of sluggish firearms sales and a “much sharper than expected” decline in ammunition buying, says Chief Executive Tommy Millner. Excluding guns and ammo, same-store sales were down only 3.5 percent for the retailer, which is based in Sidney, Neb.

Gun and ammo manufacturers, report overall orders down over 30+ in many markets.

The thinning crowd of gun buyers should not have been a surprise. In October, Cabela’s warned that the market was cooling “significantly.” FBI background checks, a leading indicator of firearm demand, have also been dropping. Federal applications to make a gun purchase last month were one-third fewer than a year ago.

The industry, meanwhile, is coming off record highs. Background checks peaked immediately after the Sandy Hook elementary school massacre in December 2012, on fears that tighter gun control laws would soon follow. But such legislation never really materialized, and background checks started tailing off over the summer.

At an analyst meeting early this month, Smith & Wesson (SWHC) CEO James Debney said the industry is “coming out of this surge period into what we would call a more normal environment, which is generally free of influence of some fear or uncertainty about increased legislation.”

Some people used life savings or even family budget money to create their hoard of ammunition. Finally now they know that the Obama gun scare was simply a myth, used by some, to profit at the expense of the easily manipulated people of our culture. 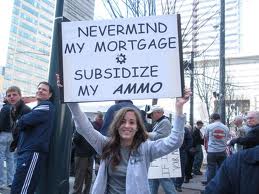 Like the photo of the young woman who apparently prefered to have funds for ammo, instead of her home mortgage, some people have been a bit unbalanced on this issue.  Americans, apparently, may finally have enough guns and ammunition. Most Americans know now that there is no shortage of either.  Reasonable Americans know that the US Government is not trying to "get their guns", nor is the government hoarding ammo. Indeed in one report, recent purchases of ammo for Homeland Security are lower than in prior periods.

Most Americans know, that our government, the FBI, the police, the local Sheriff, are there to protect us and enforce the law, not to "take our guns".  A bank president in a small town of Central/West Texas told me recently that he wanted his loan officers to have assault rifles, "To protect ourselves from the government".  Those kind of people simply do not reflect attitudes of the majority of Americans and by most measures would be considered "fringe" thinkers. But it was the energy and impetus of people like that which created the "gun and ammo shortage", the USA has recently come out of.

The hoarders might be better off to use that excess money to send their kids and grandkids to college.  Or just chill out, and take a vacation.  Our advice, honestly study and research gun and ammunition manufacturing and supply.

Education and enlightenment will go far to deal with mistakes like this in the future.