Odds of War in Ukraine? Probable Results of Russian Invasion 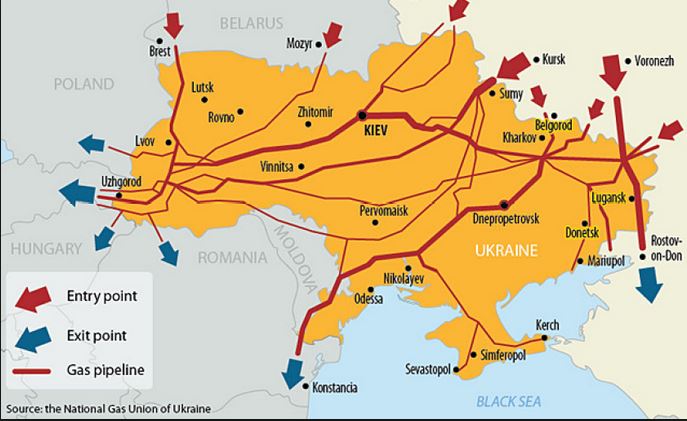 The map, in our opinion tells the story of Ukraine.

Ukraine is valuable to Russia for 2 main reasons:

Ocean access which has long been a strategic obsession with Russia.

Through oil and gas, Russia and intimidate other nations, and through the access to the black sea, Russia is not land locked.

Now the question arises. What are the odds that Europe and the USA would actually go to war with Russia to protect the Ukraine?  We doubt that Europe would do this, unless a cut off of oil and gas threatened their national economies.  The USA would be more likely to take such an action, and if it did, it would be a large, long term commitment, supported by both Democrat and Republican leaders.  The American people would resist a long expensive war with Russia but would eventually go along with such a conflict. Gradually Europe and other nations would join in the conflict, most of them against Russia for strategic and economic reasons.

What are the odds that Russia would cut off oil and gas supplies to Europe if conflict turns to military violence?  Probabilities are good that Russia would play the “energy” card. In any event, a war in the Ukraine would likely destroy the pipelines that go to Europe.

If Russia cut off oil and gas supplies to Europe, or war damaged those pipelines, there is a high probability that the USA would benefit from huge export increases to Europe and Central Asia and help develop new oil and gas production in that region creating permanent competition with Russia.

What is the highest danger of a war of West vs Russia? The danger is of a domino effect that causes a broader and larger long term global conflict that ultimately could tempt China on the east, as well as smaller nations on the south and west to move into Russian territory.   Remember World War 1 and World War 2?

Other impacts of a Russian invasion and potential war with the USA and other nations:

* More smaller nations would join in NATO like alliances

* Huge loans to smaller nations by the World Bank, IMF, and China

* Economic disruption, huge losses of life, and economic set backs of some nations for decades

* Increase in influence and power of China in the region

* Increase of respect and power of the USA world wide

* Increases in food and commodity prices

* Manufacturing and industrial build up of military industries

* Substantial damage to infrastructure of Russia

GLOBAL PERSPECTIVE PREDICTION OF WHAT A WORLD WAR 3 CONFLICT COULD EVOLVE INTO:

An American war with Russia would bring together strange bedfellows, and it is conceivable that America, China, Japan, Romania, Germany, Austria, Italy, France, England, Finland, Sweden, Australia, Mongolia, Kyrgyzstan, Kazakhstan, Uzbekistan, Turkmenistan, Iraq, Turkey, India, Pakistan and even a long shot of Iran, would join together against Russia.  The ultimate result would be a punished and battered Russia, setting the nation back 50 years.   Iran is a wild card and could go either way, but we believe the odds would be that Iran would see more advantages with an alliance against Russia, than exposing itself to attack from its neighbors, Iraq, Pakistan, Turkey, India and other western nations.  Iran would be vulnerable to mass destruction, and likely would see benefits in joining the West in such a war. In this war, smaller nations such as Israel, Egypt, Jordan, Syria would almost be irrelevant, except for natural resources or oil sources they could provide.   We must say, the chances of conflict extending to this level would be costly in lives and money and a long term conflict that would strain economies of the world and create instability for some nations. Nations involved would press hard to achieve some compensation of war costs, by seizing Russian treasure and resources, in return for their involvement.  The grand winner of such a conflict, in our opinion, could be greater influence of China and India in the region with some increase of American influence and economic growth world wide.

Our advice to Putin and Obama.  Consider the risks.  Both of you are playing with fire, that could be very costly to Russia and the USA. Russia can certainly win “little wars” against helpless nations who have struggled to break away from the paw of the Russian bear. But eventually, a larger and extended long term conflict Russia could realistically result from continued aggression and expansion and Russia could be blasted back to a poverty ridden devastated nation as it was 70 years ago, losing much of its autonomy and certainly seeing regime change and probably an end to communist rule.  We will see if Putin’s ego and ambition will allow him to see the long term impacts of playing with the fire of conflict. Risk to America is of financial and increased debt, as well as some risk of Russian attacks against the American mainland. We do not believe those risks have a high probability of crippling the United States, due to superior defense systems and technology.

The American people have no conflict with the Russian people. But the American people do feel some sympathy for the people of Ukraine and resist the "bear" from becoming a "Hitler like" aggressor again. As usual it is the politicians and “big boys” who get us into these things. But is the rank and file people who pay the price for these conflicts.

So to the leaders of Russia and the USA, we suggest that you both stop playing tit for tat.  Putin, pull your tanks and soldiers back. Live in peace and forget your dreams of a new, bigger, badder Russia.  Obama, be bigger and better, exercising wisdom.  The USA already has the power and the moral high ground. We know, President Obama, that Putin can win the short term but you, Mr. President, know he will lose in the long term…so both of you, cool it.