This Generation Not Bound by Institutions of Church, Marriage or Politics 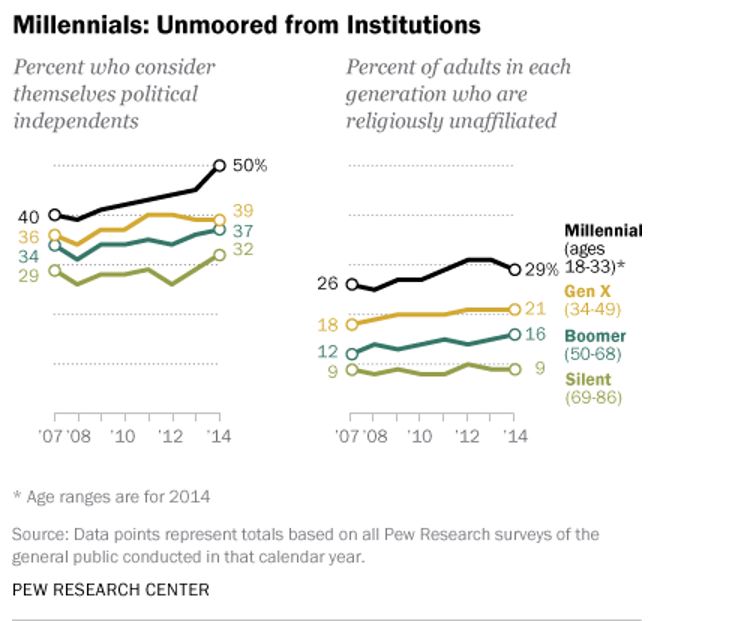 We give credit to Jessee Holland of the Associated Press for the work and writing on the subject and include much of a recent article. We commend them for printing and researching the subject as it is a subject that we at  Boothe Global Perspectives have  followed with interest for years. This has huge implications for business and society in the USA and Europe.  Over the years we have noticed the trends. American youth are not tied to institutions, not joiners like their parents. Kiwanis, Rotary as well as Churches of all kinds, are reporting that their youth, when they become adults simply are not participating.

A recent study of churches in the USA, indicated that less than 15% of the children of church members join or stay with the churches of their parents. Or restated, 85% of Christian youth do not join or affiliate with the church denomination of their parents in the USA.  Most say they are “spiritual” but not institutional or denominational. That spells trouble for institutional church organizations which have an average age of over 60. Consider this, as a businessman, would you invest in a business that is showing attrition of 7% per year due to aging, illness or death of members, and a limited future of new youth to replace the older generation coming up?  Thus institution Christianity in the USA is in trouble and this is consistent with predictions of the book “Flowers Facing the Sun” published by Ben Boothe over 15 years ago. This has implications for hundreds of institutions, including civic, religious, charitable, and service organizations. We are seeing a plethora of institutional buildings, orphanages, schools, churches, offices, lodges, going vacant across the USA because their parent organizations have declined.  This trend will continue increasingly in future decades.

Marriage is also declining.  Interesting that the gay population is fighting for the opportunity to marry, while our main stream is delaying marriage, getting married at much older ages. Now a growing percentage of American youth are not getting married at all. Some believe this disrespectful, putting the wife, at a particular disadvantage, since women in our culture tend to have lower earning power but it seems that the younger generation disagrees.

The marriage (or lack of) can make it harder to qualify for loans or mortgages for some couples and also create legal and tax issues because it has huge social and cultural implications.  Appraisers suggest that there can be value impacts to a business property depending upon the combined income of a married couple, "If they aren't married, additional legal and loan guarantees are required. "If a property cannot assure solid financial backing or cash flow it might impact the financial structure of a property or business" says one appraiser.

This creates some social confusion among social engineers, because ordered society needs to know “Who belongs to who” for a myriad of reasons, with legal, custodial and tax implications.

Political parties are different. We see some candidates inspire youth. John F. Kennedy, Eugene McCarthy, George McGovern, Al Gore and Bill Clinton ignited strong support from young people, as did the “Occupy America” movement, but this rarely resulted in long term organized Party Affiliations, or tangible institutional follow up.  American youth appreciate the idealism of the Democrat Party, but then do not follow through with memberships, financial support or institutional substance.  Young Conservatives and youth Republican clubs are in smaller numbers, but seem to “sign up” with the party a little more than young Democrats.

THE FUTURE, WHAT WE SEE:

Comments from: Ben Boothe, Publisher, Boothe Global Perspectives. Check out the article below and we would appreciate your thoughts an input as to what you believe this new world, our new future will look like. Write:  ben@benboothe.com

WASHINGTON — Young adults like to think of themselves as independent, but when it comes to politics, they’re more likely than not to lean to the left.

Half of American adults ages 18 to 33 are self-described political independents, according to a survey out Friday, but at the same time half of these so-called millennials are Democrats or lean toward the Democratic Party, the highest share for any age group over the last decade.

In addition, young adults tend to be single and churchless — turning away from their predecessors’ proclivity for religion and marriage, according the Pew Research Center survey. Almost two-thirds don’t classify themselves as “a religious person.” And when it comes to tying the knot: Only about 1 in 4 millennials is married. Almost half of baby boomers were married at that age. The new survey shows how the millennial adults are “forging a distinctive path into adulthood,” said Paul Taylor, Pew’s executive vice president and co-author of the report.

This can especially be seen when it comes to politics. Fifty percent of the millennials identify themselves as political independents, while only 27 percent said Democrat and 17 percent said Republican. The independent identification for millennials is an increase from 38 percent back in 2004.

“It’s not that they don’t have strong political opinions, they do,” Taylor said. “It’s simply that they choose not to identify themselves with either political party.”

When the self-identified Democratic millennials combined with the self-described independents who lean Democratic, half — 50 percent — of the millennials are Democrats or Democratic-leaning while 34 percent are Republicans or Republican-leaning.

Taylor said they don’t know whether millennial voting trends will stay the same as they get older.

“People can change over the course of their lifetimes,” Taylor said. “At the same time, the behaviors, attitudes, the voting patterns and experiences that generations sort of encounter as they come of age in their late teens and early 20s are important and this generation as political actors has come in three or four national elections in a row now as distinctively Democratic and liberal despite the fact they don’t want to identify that way.”

Millennials also haven’t bought into the idea that they should go to church or get married early.

The 64 percent of the millennials who say that they are not religious “is the highest for any age group we’ve ever measured,” Taylor said.

The Pew study was based on interviews with 1,821 adults by cellphone or landline from Feb. 14-23. The poll has a margin of error of plus or minus 2.6 percentage points.