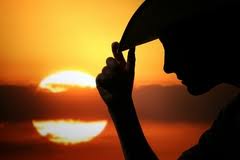 I was in west Texas, in a town organized by my great grandparents, for a funeral of a relative.  Uncle Benny, in his eighties now, a rancher/farmer, saw me and my wife.  When she came near to meet him, he removed his old black cattleman's hat, bowed slightly and put out his hand, as he said: "Nice to meet you mam."  His eyes never left hers as she glowed with delight. It was charming, elegant and she was simply astonished at what a respectful and beautiful gesture it was. She told me that if he had been 50 years younger, she would have surely have been tempted by a man who knew how to charm and respect a woman with such a simple gesture.  Sometimes a "hat" can win a woman, and strangely, 70% of our population today doesn't have a hat to "doff". Neither do they know how to wear one with style and in good taste.  The old ranchers and cowboys knew how powerful a symbol and tool that a hat was.  They believed, rightly, that a hat told of pride, social status, character and intent.

Seeing how lovely such a gesture could be, I looked around at the funeral and 60% or 70% were wearing western large brimmed hats. But these were not city "wanna be's" these were real cattlemen and real farmers born of the land. Even though I come from west Texas, most of my life has been in the business world of Wall Street, and in banks and board rooms all over the country.  I determined that it was time to learn hat etiquette, how to wear one, where to wear a hat, and when to "Doff and Don" at hat. Let me tell you, wearing a good hat, in the proper way, with a look that matches your head and your attitude, is a fun, and powerful thing.

With millions of young people wearing the fedora's and many more out west trying to be 'cowboys' perhaps it is time to learn how to do it properly and with style.  To "Don" (put on) a hat, or "Doff" (take off) a hat is simple. To do it with style is something else. 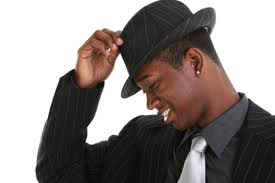 A FEW POINTERS FOR WEARING A HAT:

To all of you who appreciate and value traditions and subtilty of appearance, "My hat is off to you!"