Millions of Americans Suffered Power Outages. Isn't it time for Local Renewable Energy Off the Grid?

During the frigid blasts of Artic air, which froze 50% of the USA and impacted 160,000,000 to 180,000,000 people, there was a huge demand for electric power. Extreme weather events damage and threaten the electric "grid" system causing disruption and even danger to citizens.  Perhaps it is time to consider local, independent renewable energy, to reduce "energy risk" or "grid failure".

Indeed the combined factors of snow and wind blowing down electric lines combined with the huge demand, resulted in millions of Americans without electricity, some for short periods, but some for several days. See below a typical 'outage' map. 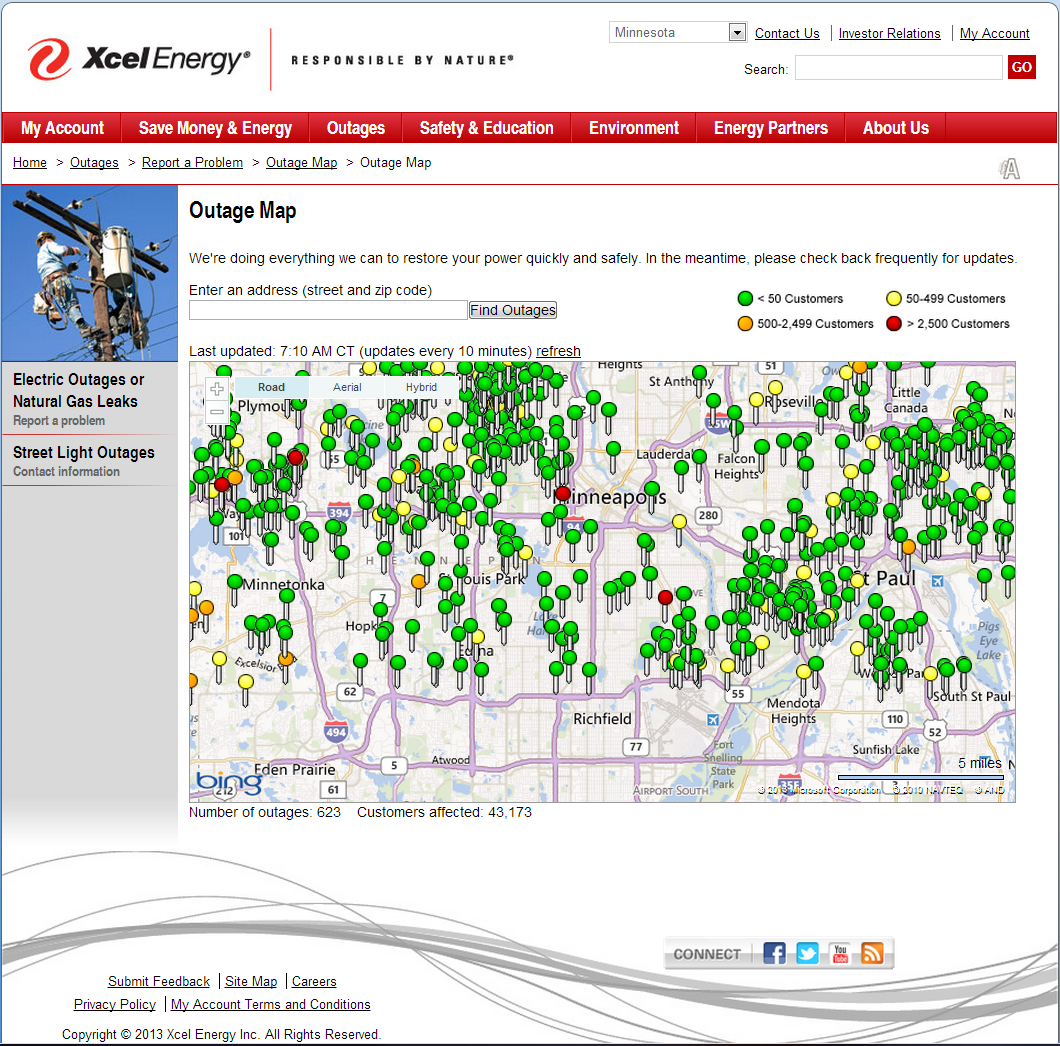 In Michigan, there were lengthy power outages stemming from an ice storm that knocked out service to 660,000 customers statewide, the vast majority served by large utilities Consumers Energy and DTE Energy.

"We're doing a probe because of the magnitude of the number of customers that were out and for that length of time," PSC Chairman John Quackenbush told reporters.

In New Jersey, Illinois, Indiana, Kentucky, Maryland, Michigan, North Carolina, Ohio, Pennsylvania, Tennessee, Virginia, West Virginia and DC. Electric use reached a cold-weather peak on Tuesday in New Jersey and the rest of the PJM electric grid, the system strained to serve 61 million people in 13 states and the District of Columbia.

With temperatures not getting out of the single digits in much of the nation for several consecutive days heaters and furnaces were going full-blast all day, all night every day for a week or more. PJM broke the record for peak winter electricity use from the previous peak of 136,675 megawatts in 2007. (One megawatt is enough to provide power for about 200 to 500 homes.) Electricity use reached 141,312 MW in early 2014.

The request sent to all consumers to reduce electricity use applied to the entire region served by PJM, which also is all or parts of Delaware and Kentucky.

According to PJM President and CEO Terry Boston, “Consumers’ conservation had a direct impact on our ability to meet everyone’s electricity needs and helped us manage a very tight power supply caused by the extreme cold across all 13 states.”

“Conditions were challenging for the grid due to the extreme cold in the past two days, a number of generating plant outages as well as increased demand for electricity to meet consumers’ heating needs,” he said. “The generating plant outages were mostly related to the weather. Outages due to natural gas curtailments were a relatively small percentage of the total outages.” Gas is used to power some electric generating plants. You will recall that a few years ago much of New Mexico was without electricity because gas lines in Texas were cut off to the generators that served New Mexico, and diverted to energy needs of Texas (2011).

PJM, includes 62,556 miles of transmission lines; With this many miles of electric lines it warned that voltage reductions might be necessary because of the expected high demand. There were many “outages” throughout the system.

“The system is big, diverse and robust,” said Michael Lynch, president of Strategic Energy and Economic Research, a consultancy based in Amherst, Mass. “Some of the utilities have to buy some coal power and small amounts of gas at high prices, but a lot of adjustments across the system are enough to cope.”  But then Lynch got to the heart of the issue, by saying that prices for electricity would be going up.  Supply and demand, suggests that supply was limited and demand, in some cases outpaced supply.

Power companies often by on the 'spot' market, and during this cold snap prices went up 4 to 10 times, increasing the cost to power companies, who then resell the power back to consumers.  On the wholesale market, a megawatt-hour of electricity (energy that would run a big suburban house for a month) which on normal days sells for $40 or $50 in many locations, was going for $500 to $1,000 in New Jersey, Delaware and big areas of Pennsylvania and Maryland.  New England, the prices were over $200. In New York City, wholesale prices were under $200, mostly because generators were burning oil, whose price does not spike seasonally as much as the price of natural gas does.

Further south Texas suffered as well. Power companies also strained to meet power demand even though Texas has advertised that it has huge natural gas and coal production. The problem was simply delivery and demand. The state’s main power grid narrowly avoided outages on after several power plants failed as electricity demand soared in response to the coldest weather in two years. Wind and cars sliding just before Christmas damaged power lines and then severe cold Jan 3-7 further stressed the system.  This reflects a systematic problem that Global Perspectives is seeing nationally... a grid that is old and is pressed to meet demand during extreme weather events. Homeland Security has indicated that energy systems, power delivery and food transportation delivery may be the weakest links in Homeland Security.  When a cold weather event can put this much strain on a system, consider what would happen if there were natural or man made events that destroyed generation plants or power lines? So far we, as a nation have been lucky, but we must continue to diversify our energy sources and options, and this entails decentralization of the system. The genius of the internet, is that it is a diversified and non centralized system, so that any single source, if destroyed does not destroy the entire system. The power grid concept must be expanded to allow for other forms of power, particularly during crisis periods such as we just experienced.

The Electric Reliability Council of Texas, which manages the power grid that serves most of Texas, briefly issued an Energy Emergency Alert 2, the last step before rotating power outages would be implemented. ERCOT canceled the warning about possible outages a few hours later, but in the meantime power had to be purchased from old Mexico to buttress up the system in Texas. 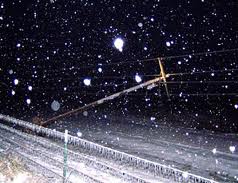 But the loss of just one more large power plant could have pushed the grid over the edge, Dan Woodfin, ERCOT director of system operations, told reporters during a conference call. The grid lost two big power plants to weather-related problems and some others to other problems, totaling about 3,700 megawatts of power, Woodfin said.

As the Arctic air settled in across North Texas temperatures plunged into the teens and wind chills dropped to the single digits.

A typical electrical grid distributes electricity over long distances, and the longer the distance the more energy is “line loss”, to the point that coal produced electricity, looses over 30% of the power that is actually produced, by the time it gets to consumers. Also the longer the lines, the more exposure the lines have to risk of damage, from weather, accidents or vandalism. Terrorism would be the worst scenario, because these lines are often in remote and unprotected areas.

Now when a 3 to 10 day cold snap can strain much of the national grid, we must ask this question. WOULDN’T WE BE SAFER, AND MORE EFFICIENT WITH LOCALLY PRODUCED ELECTRICITY, DIVERSIFIED THAT DOES NOT HAVE TO TRAVEL SO FAR AND SUFFER GREATER RISKS OF LOSS AND INTERRUPTION? 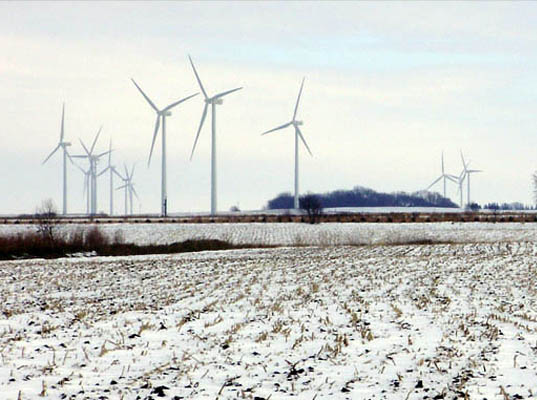 Consider, a $700,000 Wind Turbine, made in Holland, can produce enough electricity for 600 homes. A $3,000,000 wind turbine, made in the USA can produce enough electricity for 2,500 homes.  These units don't have huge "line loss" because they can be in your town.  They can pay for themselves in just a few years. Cold weather doesn't bother them at all. (Check the automatic energy calculator on the site www.wind-inc.com to get an idea of potential production of wind turbines).

If local counties and towns scattered these across their communities, it would make a huge “safety net” of inexpensive electricity to these emergency situations. Typically wind power is cleaner and cheaper than electricity made with coal or natural gas.

The millions of people who have been without electricity because of extreme weather events, realize now how helpless they are when we rely solely upon the grid.

Of course solar power is wonderful in the South and West, but in cold and cloudy climates, wind blows even when it is snowing. I have often thought of the people of Mongolia, who in their capital city of Ulaanbaatar, are all powered by one coal powered plant. When the “dragon” as they call it, goes down, no one in town gets a hot bath or shower for a few days. That is, no one, except the few smart ones who have their own solar or wind power hooked to their buildings.  Or remember the people of Japan, when the tidal wave knocked out their nuclear plant. They were totally helpless, and since the Japanese have installed thousands of solar panels. They figured out the hard way, that locally produced power, renewable energy from the sun and wind, is a lot safer and better than the giant ‘grid’ central systems.

We must all remember that this entire system, which was imagined by Thomas Edison and financed by J.P. Morgan, stood against the concept of Tesla, who said that people could be independent of central power "costly grid" systems, and “need never pay for electricity” if proper technology was adopted. J.P. Morgan said: “If we can’t put an electric meter on it, what motive is there!” and he vetoed Tesla’s ideas, in favor of the grid concept that most of the world is chained to these days. We are fortunate that the power companies are as efficient as they are, but as our world population grows, we will see the day when distributed renewable energy that is disbursed will be ever more an popular. Why? Because our grid system is already near it’s capacity, and we will need power from every source to power America in the next decades.  I predict that one day, most homes and hotels, universities, restaurants, office buildings and even prisons, will produce most of the power that they need. We are already seeing "net zero" buildings, and economics are helping. Commercial office buildings powered by renewable energy, have been documented as having longer term and more stable tenants, higher rents and higher appraised values. It is coming my friends. Don't let this train leave you behind. The great "natural gas fracking bonanza" which we thought would give us more energy than we could possibly need with predictions of the average gas well providing 20 years of good production.  We now see that the average "fracked well" life now a mere 5 years.  Our energy needs will be coming upon us before we know it, with higher energy prices and if we are not careful we as a nation will be desperately dependent upon other nations that do not share our values.  "This train don't carry no gamblers" Jimmy Durante sang 40 years ago.  But the new renewable energy train, will carry the energy leaders of the future. Get on board early and prepare for a long and productive ride.

For further information on renewable energy, go to the home page of Boothe Global Perspectives  and you will find over 160 articles.  Simply type "renewable energy"  "solar energy" or "wind power" in the search box at the upper right of the home page.