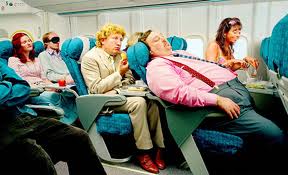 Like many business people, I have to fly a lot.  Rude flyers, bad flyers or rude passengers really bug me. In a given week, I might be in California, New Mexico, Arizona, Arkansas, Indiana, and Texas for my clients.  Those who fly a lot, easily identify those who don't fly often.

A worse category are those "frequent flyers" who are terrible passengers even when they do fly a lot.  Such as the old fellow who stopped in First Class and refused to move into his seat, because he preferred to stand in the aisle.  He just didn't want to sit down. He was blocking entry into the airplane to a large group,  while he stood in the aisle adjusting his tie.  I watched a woman physically almost pick the rude passenger up and move him into his seat, while the 25 or so waiting to get into our seats gave quiet cheers.

Well, here are 13 of my pet peeves and I hope you will send me more by email from one of our company sites on the Global Perspectives Home Page.

1. People who walk down the airplane aisle with purses, bags and multiple items that hit, bump or fly into the head, shoulders and face of sitting passengers. I have been hit by baby beds,  architect easels, backpacks, brief cases, computers, guitars, giant purses and kicked in the head by babies hanging onto their Mother's backs.  What gives with these people?  They are alike the people who stand in the middle of the aisle blocking everyone, refusing to give way while they manipulate their luggage, kids, or computers. Then after you have packed the luggage and folded your suit coat, closed the overhead, there are the ruthless ones who decide to cram into your overhead, move your luggage, smash your clothes or hat and cram their boxes into your fragile camera and computer bags.  When they smash their luggage atop my clean and pressed business suit that I must wear for meetings, I get irritated.

2. I hate the arrogant guy who stands up in his place and yells and talks to all of his friends and will not sit down. These people want to be seen and want everyone to hear them. He blocks the view of everyone else, blocks the aisle for others who need to go to the bathroom and inserts his personality into everyone's mind.  On international flights I have seen some stand up like this, loudly entertaining whoever will watch,  for hours. Every long flight seems to have a loud clown like this.

3.  Irksome are the loud passengers who do not stop talking for an entire flight and others within hearing range in front and behind them have to endure their self centered conversations. More about these later.

4. The ones who sit down and immediately lower their seat backs to sleeping mode like the fellow in the photo above. They never look back or politely ask permission and end up putting their heads within 6 inches of the lap of the poor person behind them and take away his ability to use his tray for food, reading or computer use. I am a large, tall person and it really crowds me when a seat comes lumbering down into my lap.  Observe the "reclining" passenger, they seem to never be "normal".  I have seen black men dance and sing in their chairs, white men snore and strange women mumble and talk outloud.   I have resorted to tapping them on the shoulder and asking them to move their seats back up with something like "I have bad knees and you are cramping me".  These pinheads are some of the worst, they simply seem not to realize (or care) how they imact others. When I want to "recline" in an airplane, I always look back and say: "Will it bother you if I take my seat back?"  and try to not go all the way back, if I do recline. If there is a mother with a baby behind me,  I don't recline, just to help her out.

5. Are you alergic or sensitive to smells? Those who spray perfume, hair spray or do personal grooming in the airplane seat bother me. I was beside a man who took out an electric razor and shaved and trimmed his hair beside me.  Then he slapped "aftershave" on his face.  I didn't want the noise, smell or his whiskers in my face.

6. The ones who let their children (or grown ups) be loud, out of hand, or rowdy. One lady changed a diaper in the seat across from me. Ugh!  Another fed her little dog who was in a bag between her feet and the dog started whining and asking for more food during the flight. 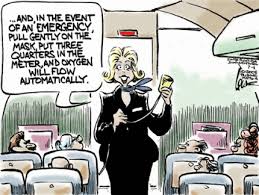 7. Flight attendants who talk to much on the intercom...some just need attention, or perhaps they think they are potential movie stars,  but how obnoxious.  When the intercom is set loud and repeated mindless chatter interrupts you, one must wonder, if they have brains between their ears.  This is especially negative when they start describing all the charges and fees they have for leg room, drinks, food, email and ad infinitum.

8. The passengers who jump up and run over everyone in the aisle,  the moment the plane stops, instead of allowing each seat row to get up and out in order, these people are dangerous. I hate the pushers who start breathing down your neck the moment the plane stops rolling. To those crowders I often look them in the eye and say: "Are you in a hurry? Do you have an emergency? If not, take a deep breath and relax." That normally calms them down, although occasionally one says "I may miss a flight" and those I give them a pass with a "Good luck".

9. The Romeo's and Juliet's who talk loud and flirt overtly, often sharing their personal love and sex lives with all within hearing. I often see guys or girls "trolling for love" on planes. Worse is the typical divorced women travelers who wish to vent their personal lives and baggage of lost loves to each other for all within range to hear.  Perhaps equally ugly are the old men who want to discuss their cancer operations or their last hospital proceedure, they  can be tedious. The pampered women who talk about their nose jobs, breast jobs or tummy tucks and laugh about how much it has cost their husbands. The Red Neck man who wants to talk politics or religion can be most irritating. One really obnoxious man near me on a recent flight stood in the aisle wearing a shirt and hat saying "I am a member of the Purple Heart Club" and loudly told everyone that he got shot in a war. I wanted to tell him that I admired those more who didn't need to brag about "getting shot" to strangers in a plane. I knew where he was shot because I was listening to a wounded  ass. (Off the record,  I much more admire the soldiers who get metals for doing some brave deed instead of getting shot by the other side,  but we shouldn't say that should we?)

10. The cell phone talker who speaks loudly but has nothing to say. Airports and airplanes are full of those. I listened as one man sitting beside me on the plane, spoke into his phone loudly for all of us to hear,  "Sweetheart I can't wait to be with you tonight! Get ready!" But then everyone within 3 rows around him quietly chuckled when he said "Why? We can't tonight?"    I say, let the telephone crowd text. Some talk loudly for attention and want to be heard by all,  while others are just rude. Let them text or email. When I get a loud talker I pick up my phone and talk loud and sing , hum or say: "I am speaking loud because there is a loud guy beside me and I am trying to overcome his loudness so that I can concentrate"...sometimes they get the point.

11. The person sitting beside you who is chatty, too friendly and will not leave you alone. I often wonder what they are trying to sell, insurance, religion, politics, or themselves?  Headphones and a book often provide escape. 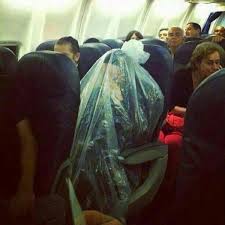 12. The cougher and sneezers. Sometimes I offer them a Kleenex and say: "Perhaps this will help you cover your mouth."  Some have suggested putting sick flying passengers in a plastic bag.  And speaking of plastic bags the next category of people would also be appropriate for that.

13. Those guys from France, Germany, or India who I have noticed, because of their  cultural habit, have abnormal body odor. One man from India had such a smell of garlic, curry, turmeric, and other Indian spices  so strong I could smell him several feet away.  And the scent lingered after he had gone.  A German fellow in a suit walked into the plane and must not have used deodorant in days, tempting me to hand him a bottle of "Right Guard".   Almost as bad are the Frenchmen with a smell of stale wine, old cheese and who knows what else?  I would almost prefer the dirty diaper baby next to me than the adult "stinkers who are too rude or too ignorant to clean up" and too thoughtless to respect the rest of us on the plane.

They too deserve a plastic bag, along with Right Guard and breath mints.

Well there you have it.  13 bad travellers.  Travel well and help educate the public on how to make travel a respectful, polite and cordial experience.