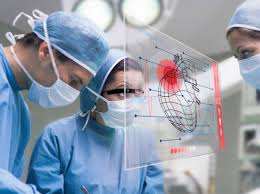 We saw this article by NPR and commend Lisa Chow for writing it.  It is very relevent to hospitals and patients and offers a positive impact that the new law provides. We appreciate this insightful reporting by Ms.Chow and NPR.  Essentially under the new system instead of compensating doctors and hospitals for unnecessary tests and procedures, the new law encourages that procedures be done better and right the first time, and follow up be provided to assure patient health.  The research indicates that this will save $Billions of Dollars.

Other studies show that health care costs in the USA which had been growing a alarming rates, have already declined significantly due to the new law. Partially because of reductions in "over billing" and partially because of greater efficiencies in the system.  It is working, despite what politicians who oppose it say. It has been almost unnoticed in the political dialogue, but as hoped, the new law has already had huge impacts on what was a growth in medical costs out of control.

The Affordable Care Act is transforming more than health insurance. In hospitals around the country, the legislation could transform the way doctors and nurses actually care for patients.

Part of the law is designed to rein in the nation's exploding health care costs by creating hundreds of little experiments that test new ways for hospitals to save money.

One example: At Summa Akron City Hospital in Akron, Ohio, doctors are preparing for a new way of doing business. Michael Firstenberg, a heart surgeon at the hospital, says there's something a little funny about the way he gets paid. If a patient

comes in for a bypass operation, Firstenberg earns a certain amount of money for the hospital.

"However, if that patient that night has to go back for bleeding, then I get paid for that procedure as well," he says. "And everybody's happy because look at all the revenue I'm generating, independent of the quality."

As a result, everything is more expensive. The key question for health care reformers trying to rein in costs is how to create a less expensive system that still provides good care.

Starting on Jan. 1, the federal government, the hospital and some of the doctors there will try a new approach.

Rather than paying for that bypass operation and then paying again for bleeding, Medicare will pay one lump sum upfront to cover the surgery and any complications that occur after surgery.

One payment for one operation, plus follow-up; that's it. If the patient doesn't have problems within 30 days of being discharged from the hospital, the doctors could make even more money than they do today.

But if there are lots of problems after surgery, they could lose money. This shift in how medical providers get paid is changing how things are done at Summa Akron City Hospital in three important ways.

Surgeons and nurses at the hospital now carry around a sheet of paper listing every simple step they're supposed to perform.

Did the patient get her antibiotics on time? Check.

Did the catheter come out on time? Check.

Research has long shown that documenting simple steps can significantly reduce medical error. Yet hospitals have a hard time implementing checklists, because doctors don't really like them.

"When we came up with this, I kind of felt a little silly for the first few weeks following a sort of checklist or menu," surgeon Eric Espinal says.

But, he concedes, pilots and NASCAR drivers use checklists because they reduce complications. So checklists could be better for patients — and, in the new system, the hospital's bottom line.

Traditionally, Medicare paid hospitals separately from doctors. But in the experiment at the Akron hospital, Medicare will pay the entire team together, so everyone will share in the savings or costs of each surgery.

It's meant to foster a culture of collaboration. Berkovitz, the cardiologist, says this change hasn't been easy. "Physicians are a dedicated, strong-willed independent lot, and many of them went into the practice of medicine because traditionally

you've been able to be the captain of your ship, and that's not always equated to good care," he says.

3. Helping Patients After They Go Home

Before the ACA, doctors didn't have a financial incentive to prevent patients from being readmitted to the hospital.

Now, once doctors discharge someone, it's in their financial interest to make sure their patients stay healthy even when they're at home. In some cases, that means sending nurses from the hospital to check up on patients once they've gone home.

(note from BBB. Consider this. The new law may bring the concept of home visits back to reality in the USA.  Some of you will recall, as I do, our family doctor dropping by our house to check on a sick family member, or to give an injection.  In my book, that is significant.)