Veteran's Day. One Flag for a Private First Class 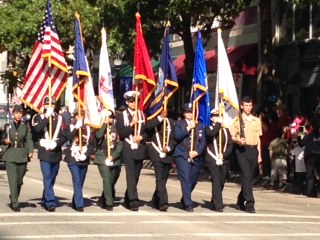 I thought of my father taking me to one, and then to Arlington Cemetery in DC when I was a child. I thought, “Today I will honor my dad” and I went to the parade.

Afterward I went to the beautiful cemetery and found his grave, and the simple stone there.

PFC (Private First Class), US Marine Corps. It seemed much to simple, small even. It did not tell of his rescue of trapped men behind the lines at Iwo Jima, or his Purple Heart and Bronze Star, or the commendations he got from his commanding officers. It didn’t tell of his demanding to go back to the front lines when he was in a hospital recovering from being shot, and how he left Hawaii, “To fight beside my buddies” when he had a free ticket home.   The grave stone didn’t tell of his establishing several businesses, and becoming a respected community leader a member of the school board, a leading business man, a churchman, a good father and husband, a millionaire. It didn’t tell of his sending two kids to college, or supporting his church, or building a home near Fort Worth Christian School so his son, me, could go to a private school. It was odd that he was on a school board of a big school system, and because of that always wanted me to go to a private school.

A fellow drove by in a pick up and put a flag on a grave and saluted. I asked him if he could spare a flag for a Marine and he obliged. He said: “I was Army, but guess, I can spare a flag for a Marine. I have been doing this for 20 years”.  He didn't know that my father, a scared young man, went out beyond the lines of the Marines and battled overwhelming numbers of Japanese soldiers and then carried and pressed right through an "enemy camp" firing and shooting his way through, to save his fellow soldiers.  He didn't know my father had fought to remove the "enemy" from tunnels, mountain caves and had charged them in an open running attack.  He didn't know that my father, as afraid as he was, fought as if he was fearless beside his buddies. My father told me later, that he did it because he was certain he was fighting for his nation and so that I could have a future of freedom and peace.  That was my Dad.  But still it seemed a bit eccentric that a guy would bring a pick up, with flags, and plant them and salute in a graveyard.  I thought that it must be a deeply personal thing for him.

“Interesting gesture”, I thought, putting flags on the graves of veterans. 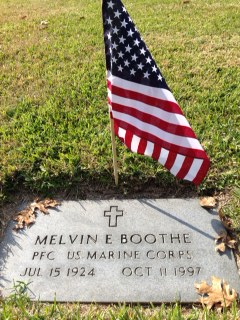 Then I planted the American flag at my father's grave.  Odd, it seemed almost like he was there, like he was smiling about this.  I did not salute to my Dad, but simply whispered a prayer with my knees on the grass. I am certain that he would have understood, perhaps he if a spirit did understand.  No, deeper, I felt a sense that he was aware of my presence and glad for this time together. How is it that we can feel this way about people long since dead? I often believe that with death we become reunited with the universe and our spirit lives on, in the universe, in our memories, in us in tangible ways.  Every person who has touched our lives, is alive within us.  Yes, no doubt, it is true.

My father took my life, “by the hand” and groomed me for the first third of my life. He often said things such as: “I am teaching you this so you will not have to do like I did, or be like I was.”   Looking back, I can think of him teaching me. He was constantly insisting that I not settle disputes with fights “Use logic and respect instead, don’t be like me” he said.  He would take me to the forests and teach me to respect nature and leave it pristine.  He would take me to churches and teach me that different people could have different opinions and still be marvelous people.    This teaching was much about respect. Respect for nature, for others, for diversity.  Oh don't get me wrong, he had strong opinions, some of which seemed outrageous.  But, he understood that they were "opinions" and that the differences were what made us unique and special.  As he became older, he spoke to me about his evolution to learn that some of his judgmental attitudes had been shallow and wrong.  The older he became, the more tender and sensitive he was about other people.

I can think of far worse things than being like Melvin Boothe, my father. He was a great man. "Just a Private First Class, U.S. Marine" and in his eyes, that was substantial.  Substantial enough that he would have fought and died for others.   Not bad.  At his funeral, there were many there, who I did not know, but who let me know that over a lifetime, that my father had helped them, encouraged them, been a loyal friend in ways that I would never fully understand.  Not bad indeed.

As I planted the flag, there was a feeling in the air, kindness, almost a feeling of friendship as if I were shaking hands and smiling with my Dad.   Getting up to leave, I realized why that guy had been putting flags by graves and saluting dead soldiers for 20 years. I got it. Because now a feeling of deep appreciation and respect for what my dad was, what he had been and what he still represents even now was strong.   I decided that I would be back here, more often, and with flags in hand. Flags to point out that a "great man" is resting  here, with many others who deserve our respect.

Here on this day, my dear Dad, still teaching me about life and death.