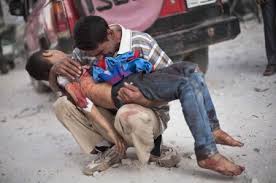 Polls report that a substantial majority of Americans do not wish to engage in war or military activity in Syria.

Let's look at this: 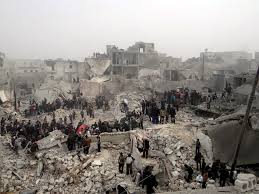 As heartbreaking as the stories of death and destruction are in Syria, perhaps the USA should "give peace a chance" on this while allowing investigations and the UN to function. Syria and it's close neighbors,  are most impacted, and most motivated to deal with this.

So, Russia may have created an alternative to save Obama from an embarrasing rejection by the American people and by our House and Senate.

But, this brings us to another question.  The vast majority, over 95% of the thousands who have been killed in Syria, have been killed by traditional weapons, not "gas" or "chemical weapons".   So, when all is said and done, the war may well continue. We urge the international community to use this pivital point in time, to move together, to place enough pressure on Assad and the rebels (both sides) to end this conflict.

Syrians are killing Syrians.  But many of the rebels, apparently, have come into the country from other nations and most of the weapons used in the war, by both the rebels and the government, have been provided by other nations.   How long does the killing go on? Does the international community, led by the United Nations, or led by major nations such as France, Germany, Russia, the USA and others have the will to step in and stop a war?  Obama has demonstrated that he was the will to at least do something. But the people of our nation and the world, at this time do not.

We are in a day when the USA, the American people,  do not have the motivation, or financial standing to be the world's policeman. Most businessmen, are simply trying to recover a bit from the worst recession in 40 years. Most families are simply pleased to have our kids who are soldiers, back home in the USA. We as a people prefer stability and peace, over a possible war that certainly could take yet even more of our treasure and blood. It is a sad day in the world, when we see killing day after day while no one with power and authority steps in to stop it.  Stop it, was what Obama a man of peace, has wanted to do.  But out of respect for the American people, and out of respect for other world leaders, he has reconsidered.  Now it would seem that we are in a situation where very little will be done, because the world community and the American Senate, Congress and people, do not have the will to stop the killing. Here is a sad situation. Killing and fighting continue on, and the world says: "It's none of our business" as we live our lives.  There is no easy or simple solution. Situations such as this require the wisdom of Job and the brilliance of Einstein. Where are they when we need them?