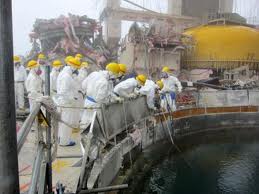 300 tons of toxic radioactive water have leaked from tanks on site at Fukushima nuclear plant. So now, they plan to freeze the ground to stop the migration into the water table and ocean. Radiation levels are now higher than they have been since the Tsunami in 2011. This illustrates how difficult dealing with nuclear plant disasters is, and how deadly and expensive their repair can be.

Environmental Solutions has dealt with nuclear dumps and stated: "Radioactive waste is the most expensive, most dangerous contamination to deal with. This site will be a problem for years, perhaps decades. We must ask how much cheaper, and safer wind or solar energy would be for the people of our world."

Radiation levels at Japan’s crippled nuclear power plant have jumped to a new toxic high. Tokyo Electric Power Company, reported that it’s Fukushima Daiichi nuclear plant, showed spiked radiation level of 2,200 millisieverts near the tanks on Tuesday, shortly after the government stepped into the effort to deal with the contaminated water crisis at the Fukushima plant. That level, is deadly and can kill an unprotected person within hours. But TEPCO, in a now typical company announcement, tried to lower concerns, by saying that the type of radiation is easy to shield against.

The government plans to spend $470 million on measures that include a plan to freeze the ground surrounding the plant's reactors to prevent the contamination of groundwater at the site.

TEPCO has accumulated a vast volume of tainted water in roughly 1,000 huge storage tanks at the site, some of them hastily assembled in the aftermath of the tsunami disaster.  The volume of radioactive water at the plant continues to grow because the company pumps water around the damaged reactors to keep them cool, and groundwater seeps in and becomes polluted as well.

Last month, TEPCO said one of the tanks at the site had leaked 300 tons of toxic water, prompting Japan's nuclear regulator to declare the situation a Level 3 serious incident, its most “dangerous” level since the reactor meltdown in 2011.

The nuclear watchdog, the Nuclear Regulation Authority, said this week that the recent high radiation readings may mean there are more leaks from other tanks.

In typical company language, TEPCO said Wednesday that it hadn't found any leaks from this tank and that the cause of the high radiation reading was under investigation.