We give credit to Men's Health for publishing this article, which we have quoted in part. We thought our readers would appreciate it.  BBB  Global Perspectives, other articles 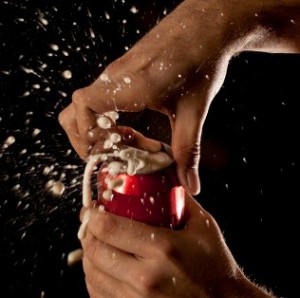 Show your heart a little love and skip the soda.

You already know soda is a big fat problem for your waistline. But new research finds that it’s not too sweet for your heart, either. Just one sugary drink a day increases a man’s risk of a heart attack by 20 percent, according to a study in the journal Circulation.

Harvard researchers analyzed 22 years of data gathered from almost 43,000 men. During that time period, 3,683 men suffered from heart attacks. The men who consumed the most sugary beverages—like soda, sports drinks, and energy drinks—were at a higher risk of having a heart attack compared to non-drinkers. This increase persisted even after the researchers accounted for other risk factors like smoking, family history of coronary heart disease, and physical inactivity.

“The sugar-sweetened beverages and coronary heart disease is probably due to the large amount of easily digested sugar in these drinks,” says study author Lawrence de Koning, Ph.D. These cause higher levels of inflammation and harmful lipids in the blood, which are both indicators of heart disease.

More from MensHealth.com: The Truth About Sugar

The more you consume, the more your risk increases. For each additional serving of sugary beverages per day, the associated risk of heart disease increased by 19 to 25 percent. And that’s a problem for Americans. According to the American Heart Association, sugar-sweetened drinks made up 3.9 percent of our daily calories in the late 1970s to 9.2 percent in 2001 in the United States.

Don’t ditch all sugar, though. Natural sugars found in foods like fruit and milk are fine, since these foods offer plenty of nutrition (plus, in the case of fruit, fiber to blunt blood sugar spikes).

“Sugar-sweetened beverages should be treated as a rare treat,” says de Konig. Having a sugary drink less often—such as twice weekly or twice monthly—didn’t increase the participants’ heart attack risk, researchers found. Diet versions weren’t linked to cardiovascular disease either. (But choosing no-calorie diet over the regular sugary soda might not be the smarter choice. Research shows that diet sodas drinkers have larger waistlines than non-drinkers.)