The 10 most oil-rich states

Ten states accounted for roughly 94% of all onshore U.S. reserves as of the end of 2011, with roughly a third of this in Texas alone — just over 7 billion barrels. In many of these states, the oil industry is a major part of their economies. Based on the U.S. Energy Information Administration's data on proved oil reserves by states, these are the most oil-rich states in the country. 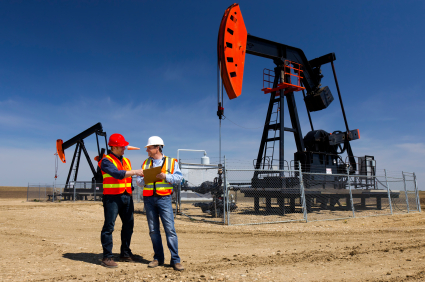 As might be expected, a high proportion of the jobs in these states is in the oil and gas industry, much higher than the national average of 0.5% of jobs. All but one of the most oil-rich states are in the top 15 for these types of jobs. In Wyoming, 8.5% of all jobs are in mining, quarrying, oil and gas extraction.

However, these are just the actual jobs in the industry. The increase in jobs and the influx of people to these areas are also creating many more jobs in other industries to support these workers. In six of these states oil and gas accounted for more than 10% of all jobs in 2011, according to PricewaterhouseCoopers. In Wyoming, it was more than 20%.

Workers in the oil and gas industry are very well paid. Nationally, the median pay in related occupations is $56,587 compared to a national median wage of $32,096. In the oil-rich states, the median pay in these positions is even higher. In Alaska, the median worker in the extraction industry earns more than $85,000.

These oil industry jobs and wages helped many of these states endure the recent recession relatively well even as the rest of the country went through severe unemployment. Because of the Bakken Shale boom in North Dakota, the state's unemployment rate was just 4% in October, 2009, when the national jobless rate was 10%. As of June, the unemployment rate in these states was below the national average rate in nine of the 10 states.

To identify the states with the most oil reserves, 24/7 Wall St. reviewed proved oil reserves data from the U.S. Energy Information Administration. Reserves figures are as of December 31, 2011, the most recent date for which there is available data. We also reviewed industry employment data from the U.S. Census Bureau as of 2011. We also referenced the industry's contributions to employment from PricewaterhouseCoopers' report, "The Economic Impacts of the Oil & Natural Gas Industry On The Economy In 2011." Operating refinery and daily refining capacity are as of January 1, 2013. Unemployment rates are from the Bureau of Labor Statistics, and are as of June.

Louisiana, which has the 10th-most proved oil reserves in the country, has 19 refineries with the capacity to process 3,273,020 barrels per day — second only to Texas in capacity. The largest of these refineries, Exxon Mobil Corp's Baton Rouge, processes about 503,000 barrels per day and is the fourth largest oil refinery in the United States. According to Exxonmobil, The refinery is the second-largest employer in the state. The outer continental shelf offshore of Louisiana produced 422.62 million barrels in 2011, far more than either Texas or California, the only other states with offshore wells.

While it has slightly more reserves than Louisiana, Colorado has much less capacity to process its oil resources. There are only two refineries in the state, and together they have the capacity to process about 103,000 barrels per day, which places Colorado 25th in the nation. Commerce City, the home of one of these refineries, boasts a fast-growing economy and increasing median incomes over the last 10 years. Of the state's workforce, roughly 6.7% of all jobs are the result of the oil and gas industry. Many of the reserves in Colorado can be found in the Denver-Julesburg basin, which has been producing oil and gas since the 1860's.

Crude oil production in Utah reached a total of 26.27 million barrels in 2011, or about 72,000 barrels a day. Capacity at the state's five refineries totaled 176,000 barrels a day, so the state is a net importer to its refineries. The imported crude comes primarily from Wyoming, Colorado, and Canada. The unemployment rate in December 2011 was just 6.1%, well below the U.S. average of 8.5%. Unemployment in June 2013 reported an improvement to 4.7%. In Utah, 15,553 Utah residents are employed in the mining, quarrying, and oil and gas extraction industries, representing 1.2% of the entire workforce.

Wyoming produced 150,000 barrels of oil a day in 2011. The state's refineries had the capacity to process 165,500 barrels a day. Wyoming's economy depends far more heavily on coal production, which accounted for 40% of all U.S. mined coal in 2011. The state also produced 9% of the nation's natural gas that year. Wyoming employs by far the greatest percentage of its workforce in energy extraction industries than other states on this list, and about nine times the national average. Wyoming is home to some of the largest oil and gas fields in the nation. The Pinedale and Jonah natural gas fields, for example, rank among the top 10 in the nation.

Crude oil production reached 195,000 barrels a day in New Mexico in 2011. The state's three refineries had throughput capacity of 142,900 barrels a day, but only two were operating and their total capacity was reduced to 126,600 barrels a day in 2013. The majority of the state's crude production comes from the southeast corner that overlaps the vast Permian Basin of West Texas. According to PricewaterhouseCoopers, just short of 10% of all jobs in New Mexico were either directly or indirectly generated by the oil and natural gas industries.

Oklahoma produced 210,000 barrels of oil a day in 2011, and the state's five operating refineries process more than twice that amount — 508,700 barrels a day. The state's major production regions have been along the Texas border, north of Dallas-Fort Worth, and further west through the Panhandle. A new shale oil play called the Mississippi Lime formation, along the Oklahoma-Kansas border, is expected to contribute even more new production in the next few years. About 16.8% of the state's jobs were generated by the energy extraction industry in 2011.

Recent developments in hydraulic-fracturing technology have given North Dakota access to the Bakken Field, an oil-rich shale rock formation in the western region of the state. According to the Energy Information Administration, the oil reserves in North Dakota increased by 46% in 2010. This spike is part of a recent energy boom and, as a result, states like North Dakota and Texas are seeing much greater demand for labor. North Dakota also reports the nation's lowest unemployment rate, which is only 3.1% as of June. Not only do there appear to be more jobs in states with plenty of oil, but news reports suggest that states like North Dakota also offer higher paying jobs. About 2.8% of North Dakota's workforce is employed in mining, quarrying, and oil and gas extraction, the sixth-highest proportion in the nation.

In 2013, economists from the University of Southern California conducted a study on the economic impacts of developing the state's oil resources. The study found that developing oil from the soon-to-be accessible Monterey shale oil deposits in the south central part of California could add more than 512,000 to 2.8 million jobs in the state. Even though the deposit is not currently available, its size (four times as large as the Bakken field in North Dakota) and the trends seen in other states, could mean California will soon surpass Texas in oil production. As of 2011, California is third, with about 3 billion barrels of oil reserves. A smaller percentage of Californians work in the energy extraction industries than the national average, and this is the only state on this list with an unemployment rate above the national average.

The nation's least-populated state contains the second-largest oil reserve, reported to be nearly 4 billion barrels in 2011. Like many other states, Alaska is preparing to benefit from technology granting access to natural gas reserves. The Alaska Department of Labor forecasts that 6,500 direct construction jobs and over 50,000 jobs in oil careers could be created if the natural gas pipeline project is allowed to continue. Roughly 11.9% of the state's workforce is employed directly or indirectly by the oil and gas extraction industry.

The quantity of Texas oil reserves and oil production dominates those in other states. According to the EIA, there were 32 new field discoveries between 2010 and 2011, more than double the fields discovered in North Dakota. Recent reports indicate these discoveries are not slowing down. In February, the Eagle Ford Shale Formation, which is composed of nine geographic fields underlying much of South Texas, produced 471,258 barrels of crude every day. This represents a 74% increase in oil production from the year before, according to the Texas Railroad Commission. As of 2011, the state's 27 oil refineries produce 4,754,681 barrels of oil per day.

24/7 Wall St. is a USA TODAY content partner offering financial news and commentary. Its content is produced independently of BoothGlobalPerspectives.com