Legal Battles Over Land Rights, Pipelines Are On The Rise 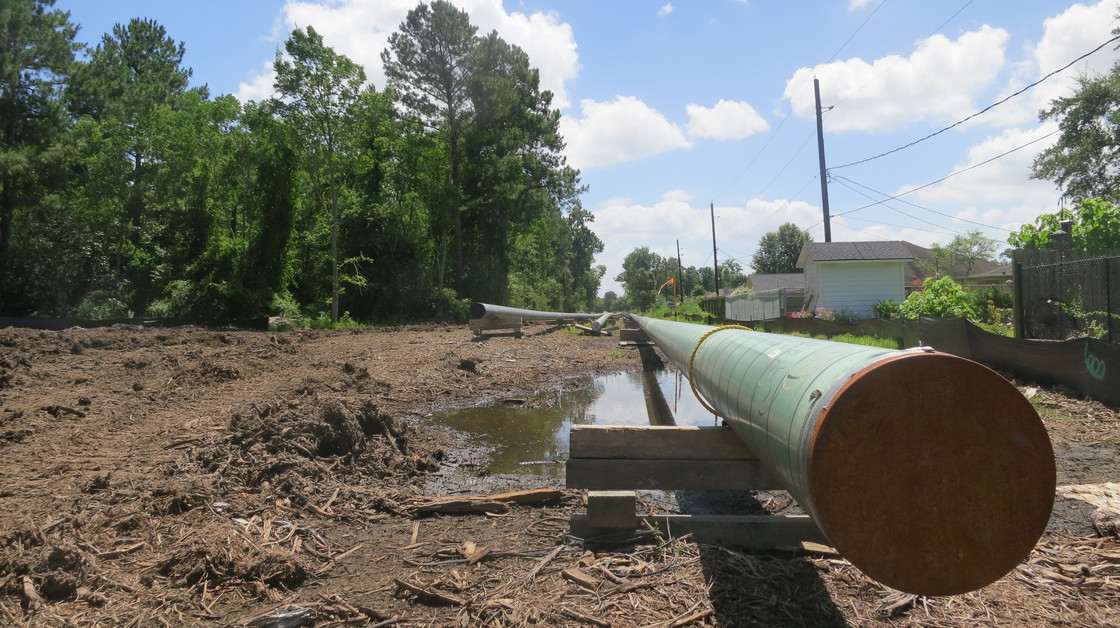 At Margaret O'Keefe's farm in East Texas, they grow high-quality Bermuda grass. The fields are flat and vibrant green, surrounded by woods of a darker, richer green. The family loves this land. O'Keefe inherited it from her mother, who divided it among eight children.

"She used to call it 'enchanted valley,' " O'Keefe says.

But her "enchanted valley" also lies in the path of the Crosstex NGL Pipeline.

That's a 130-mile underground pipeline to funnel natural gas liquids from Texas to processing plants in Louisiana. There, the component gasses like ethane and propane will be separated out and sold. The project is well underway. Crews are preparing to bore under her neighbor's field to bury the pipe underground.

Laying pipeline is a scene that's playing out all over the country. As the drilling method known as "fracking" unleashes vast amounts of fossil fuel, pipeline companies are scrambling to bring it to refineries. The industry estimates that the United States will need to add 2,000 miles of pipeline per year — and that's just natural gas. Oil will need its own infrastructure. That means there will be a lot of pipeline going through a lot of private land.

Usually the companies cut a deal with landowners, but in a growing number of cases, the decisions are being made in a courtroom, not around the kitchen table.

Back at O'Keefe's kitchen table, Margaret's brother Dick explains that the family didn't like how they were being treated by representatives from the pipeline.

"We, as small landowners, we can't afford to fight this pipeline company," he says.

So they said no deal to selling their land. And the company's response?

Crosstex didn't respond to an interview request. But court records confirm the company did start legal proceedings against the O'Keefes. In many states, companies have the right to use eminent domain. That refers to the power to have private land "condemned," forcing the owners to sell it.

The process involves sometimes drawn-out court battles across the country. And the legal profession loves it, says William Christian, an Austin-based lawyer who represents landowners.

"Pipelines are going up everywhere, and that leads to a lot of condemnation cases," he says.

But Don Santa, head of the Interstate Natural Gas Association of America, says he thinks that isn't great news for the industry.

"It takes resources," Santa says. "It is time-consuming, but again it has always been part of the process."

So if landowners don't want lawsuits, and companies aren't crazy about them, why do they happen? For one thing, environmentalists who oppose fossil fuels fight the pipelines carrying them. And second, Christian says, the industry is changing, too.

U.S. oil production has increased 30 percent in the past five years, and natural gas is booming. As long as that trend continues, Christian sees no end to these disputes.

And this litigation — or at least the threat of it — was enough to convince the O'Keefe's to settle, Dick O'Keefe says

MOSE BUCHELE is a reporter for StateImpact Texas. StateImpact is a collaboration between NPR member stations examining the effect of state policy on people's lives.