The largest U.S. bank “mis-characterized high-risk trading as hedging,” and withheld key information from its primary regulator, according to a report today by the Senate Permanent Subcommittee on Investigations. Managers manipulated numbers and pressured traders to overvalue their positions in an effort to hide losses in a “monstrous” credit derivatives portfolio in London.

JPMorgan, regarded on Wall Street as one of the best- managed banks in the world, lost more than $6.2 billion over nine months last year in a bet using derivatives, in which the bank wagered on the creditworthiness of companies. The portfolio became “huge” and “monstrous,” according to excerpts of e-mails and recorded conversations from trader Bruno Iksil, nicknamed the London Whale because his portfolio was so large it moved markets. 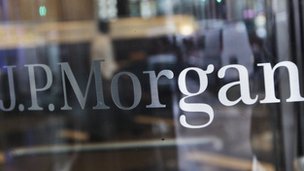 Bloomberg News first reported on April 5 that Iksil had built an illiquid book of derivatives. The Federal Reserve and Office of the Comptroller of the Currency sought additional information about the trades following media reports.

The portfolio had a $415 million loss on April 10, the first trading day after news reports appeared. JPMorgan’s communications officer met with reporters to say that the activities were for hedging purposes and that regulators were fully aware of them, “neither of which was true,” according to the subcommittee’s report.

“Prior to the media reports in early April 2012, the synthetic credit portfolio had not been mentioned by name in any JPMorgan Chase public filing; over the next month, the SCP received sustained attention in the bank’s public filings, investor calls, and media communications,” the subcommittee said.

The OCC noticed that JPMorgan began withholding the chief investment office’s daily profit-and-loss report, which shows how much money the unit made or lost on a given trading day, in late January or early February of last year. Dimon told executives to stop sending the data “because he believed it was too much information to provide to the OCC,” the report said, citing an interview with JPMorgan’s head OCC examiner Scott Waterhouse.

The bank also said there was a data breach that prompted the company to limit the disclosures. When Dimon found out that then Chief Financial Officer Douglas Braunstein agreed to resume the reports, the CEO “reportedly raised his voice in anger” the report said.

“In contrast to JPMorgan Chase’s reputation for best-in- class risk management, the whale trades exposed a bank culture in which risk limit breaches were routinely disregarded, risk metrics were frequently criticized or downplayed, and risk evaluation models were targeted by bank personnel seeking to produce artificially lower capital requirements,” according to the report.

Dimon and Drew were among bank managers who spoke with the panel’s investigators. Several ex-employees refused to be interviewed, including Achilles Macris and Iksil. The panel said itcouldn'trequire them to cooperate because they live outside the U.S.

Patrick Hagan, at one point the CIO’s senior quantitative analyst, told investigators that he was never asked to analyze the bank’s other assets.The credit bets were called a “make believe voodoo magic ‘composite hedge,’” by an examiner at the OCC, according to the report.Days later, Braunstein told investors and analysts on a call to discuss earnings that the credit bets were a hedge that lowered risk. Dimon that day dismissed accounts of the loss as a “tempest in a teapot.”

“None of those statements made on April 13 to the public, to investors, to analysts were true,” Levin said. “The bank also neglected to disclose on that day that the portfolio had massive positions that were hard to exit, that they were violating in massive numbers key risk limits.”

When the largest and "most respected" financial institutions of Wall Street, have left simple ethics and professional business standards without regard to moral code, or loyalty to clients, community or country, then capitalism must be regulated. It has proven that it cannot regulate it'self. Incidents like this destabilize the Western nations which grew on the philosophy of capitalism. They now are a threat to the stability of the very capitalism that they devised, and in being so, have become a threat to the stability of their nations. We in the USA must see that total free market capitalism without wise regulation, leads to destruction, just as threatening to our nation and way of life, as any terrorist attack. BBB- Publisher, www.BootheGlobalPerspectives.com