Aquaponics, GROWING TREND to 'grow your own' 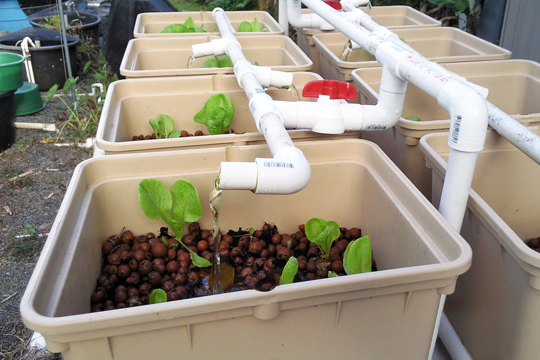 NEW TREND IN THE WORLD

From Australia, to California, Arizona, New Mexico, Texas, on to Chicago, and even atop New York high rise buildings there is a new "mini trend" in society. Thousands of educated people are finding new ways to "grow their own". There is an idea that the current system of food supply is not fresh and healthy and more and more people feel that the food chain may be vulnerable to disruption. So, people are growing their own.

Ben and Saneh Boothe have developed prototypes to study and learn about food growth. "Our parents and grandparents knew all about growing food, canning and enjoyed the benefits of fresh food. We are learning it from scratch." said Ben. His 87 year old mother, often gives him pointers that he considered priceless.

At their Texas "Boothe Ranch" they have:1. A vineyard2. A small orchard with peaches, olive trees, hazelnut trees3. Two greenhouses4. The greenhouses have 4 levels of food production:1. hanging pots when watered drip into2. raised beds in plastic containers, which when watered flow into3. traditional row crops in the earth5. Hydroponic/Aquaponic system that raises fish, then pumps the water filled with organic ammonia, nitrites, that algae convert to nitrates which the plants each and add oxygen back to the water which circulates back to the fish.6. Algae, Spirulena production tanks7. Drip irrigation8. Wind turbine makes the electricity to run irrigation well9. Solar panels power the aquaponic circulation pump

The Boothe's have experimented with solar panels to bury hot water lines 18" below the surface, to sub heat the soils, to provide almost year around production. The heated soils will keep the greenhouse warm even when it is freezing outside."We have fresh vegetables that we pick around sunrise every morning, and eat them for breakfast." Said Ben.

"In my Persian home, my mother says that when you pick food fresh and eat it you absorb a life force. In English, you might call it nutrition, but it isn't as expressive as in my language."Life force. Grow your own.

NOTHING GOES TO WASTEThere are other benefits. What food they don't each, can, give away or sell, they feed to the horses on the Boothe Ranch."There is a certain connection when you watch the sun rise, touch the soil, and center yourself as you pick fresh vegetables and pull weeds. There is a song,

THE GARDEN SONG, that Peter Paul and Mary performed. I find myself humming it as the sun rises."says Ben Boothe. Those words come from a man who has done business from Wall Street to Asia, managed banks, and deals in high finance. "It is healthy, in more ways than one."

Interest in their research and experiments have taken Ben and Saneh to Arizona, Dubai, even to St.Croix, where they are planning to put in a campus of greenhouses, powered with wind and solar. "That project is a first stage investment of $3,500,000, but can grow into a growth, canning business. It can feed hundreds, perhaps thousands of people" says Boothe. The Green Fire Times of Santa Fe, New Mexico is featuring their "Eden Gardens Project", in the July, 2012 edition.