It took only a small team of U.S. soldiers to overwhelm the fortified, walled compound of Osama Bin Laden. In less than 45 minutes, the matter was completed. In a complication, one of the helecopters malfunctioned and had to be abandoned and destroyed. 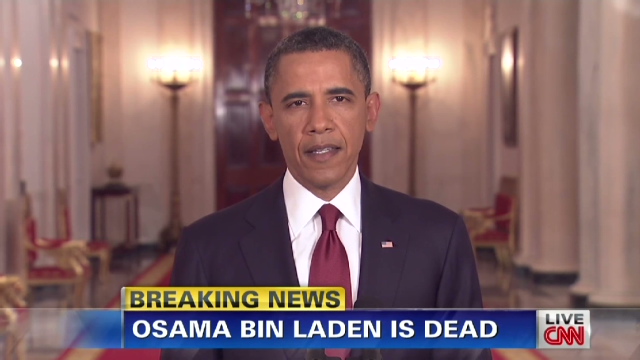 The leader of Al Qaeda, was headquartered in Pakistan, a "friend"of the United States, just a few miles north of Islamabad, the capital of Pakistan.

Osama Bin Laden was first reported to have fought back, as did his son and apparently several woman, one his wife, who were first said to be utilized as human shields. These reports were later modified. Reports have been mixed, one report said that Bin Laden didn't have a weapon, but reached for one, another said that Bin Laden fired his personal weapon and was quickly dismissed with shots from an American soldier. Later reports said Bin Laden did not fire but "reached" One soldier remarked: "Bin Laden Osama died as he lived, letting others face death while he hid behind. He died like he lived, hiding behind others, letting others face death while he stood behind."

As news hit the internet, social media showed the highest internet volume in history. It seemed that the entire world breathed a sigh of collective release. The word "Closure" was in order. The symbol of terrorism, the symbol of the "man" who caused death, destruction, and started events that led to two wars was finally executed by American soldiers.

World leaders, religious leaders, even Islamic leaders voiced their approval that this man had been put to rest, not because of a bloodthirst, but because it was something that seemed certain to happen, in the name of justice. There was a widespread since of "closure" throughout the world. When Osama Bin Laden master minded and financed the 9/11 attacks, he caused a ripple in human relations throughout the world. His life, constantly created strife, death and conflict. The source of those ripples, with his death, perhaps will lead to peace and reconciliation. A good book says: "By their fruits you shall know them". Bin Laden's life fruits were violence, warfare, destruction, strife. Those who followed him generated similar fruits of hatred and darkness.

Osama Bin Laden, was a member of the prominent Bin Laden family of Saudi Arabian oil tycoons and sheiks, that had friendships and business alliances of prominent people throughout the world, including George H. Bush, former U.S. President. Let it not be forgotten that when thousands of American jets were grounded, the Bush family let their Arabian friends quietly fly their jet, out of American airspace.

Surprisingly, George W. Bush, who declared that he "Would find and kill Bin Laden"many years ago and made dramatic "cowboy statements" such as "I will get him dead or alive" was unsuccessful. Bin Laden, born of wealth, had the means to "buy" privacy, and had built a mansion in Pakestan, to hide in, in luxury suitable to his financial standing.

The Bin Laden family business conglomerate and Saudi Arabian interests have funded and donated hundreds of millions of dollars to various enterprises including religious schools that teach "anti Americanism", military activities and flowed funds into Pakistan that served to support efforts to fight Americans in the Middle East and create terrorist activities. It is ironic that two nations considered American allies, Pakistan and Saudi Arabia, have provided such significant elements of support for Anti-American groups. The goal of their leaders has apparently been political survival in the face of extremists and terrorists, who have been influenced (and funded) by people such as Osama Bin Laden and the wealth flowing through his hands.

Many experts believe that the government of Pakistan has been aware of Bin Laden's presence in Pakistan and many believe that surely the Saudi Arabian "Bin Laden" family has known of his activities. Surely the Bin Laden family had the money to buy privacy for Osama.

Many military and political leaders said that Obama's leadership in handling the Bin Laden matter was "Brave and Gutsy". Even Republican cheerleader and radio host Rush Limbaugh said:

“Ladies and gentlemen, we need to open the program today by congratulating President Obama,” Limbaugh said Monday afternoon at the start of his show. “President Obama has done something extremely effective, and when he does, this needs to be pointed out.”

Democrat President, Barack Hussein Obama, achieved what the George W. Bush team could not do. Obama's group, organized an effort to enter Pakistan, without knowledge or participation of the Pakistani government for security reasons. U.S. Navy SEALS, surrounded and took over the guarded mansion compound of Bin Laden. Ironically the compound was next to a Pakistani military center. After a firefight of 45 minutes, an American soldier confronted Bin Laden, who positioned himself behind his wife."I am not armed" Bin Laden reportedly said, and then reached for a weapon. That was his last action on this earth.

Senator John McCain, who was defeated by Obama for President, said: "It took courage and determination for President Obama to do this. I congratulate him." Other Republican leaders were stunned and voiced their praise of Obama for this achievement. Former President Bill Clinton and George W. Bush expressed support and praise for Obama's achievement in finding and executing Bin Laden.

Mike Ghouse, President of the World Muslims Congress said: "This is the end of an evil man and we pray that an evil era ends with him." he continued "Bin Laden was not a Muslim leader; he was a mass murderer of Muslims. Indeed, al Qaeda has slaughtered scores of Muslims in many countries, including our own. So his demise should be welcomed by all who believe in peace and human dignity."

It is now known, that while Obama was dealing with Don Trump's "Birth Certificate" boondoggle, that he was secretly in intense meetings in the situation room, planning this strike on Bin Laden. A popular Internet message broadcast by Fox News in Indiana showed an image of Obama saying: "I'll get a copy of my birth certificate to you later, at the moment I am busy getting Osama Bin Laden." This correlated with Obama's public statements that "I have important work to do" and that he didn't need "birth Certificate distractions". This reduced the Donald Trump campaign and other "birth Certificate fanatics" to triviality.

Nationally, the USA kept air travel on high alert, while experts indicated that this was a severe blow to Al Qaeda, as well as other terrorist groups. The scope and scale of the United States ability to effectively deal with radical and extremist Islamic groups was reaffirmed by this action. Terrorist leaders and activists are on notice, that the USA will be persistent and effective in dealing with them. Even wealthy terrorists that are protected and hidden by governments or friends, are at risk, and are to be rooted out. Many believe this is the "Beginning of the end" of the "War on Terror" because so many of Al Qaeda's leaders have been captured or executed. The billions we give to Pakistan will be under review and their leaders will be brought to account. Pakistan will likely renew it's relationships with Russia and China.

Many Americans breathed relief, while heads of State of many governments spoke up and indicated their joy and congratulations. Moderate Islamic leaders, such as Harris Zafar of the Ahmadiyya Muslim Community spoke up, indicating that "Terrorism does not reflect true Islamic standards". Other Islamic scholars and thinkers had the courage to voice similar hopes that moderation and the true love ethic of Islam could now re-emerge.

A closer look at the United States alliance with the Government of Pakistan and Saudi Arabia is in order. Richard Holbrook, the American government official, before his death indicated that both Pakistan and Afghanistan were dominated by corruption and lack of transparency. Holbrook constantly hinted that he believed our "allies" knew more about Bin Laden than they disclosed to the USA. Others have suggested that Saudi Arabia has funded anti-American religious institutions and groups.

It seems that the old skit "Who's on first" could be a relevant reminder that our nation is essentially uncertain as to "Who 'Who' is" in the Middle East and we have long been plagued by a lack of in depth understanding of the culture, the religion, and the relationships.

U.S. involvement in this area has long been dominated by economic oil interests and thus government policy has often been directed by greedy oil company interests and our own nation's worst instincts in the region. It is no wonder that the spiritual leaders there distrust us. They have been exposed to some of the worst elements of American culture. Better to say, they have never been exposed to the best of our culture and have had little or no exposure to the idealistic and "good" part of American culture.

As we re-evaluate our involvement in the Middle East we would do well to follow the advice given in the book: FLOWERS FACING THE SUN that was published 10 years ago. That book suggested that we create an atmosphere of intelligent connection based on integrity and mutual respect, acceptance and tolerance, especially in religious and cultural matters. To spend a decade and hundreds of millions of dollars to execute a person such as Osama Bin Ladin, or to create two wars starting with 9/11, to have spent hundreds of billions, no, trillions of dollars on wars, and to have been a part of thousands of American deaths and over 200,000 other war deaths (50,000 of the women and children) we must admit that something in our system of relationships has failed. Did we do this for oil? For homeland security? For revenge? Or was it a policy to somehow extend American power in the face of an emerging China and to control oil assets? Was it because of some of all of those things.

Whatever, many people have died and the American economy is in the deepest trouble in 40 years. We have squandered our wealth, our blood, our spirit, in the Middle East with little to show for it except echos of "USA, USA" coming from cadets of West Point.

Now, if this is truly to be the beginning of the end of the "War on Terror" then a complete reevaluation of our relationships in the Middle East is in order. A global policy based upon respect, high ideals and friendship, rather than greed and oil exploitation, would be a good direction. We need to realize that, as the Book of Ecclesiastes says: "There is a time for war and a time for peace." Now is the beginning of a time for peace.

If we have any "billions" left, perhaps we should spend it creating jobs and security for American families, now.

Ben Boothe Sr., has worked as an economic and development consultant for the World Bank, the USIS, USIA, and the State Department. His site is: http://www.benboothe.com Global Perspectives, commentary and articles (over 600) are posted at:http://www.bootheglobalperspectives.com