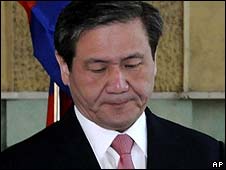 The incumbent President said his rival had won a "narrow victory"

When in 1990 the Democratic Party of Mongolia ran against the Communist Party, the idea was to bring the nation forward with progressive new ideas. The Democrats won, and much of the nation's economy was deregulated, and the largest businesses were privatized. Within a short time a few wealthy people in Mongolia controlled many of the largest companies, and the nations people still lived in poverty.

The Democrats lost because of "corruption" and the communist party has pursued a "gentler and kinder" policy, allowing capitalism. But corruption within Mongolia has remained. Now the Democrats have won again and hopes are high that Mongolia's economy will benefit from new leadership.

The leader of the Democratic Party and two-time former prime minister, Tsakhiagiin Elbegdorj, had campaigned on an anti-corruption ticket.

Incumbent President Nambaryn Enkhbayar (nicknamed "father of the bribe") - of the former Communist party - admitted a "narrow" defeat. Official results are yet to be released.

The election campaign was dominated by the issue of distributing the country's vast mineral wealth.

He said that, according to parties' counting of the votes, Tsakhiagiin Elbegdorj - his only rival in the election - had won a narrow victory.

Mongolian media are also reporting that Mr Elbegdorj has won.

Speaking earlier, the Democratic Party chairman told supporters that Mongolia was "meeting a new morning, with a new president".

The BBC's Quentin Sommerville in Beijing says there were fears that a close result could lead to civil unrest.

Allegations of vote rigging during last year's parliamentary poll sparked protests in which five people died and hundreds were hurt.

Reports from the capital Ulan Bator say that the streets are calm but police and troops are on stand-by in case of trouble.

Democracy and privatisation were enshrined in a new constitution, but the collapse of the economy after the withdrawal of Soviet support , as well as massive "deregulation" triggered widespread poverty and unemployment in the sparsely-populated, landlocked country. In recent years Ulaanbator has shown remarkable growth, with new buildings, shopping, apartments and housing. But when the U.S. Economy collapsed, this had implications on Mongolia, with copper and silver prices unstable, and oil and gas prices declining. Mongolia has rich copper, silver, oil and gas reserves.

Monoglia is a nation of rich history, culture and natural resources. The political and business climate there needs leadership with maturity and integrity. Reforms in the area of real estate law, defaults, forclosures, litigation reform, and a means of making the court process efficient and fair are necessary for Mongolia to move forward. Thus far, every politician who has opposed corruption, has made little progress, because many members of the government, parliament are personally compromised financially by business interests.

One of the hardest challenges is to move a nation to a higher ethical level in it's political and business culture. We wish this new leader of Mongolia success.