TEHRAN, Iran (CNN) -- Dancing in public in not allowed in Iran, but thousands could hardly contain themselves at a recent presidential campaign rally in the capital city, Tehran. 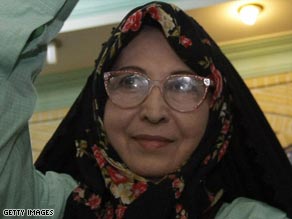 On this day, the deafening cheers were not for presidential hopeful Mir Hossein Mousavi, but rather for his wife -- a woman some are calling Iran's Michelle Obama.

The comparisons to the first lady of the United States stem from the role Zahra Rahnavard is playing in her husband's quest for the presidency.

Never in the history of Iranian presidential elections has a candidate put his wife in the forefront of his campaign.

Wherever Mousavi -- a centrist candidate -- goes, Rahnavard is usually nearby. Watch more about Zahra Rahnavard »

"We look at her and we say, 'we want to be like her in the future, ' " said Shakiba Shakerhosseie, one of 12,000 people who packed into Tehran's indoor Azadi (Freedom) sports stadium to hear Rahnavard speak.

Iran became an Islamic republic in 1979 after the ruling monarchy was overthrown and Shah Mohammad Reza Pahlavi was forced into exile.

The revolution also ended the ceremonial role of first lady that the last queen, Farah, enjoyed.

At this rally, Rahnavard -- a writer and art professor -- spoke for her husband, who was campaigning elsewhere.

Wearing a floral headscarf and a traditional black chador -- a full-length loose robe that women in Iran wear like a cloak -- Rahnavard called for freedoms she says were lost during President Mahmoud Ahmadijenad's term.