source of article from BBC News

Venice has been put on flood alert, with Italian officials warning the sea could rise 1.6m above its normal level - the highest in almost 30 years. 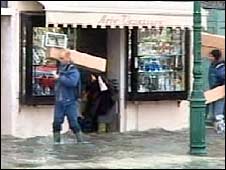 Many of Venice's streets, including the famous St Mark's Square, were already under water on Monday morning.

The lagoon city in the Adriatic suffers some level of flooding for about 200 days every year.

The authorities are planning to complete building an underwater dam to protect the city by 2011. 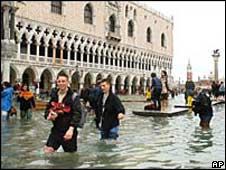 The flooding could reach as high as 1.66m above sea level by noon (1100 GMT), Venice's Centro Maree, which monitors water levels, warned on Monday.

St Mark's Square and the rest of the city's historic centre were already submerged under almost a metre of water by late morning on Monday.

The monitoring centre said the tide was being pushed by strong winds.

In 1966, some 5,000 people in Venice were left homeless after an even higher flood hit the city.

PS to article: The unspoken question is whether the sea level rising and more frequent flooding is caused by Global Warming. As the earth has warmed, and the north and south poles have reported massive melting of the Ice Caps, experts have warned that flooding would expand world wide. Is Venice our "picture" confirmation of this process?