Karbala, the Richest City in Iraq, Rebuilt by Americans 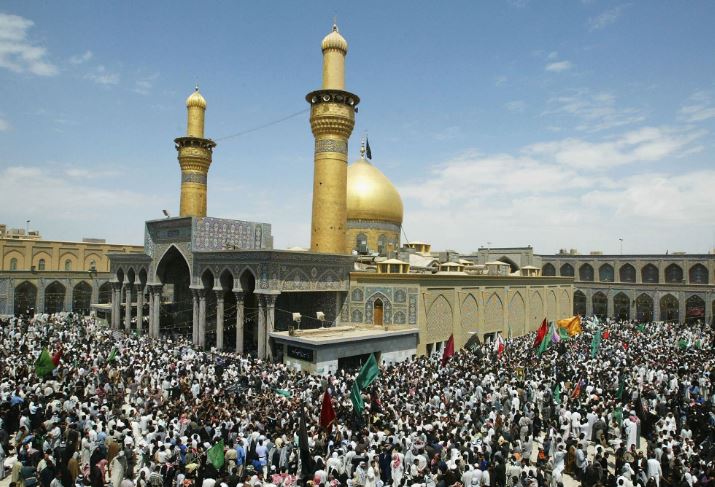 Did you know, the richest city in Iraq, has also had millions of dollars of investment by the USA to rebuild it? We thought you should know of this key city, that has emerged as one of the power centers of the entire region.

One cannot truly understand Iraq, unless you understand this place and the historical implications for the future, and impact upon conflict in Iraq.

If you wonder why Iran is interested in Iraq, Karbala holds the answer. Iran is not interested in Iraq for purposes of power or greed. Karbala holds the historical and spiritual key to the conflict of Sunni vs Shia.  It thus is a key to the conflicts of various upstart groups such as ISIS, because it goes back to the issue of "successorship" of Mohammed.

It is a center of Shia religious practice, and millions of Iranians consider it a place of holy pilgrimage. Indeed for a while Iraq's military prohibited people from coming in at gunpoint, and many were killed.

This city has huge spiritual influence, and thus, in the mix of the culture, huge political influence on Iraq. It will be a city to watch in the future, because it may become the most influential area of the nation of Iraq, and even the neighborhood of nations:

Karbala is a holy city for Iraqi Shia because it holds the shrine of the martyred Imam Husayn ibn Ali, whose death here in 680 and the subsequent conflict over succession of the caliphate distinguished the Shia from the Sunni sects of Islam.

Karbala is also the site of the holy shrine to Husayn's brother, Abbas, who was martyred in the same battle. Shia make pilgrimages called Ashura to Karbala twice a year to commemorate Husayn's death-on the 10th day of the Muslim month of Muharram and 40 days later in the month of Safar. In recent years, however, the government has attempted to prevent Shia pilgrims from entering the city, causing tension. Because of its shrines, Karbala became an important center of Islamic learning and theology. 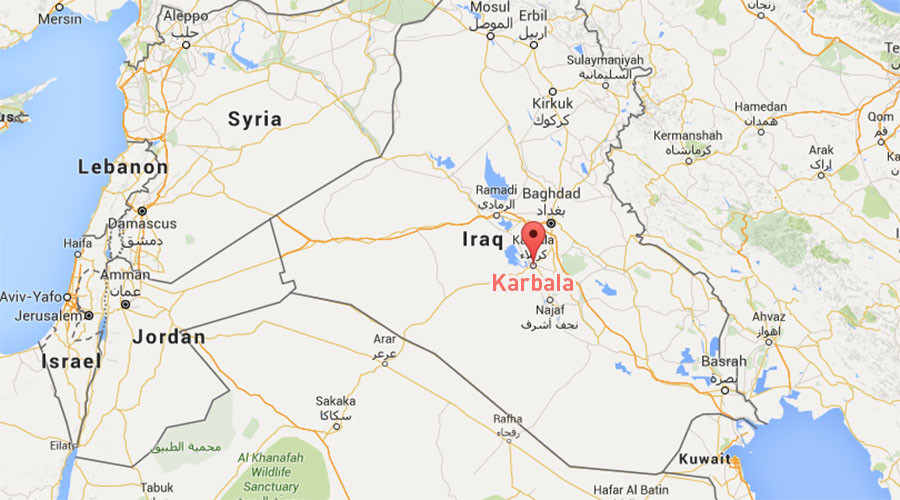 At the edge of the desert, surrounded by beautiful greenery of fruit orchards and palm groves lies the holy city of Kerbela. The city is built around the twin Shrines of al-Hussein and that of al-Abass. Kerbela includes: the sacred city with its twin shrines to al-Hussein and al-Abbas, the core of the old city, including the souq between the mosques. Karbala has more than 100 mosques and 23 religious schools, with Imam Hussein's shrine as the city's centerpiece.

The word Karbala is formed from two Assyrian words which are (Karb) means sacred place, and the word (Ail) also means (God). Therefore both two words means (sacred precinct of Allah). Some also said the word is a Persian origin formed from two words which are, (Kaar) means work and (Bolo) means the higher, thus the meaning of the both words is ( the higher work). One of the names of the city is (Taf). Verily, it can be assumed that the word Karbala is derived from the word (Al-Kirbah) means softness, considering the softness of land. Therefore it was named as Karbala due the softness of land. Or it may be derived from the word purity, because it is used to said in Arabic (Kar'baltul Hintah), means I purify the wheat or made it clean it. So based on that we can say Karbala is named as Karbala because the land has been purified from pebbles and jungle. The word Karbala is also a name of plant of wood sorrel, so may be the city is named as Karbala considering that there is a lot of this plants in the city.

Karbala is one of the most holy cities in Islam, but it is for the Shi'is that it plays the most important role. It witnessed great events which left their mark on Islamic history, Imam Hussein bin Ali and his brother Abbas together with many others, who are buried in their two great shrines in the city. Al-Hussein is the second son of Imam Ali (who is buried in Najaf province, southern Iraq, some 80 kilometers south of Kerbela) and grandson of Prophet Mohammed. Facing al-Hussien's Shrine is that of his younger brother al-Abass. Al-Abass was also martyred in the same tragic battle as al-Hussein. He was ambushed while trying to get badly needed water to his brother and his followers.

In 680 Husayn ibn Ali made a claim at the role of Caliph, as the representative of his grandfather Prophet Muhammad. His group had been promised that they would take over the Caliphate, when Caliph Mu'awiyya died. But upon his death in 680, this promise was not kept, and Mu'awiyya's son Yazid seized power. Husayn opposed this, and with a tiny army, only around 70 men, women and children, he faced Yazid's far more sizable army at Karbala. In this battle Husayn and all his companions were killed. This story is central for Shi'is today, and has gained a position in the Shi'i thinking not all to different from the crucifixion of Jesus in Christianity.

Twice each year -- on the 10th day of the Muslim month of Muharram and forty days later in the month of Safar -- Shi'a pilgrims from throughout the country and around the world seek to commemorate the death of the Imam Hussein in the city of Karbala. Each year, about two million Iranian religious tourists go to Najaf and Karbala to visit the mosques. The Baath Government had for several decades interfered with these "Ashura" commemorations, preventing processions on foot into the city. In both 1998 and 1999, violent incidents were reported between Iraqi pilgrims and Ba'ath party members and security forces enforcing the ban, though nothing to equal the clashes of 1977 when thousands were arrested and hundreds killed.

Some devout Shi'a, wishing to avoid confrontation, tried to select other significant days in the Muslim calendar for their pilgrimage. In 1998 Ayatollah as-Sadr announced that the 15th of Sha'baan -- the anniversary of the birth of the Twelfth Imam (which fell in November that year) -- would be an appropriate date for pilgrimage to Karbala, but the Government reportedly prevented pilgrims from entering the city. Shi'a expatriates report that groups as small as 10 to 20 pilgrims attempting to make their way into the city at other times were arrested. Shi'a sources reported that Ba'ath Party militia forces clashed with Shi'a pilgrims attempting to commemorate Ashura in May 1998. The interference reportedly was especially severe at Karbala, Basra, and the al-Thawra district of Baghdad.

In May 2000, the Baath Government issued orders prohibiting the walking pilgrimage to Karbala. The Government reportedly deployed more than 15,000 Republican Guard troops armed with light weapons and in civilian clothes on the main roads leading into both Karbala and Najaf to enforce the prohibition. Travelers later reported that security troops opened fire on pilgrims who attempted the walk from Najaf to Karbala as part of the 40th day ritual. Shi'a expatriates report that groups as small as 10 to 20 pilgrims attempting to make their way into the city at other times also have been arrested.

On March 2, 2004 at least 143 Iraqis were killed in terrorist attacks in Baghdad and Karbala. Suicide bombers attacked Shiia Muslims as they observed Ashoura, the holiest day in the Shiia calendar. Ashoura commemorates the death in battle of Hussain, the third Shiite Imam, in AD 680. In Karbala, there was an explosion in the center of the city as well as explosions on a road used by Shiite pilgrims leading to a Shiia shrine. Officials said the blasts were intended to maximize civilian casualties. These attacks killed at least 85 Iraqis and wounded 230.

Millions of Shi'ites attend the Arbeen [Arba'in] (40th day) Celebrations in Karbala. By 01 April 2004 Shiites started to march towards the holy city of Karbala as part of the preparations to mark the end of Ashura on 11 April 2004, the 40 day celebration to mark of death of Imam Hussein. It is customary among both Muslims and Christian Arabs to mark the 'arbeen (40th day) of the death of a loved one, a family member, a relative, or a friend.

By mid-May 2004 coalition forces defending the buildings near the Mukhaiyam Mosque in Karbala continued to be attacked by Muqtada's militia with sniper, RPG and mortar fire. There were numerous engagements originating from the Iranian quarter in the downtown area of Karbala near the two holy shrines. Muqtada militia elements were staying close to the shrine of al-Imam al-Hussein, as they are aware of concerns that the shrines not be damaged. Coalition forces near the Mukhaiyam mosque were attacked with two rocket-propelled grenades and small-arms fire. Muqtada militia occupied the second floor of the al-Imam al-Hussein shrine in downtown Karbala and directed sniper fire from the western wall of the shrine on to coalition forces at the al-Mukhaiyam mosque. Muqtada's militia also fired on them from the streets and buildings of the Iranian quarter across from the al-Mukhaiyam. Half of the Mukhaiyam mosque, less than a mile from the Imam Hussein shrine, was destroyed in the fighting. The mosque had served as a base for al-Sadr followers.

Insurgents struck three targets in Karbala on 27 December 2003, killing four Bulgarian soldiers, two Thai army engineers and six civilians, and wounding dozens of troops and civilians, coalition authorities said. At least 37 troops, including five US soldiers, were hurt in attacks that targeted a police station, the town's city hall and Karbala University, where the six killed soldiers were living in barracks. More than 100 civilians were injured.

The 2nd Battalion, 114th Field Artillery has assisted the people of Karbala since mid-January, providing security and infrastructure support.

The battalion is a U.S. Army unit assigned to the 155th Brigade Combat Team serving with the II Marine Expeditionary Force and has relocated to other bases throughout their area of operations. Sufficient forces remain available to offer any assistance as needed.