Wall Street Panic due to Deregulation and Abuses

We have watched with great interest, the turmoil on Wall Street.

A. We have heard a great deal of talk about how that “De Regulation” and the removal of protections for the American banking system, and the financial system led to this crisis.

But we have heard only a few people, remind us that the “removal of import/export protections” of our manufacturing sector, essentially has destroyed our industrial base over the past 20 years. One must wonder why the Financial Sector has been repeatedly bailed out, while the Industrial Production sector has been allowed to die?

It would seem that if we want to achieve true “rebirth” of the American economy, we need to also consider, in this time of “Billions for Big Boys”, allocating a few billion, to help rebuild our “productive” sectors, such as manufacturing, agriculture, small business, mining, wind power, and start ups. You know, those areas that truly generate new capital and jobs, (not just the service economy of Wall Street).

B. One report has been overlooked by the media. That report stated that evidence was uncovered that showed that the Bush Administration had already planned for a “Bail Out” for the financial services “crisis” that had been prepared 6 months ago. Had they foreseen this crisis? Did they know it was coming. If they knew it was coming, why didn’t they take steps earlier to forestall this?

C. STAMPEDE THE VOTE: I was always taught that when someone tried to stampede you to rush to judgment, there must be some details they didn't want you to consider. We wonder, why would they have a bail out plan already written, and then pretend that this is now a new event that must be approved “immediately” with no checks and balances, no legal oversight, and essentially give the financial community of Wall Street $700 billion dollars, to save losses on their balance sheets without any fundamental reform in the system, that would require accountability, appropriate regulation, and a long term view that keeps the financial system of the United States operating as a regulated, capitalistic system? We also wonder, why so many on Wall Street who have profited by the millions, get a ‘free pass’ without even a hint of legal justice?

D. We also have heard the quotes from conservatives who repeatedly have said that at least one item of the “conservative agenda” has been to leave the nation in such a condition, that any successor president, would have to cut spending on social services, Medicare, Medicaid, Social Security, children’s services, and others, to assure that Democratic proposals such as universal health care would not be possible or affordable. 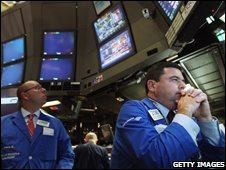 Train wreak on Wall Street takes it's toll on a broker

The Bush Administration’s handling of the economy has left our nation deeply in debt, with less liquidity, and with less financial strength, than the Unites States has had in over 100 years. Our nation, because of the “Conservative Agenda” of tax cuts, wars, poor budget planning, corruption, and deregulation, is in deeper debt, and in the weakest financial standing, since the Great Depression. Furthermore, there is no assurance that the USA will not go into some kind of extended depression or recession, of many years, to dig our way out of this mess.

Bush, Bush, Reagan, and even Clinton, preached "De-Regulation". Those of us who have done work with the World Bank, or with the USIS, or USIA, or State Department, and who are in business, knew this would eventually lead to recession or financial crisis. It will also lead to every American having a lower standard of living.

E. Regarding regulation and deregulations and the merits of both. If you are on a highway, and the police are removed from giving tickets, (deregulation) and the government takes down the speed limits. Who is really to blame when the big trucks crash from going to fast and out of control? Of course the truck drivers are guilty.

But, those who raised the speed limits and took away the laws and regulations are just as guilty. The blame has to be laid at the feet of the politicians who for years were influenced and "bought" by big business that demanded no regulations. Politicians who should have learned from the "Keating Five" S&L debacle, years ago, kept preaching "Deregulation" and law by law, denuded our banking and financial system.

No one particularly likes "regulation", just like no one likes speed cops. But we all feel a bit safer knowing that there is someone to keep drunks from speeding down a highway at 120 mph, endangering everyone. So, regulation has a place in our society and especially in our economy.

Now, what do we do? Here are a few suggestions that me and a few of my economist friends have put together.

And this is just the beginning. We did many of these things, under the leadership of Franklin Roosevelt after the debacle of 1929. How well history repeats itself. But from the 1940's through the "regulated era" that lasted until the 1970's we had the most stable economic period of our nation's history. Now it is time to clean house and start over.