Ethan Boothe For Fort Worth Business Press - 40 Under 40 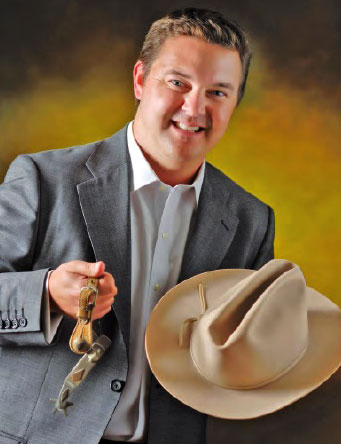 In the late 1800s, a family from Georgia made their way to the Texas Panhandle. They were one of the first families in the area,and among the first to try growing cotton in the previously untilled land.

Several generations later, Ethan Boothe has tangible evidence of his family’s legacy. A fifth-generation Texan and third-generation Fort Worth native, Boothe has the Stetson his great-grandfather, who was just a boy when his family trekked halfway across the country,wore on weekends and for special occasions.

Boothe and his family still hold on to that adventurous spirit. As a senior manager for Deloitte , he provides financial guidance to companies and their employees with multinational offices.

Personally, he grew up in a family that spent a lot of time outdoors and he is doing the same with his young family, he says. “We are definitely an outdoor activity-oriented family,” Boothe says.

In the office, Boothe works with companies to help manage the finances of their employees. He researches the companies to understand their background and where they are trying to move in the future, and then provides a customized way to manage the company’s global talent.

Part of the intrigue of working in his position is being able to see the inner workings of successful companies in different sectors around the world, he says.

“You really get an appreciation of things that are happening across industries,” Boothe says.

The job also allows for occasional travel. Boothe says at one point he was going to Rome on the business trip,and he asked his then-girlfriend to accompany him. He took a few days off and they traveled to Tuscany, where he proposed. Kristen Boothe, now his wife, and Ethan Boothe are expecting their second child in June.

While you can read about a country or a company,the only way to really know it is to go and see it,he says.

“I don’t think there’s any substitute for the actual experience,”he says.

Who has been your biggest influence?

I would have to say that my late grandfather, Melvin E.Boothe, who passed away in March 1997,has probably had the greatest impact on my life.

Where is your dream vacation spot?

I’d have to split my time between Vail,Colo.and the Pacific Coast of Costa Rica.

Where did your first paycheck come from?

My fist paycheck was probably around 1982 from delivering circular advertisements in West Fort Worth for my grandfather’s Benjamin Franklin 5 & 10 Store.

What was your favorite TV show growing up?

As a youngster you could find me and my brother glued to the TV for The Dukes of Hazard. The A-Team definitely took me through my middle school years and of course Saturday Night Live kept me and my friends entertained in high school.

What book would you recommend?

What is your musical guilty pleasure?

Justin Timberlake, specifically “SexyBack.” I know I’m not alone out there.