This article came from my friend Jake Terpstra, former head of Children's Services, for the USA.

"Russian Defense Minister Sergei Ivanov's four-day visit to China this week was substantial, with an agreement announced Monday to hold 'substantial military exercises on Chinese territory in 2005' (quote from Russia's Interfax news agency). This was Ivanov's second trip to Beijing this year, and Chinese President Hu Jintao used the occasion to assert, 'Sino-Russian strategic coordination has attained an unprecedented high level.' The agreement to hold joint exercises is, in fact, unprecedented, and Hu went on to express satisfaction at the growth in relations between the two armies. Not that you would know any of this from our lethargic press.

The Chinese and Russian news services played up the story, and AP and Reuters correspondents promptly filed detailed reports from Beijing. But most U.S. print media-The Washington Post, for example-ignored the story. The New York Times Tuesday cut it down to two sentences tacked onto the end of a roundup titled World Briefing on page A6. Nevertheless, it is a highly significant development, pointing out how major regional powers are reacting to the policy and actions of what they perceive to be the world's big bully.

The announcement of the military exercises planned for next year comes not long after Soviet President Vladimir Putin, while visiting Beijing in October, said bilateral relations had reached 'unparalleled heights. During his visit, Putin signed an agreement that settled the last of the disputes along the 7,500-kilometer border between the two countries. Those disputes had led to armed clashes in the '60s and '70s, particularly in areas where the frontier is defined by the main channel of border rivers, which meander. Islands ended up being claimed by both sides. The overall political backdrop, though, was China's claim to 1.5 million square kilometers taken from China under what it called 'unequal treaties' dating back to the Treaty of Nerchinsk in 1689. These irredentist claims, a staple of Chinese anti-Soviet rhetoric, have been muted. Putin's October visit also produced an agreement to jointly develop Russian energy reserves, an agreement by which China hopes to help ensure the supply of fuel for its burgeoning economy. Over the past decade Sino-Russian bilateral trade has grown by leaps and bounds. Most important, China has become Russia's arms industry's premier customer.

This year, the Chinese are buying about $2 billion in weapons, many of them top of the line. For Russia, these sales are an important source of export earnings and keep key segments of its defense industry afloat. Cut off from arms sales from the West, Beijing has come to rely on Russia more and more for sophisticated arms and technology. Fears Foreseen For those familiar with the acerbic nature of Russian-Chinese relations over the years, the announcement of joint military exercises should be a wake-up call. The switch from extreme hostility to rapprochement is, in my view, a sea change in the broader strategic equation. The fact that the improvement in ties has been incremental, at least up until now, makes it no less real-or less of a potential threat to U.S. interests. NATO's bombing of Yugoslavia over Kosovo in 1999 had already heightened the need felt by China and Russia to buttress mutual security ties. The experience eroded the confidence each had in its ability to advance and protect its interests by using its veto at the United Nations Security Council. That confidence suffered a far more serious blow when the United States and UK decided to attack Iraq without explicit Security Council approval.

This created even stronger incentive for Russia and China to quicken their rapprochement. Pre-9/11 progress in political, economic and military relations reached a highpoint with the conclusion of a Sino-Russian treaty signed by Presidents Putin and Jiang Zemin in Moscow in July 2001. That treaty reflected a mutual understanding that the two countries need to collaborate closely if they are to dilute what each sees as U.S. efforts to dominate the post-Cold War international order. The invasion of Iraq in March 2003 greatly increased the incentive for such collaboration, which has now been rendered more tangible by the scheduling of joint military exercises next year. Fears Confirmed The Russians and Chinese look on the quicksand in which U.S. forces are trying to stay afloat in Iraq with mixed feelings: alarm at what they see as unconstrained, unpredictable U.S. behavior, and Schadenfreude at the fiasco brought about by ineptitude on the part of senior civilian defense officials and careerism among the generals, many of whom know better but have not the spine to tell their superiors that the war in Iraq cannot be won.

What seems clear is that because of the U.S./U.K. attack on Iraq, China and Russia intend to give each other meaningful political support if Washington embarks on a new military adventure-against Iran, for example. That same assurance of mutual support and cooperation could also serve to embolden the Russians or Chinese for adventurism of their own-vis-a-vis Taiwan, for example, or Ukraine-taking advantage of the fact that the United States is pinned down in and preoccupied with Iraq.

The lid is now off Pandora's preventive box. Just before leaving for Beijing, Defense Minister Ivanov made it clear that Russia 'reserves the right to carry out preventive strikes with conventional weaponry on terror bases anywhere they are found in the world.' Indeed, it may be a short step to applying the 'terrorist' label to those wearing orange in Kiev. Like subterranean geological plates that shift imperceptibly, changes with immense political repercussions can occur so gradually as to be imperceptible-until the earthquake. Over the past several years, there has been rather broad consensus among specialists that, despite the gradual rapprochement between Russia and China, both remain more interested in developing good relations with the United States than with each other. This may no longer be the case." 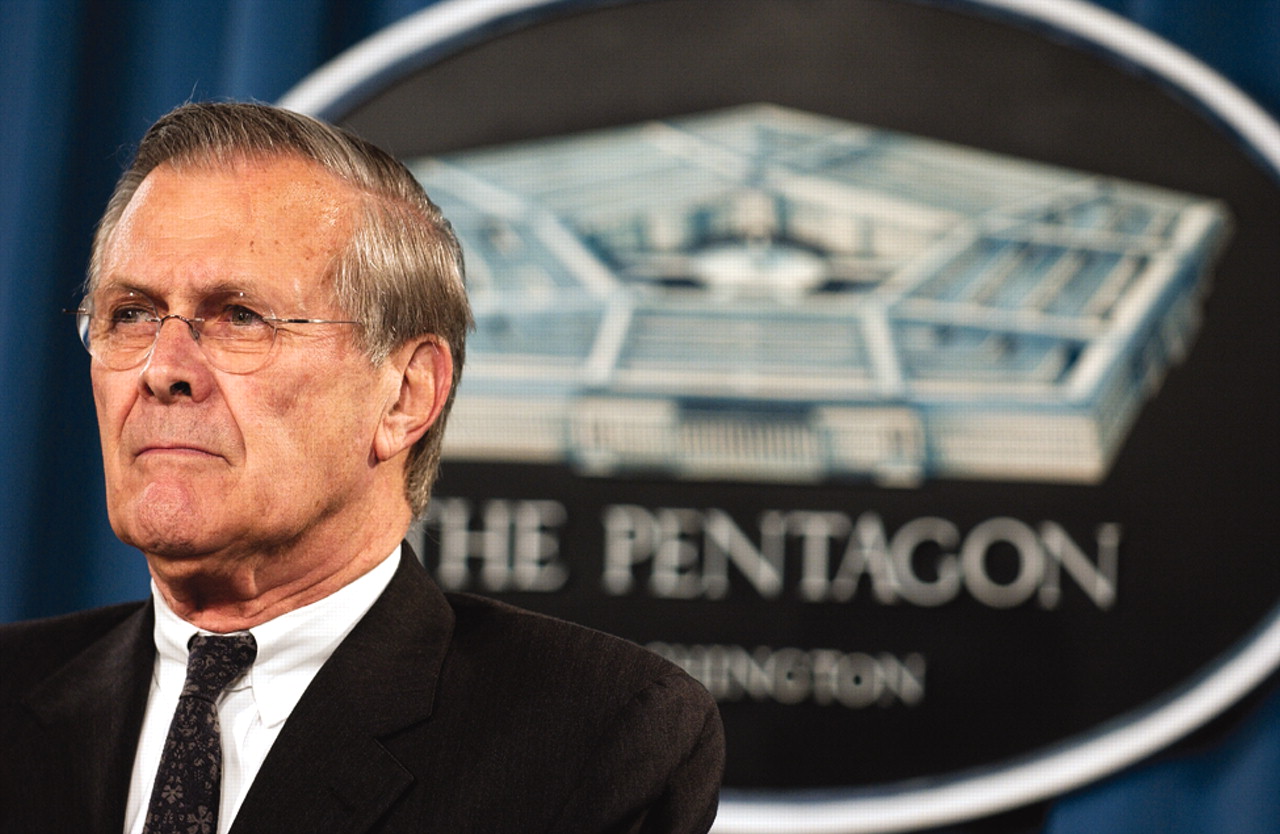 This week, we got another look at Donald Rumsfeld. It was disclosed that he had instructed the defense department to sign all of his letters to the grieving parents of dead solders with an electronic copy. Some thought this particularly callous...the one letter these parents get from the man who sent them there, and was responsible for their welfare, and he couldn't even bother to sign the letters. Perhaps of course, he didn't expect so many to die, in this war based upon false premises, that he largely supported. Perhaps he didn't consider their deaths that important...just another number in war. It does seem to tell us something about this war and this secretary of defense. How can we look our soldiers square in the eye, when they realize that that they are dying at the behest of men who don't respect or care for them...that they are dying for a lie.