Election is over, Bush is elected president, What does it mean? 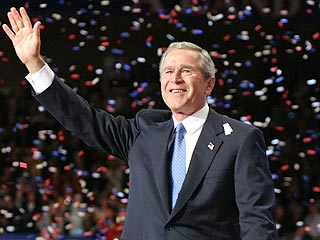 The polls were right. Nearly every poll indicated that George Bush was between 1 and 2 points ahead, and that Ohio, Florida, Michigan, Iowa, and a few other mid-western states would determine the elections. They were right on target.

After John Kerry gave a short and emotional concession speech, George W. Bush gave his victory speech, with a special nod to Texas, "You have been with me the longest!" Over 56,000,000 Americans voted against George Bush, but 60,000,000 voted for him, giving him, for the first time, a majority of support from voting Americans. Studies indicate that while Democrats were successful in bringing young people and new voters to the election process, this was not enough to compete with the millions of evangelical Christians, who overwhelmingly voted for Bush. Many churches had made this election a holy crusade, and churches created a new "2004" mantra of criticizing the concept of separation of church and state.

Thomas Jefferson must have turned over in his grave, during the election campaign, while preachers in pulpits all across America aggressively made elections and politics their purview.

Democrats had the money, the volunteers, and a good strategy. But the Democratic Party could not compete with the emotional impetus of "religious zeal". We have entered a new day of religion and politics in America, and in the world. I foresaw this when I wrote my book: FLOWERS FACING THE SUN (the emerging religion of the global generation). However one feels about religion and politics, it is a tangible presence in this world and will impact political, social, and even business throughout the world. We must call upon the best intellects of the world, to understand, study and to be able to deal with this new trend. It is critical that the GLOBAL GENERATION do so with intelligence, instead of blind religious zeal. Otherwise the world will find itself engulfed in religious conflicts and wars like the world has never seen. That is an important message that the Bush election should send to all of us. We must learn to view the world with greater depth and insight to protect us from the dangers of religious zealotry.

The leaders of the world must learn to deal with religious zealots in more effective and intelligent ways for the protection of all of us. Whether the zealots are Christian, Jewish, Hindu, Islamic, or Atheists all have agendas that must be fully understood and dealt with intelligently. If the Democrats had better understood the zealotry of the evangelical Christians, John Kerry would be president today. If George W. Bush and his administration had better understood the conflicts between Islam and Israel, we might not have suffered the 9/11 fiasco.

For his part, George Bush by nature has never truly been a religious man. He has never been one to get involved in intellectual pursuits. He knows how to speak the basic emotional language of evangelicals, and how to "push the right buttons" rhetorically. He effectively pushed the buttons of "abortion" and "same sex marriage" to work up the emotions of the religious crowd. This election showed that he knows how to manipulate religious leaders to gain their support. He was very effective in repeating a few coined phrases about prayer and so on. But his personal nature has generally been very secular and more about the ideological beliefs of Republican dogma than about deep spiritual studies. Documentaries point out his statement years ago that "If we can get the churches behind us, we can win any election." Not long after that he had an almost "miraculous born again" religious conversion and started appearing on T.V. shows of religious evangelists for interviews. The new president also has a huge ego. During his acceptance speech, it was impossible ignore that he spoke with a backdrop of a giant W hanging from the walls of the Ronald Reagan building atrium, reminiscent of the Caesars of Rome.

So what can the world expect from this new president?