Paul Volcker and Ben Bernanke made the same mistake. 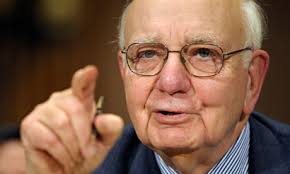 Paul Volcker and Ben Bernanke shared some things in common. Both were in charge of the Federal Reserve Bank.  Both presided over major crisis situations.  And both made one fundamental mistake. Both of them presided over periods of devastating loss and suffering of the American people. Both of them took actions that inflicted pain on people and economies throughout the world. Volcker saw the dollar decline in power and respect and Bernanke saw the USA decline in economic influence and power.

In short, both impacted and lowered the living standards of millions and allowed suffering and the evil of hopelessness to overcome millions. If you want your kids or grand-children to never suffer this way, perhaps we should learn from their common mistake.

Paul Volcker is a tall man. I visited with him once, at an Independent Bankers Convention. I found him willing to listen and he was most responsive to my idea that the "Big Banks" were trying to gain dangerous levels of concentrated power.

Volcker was head of the Fed and  a follower of University of Chicago's economic school, which basically used M-1 as the primary tool to punish the economy enough to drive inflation away. Volcker had a simplistic philosophy that if a government or system made people suffer, and tighten their belts through austerity, then in the long run, after their punishment, everything would be better. He considered inflation a greater evil than unemployment.

Volcker ran the Federal Reserve with intellectual arrogance and unyielding power, and at one point the US financial system, as well as the systems of Mexico and a dozen other nations were on the verge of total collapse.  When the U.S. economy sneezes, developing nations catch a cold. 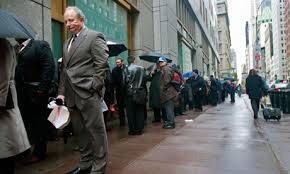 Over 12,000,000 Americans lost jobs, untold numbers of businesses, banks, and families failed. Thousands committed suicide.  But Volcker missed the same point that Bernanke missed. Both made decisions that led to unemployment lines, human suffering, bankruptcies by the millions and even broken homes, medical issues and untimely death throughout American communities.

Bernanke, a brilliant student of the ebb and flow of capital and the powerful tools of the Federal Reserve, thought that Volcker had missed the mark by keeping interest rates high, and money tight for too long, causing major liquidation issues. Bernanke, thought that unemployment was evil and that high interest rates were a cause for unemployment. So when the crisis of 2009 emerged and the great recession of 2009, 2010, 2011, and 2012 hit, he thought to solve the problem by lowering interest rates. Lower and lower, until rates were essentially zero. Low interest rates were a great gift to American business, saving hundreds of millions of dollars, but it was not enough. Because just like Volcker, Bernanke missed one point.

The point being "Velocity".  Velocity in economic terms means how many times money is spent and how many times it turns over. A rule of thumb is that $10,000,000 turns over by respending about 6 times, creating a multiplier effect called "Velocity". In other words, $10,000,000 if spent quickly and turned over 6 times, has a $60,000,000 effect on the economy. Velocity can only happen when the people have confidence.

But in Volcker's time as Fed Chairman, the recession and tight money went on for so long, and business and confidence dropped so low, that there was no "velocity". People would not spend money, even if they had it, for fear of losing it to a longer recession. Banks would not lend, and thus, the insertion of new money, only served to enrich the bankers, who got the deposits and found ways to invest in foreign investment. During Volcker's term, they invested not in the USA, but loaned hundreds of millions of dollars to Mexico. Mexico, then almost defaulted on all of these loans, and this caused yet another crisis. America could not allow Mexico to fail, because so many American banks had so much loaned to Mexico that they would fail, if Mexico defaulted. So, they loaned Mexico more money.

Ben Bernanke was "kinder and gentler" than Volcker, and had no misconceptions that "austerity would solve excess". He instead thought that if he pushed interest rates low enough and put enough money and liquidity in the system, that a recession would end. He took another route, making the same mistake.  He was not an apostle of M-1's University of Chicago school of economic thinking. Instead, he pushed interest rates down and ignored "Velocity". The same thing happened. Banks would not lend to Americans, so they loaned overseas, to Greece, Portugal, Spain, Cyprus and Italy.  At one point, CitiBank, Bank of America, Chase and Wells Fargo had so much lent to the PIGS of Europe, that a default of Greece could take CitiBank down, for example. In the meantime American businesses , for lack of bank lending, failed by the thousands, people went bankrupt, families were destroyed and the toll on human suffering was intense.  Banks and people, even when they got money were afraid to spend it in America for the benefit of Americans.  There was no velocity...no confidence, in the American system.

Although George W. Bush probably had little idea of economic and monetary "Velocity" but he touched on it when he made a speech and told how terrible the recession would become. In the speech he encouraged Americans to "Go shopping".  He without knowing it, was trying to create "Velocity".

But Velocity comes when business and people have confidence that the future will be stable, that they will have security and jobs and they will not lose their homes, cars or savings accounts.

We must wonder, that if instead of the Government, investing Billions and Billions by loaning and giving taxpayer money to big banks, and big investment houses what if they had done something directly for the American people, to encourage velocity.

What if the government had instead given each American an emergency line of credit, or a tax credit of $10,000,  $20,000 or $50,000 to assure that they had an emergency back up to pay their bills, keep their homes, or feed their families?!  What if small businesses had been offered an emergency "Line of Credit"  to take care of business and capital needs.  I think that would have created Velocity, it would have encouraged consumer spending, and it would have given banks new deposits and perhaps more confidence to lend.

I recall that the lack of confidence was pervasive in 2011. The SBA came up with a program where they could lend millions of dollars, with minimal down payments through banks authorized to do SBA loans.  I had a list of 150 banks that were approved SBA lenders, and decided to call them all. Of the 150, nearly 50% had either failed, or been bought by other banks. Those didn't make SBA loans. Of the remaining 70 only 8 were actively participating in the SBA program.  This was strange to me, because the government guarantees 80 to 90% of an SBA loan, so they are some of the safest loans a bank can make. But the banks, were so scared, so nervous, only 8 out of 150 admitted to participating in this program that was designed to help small business, and to "Create Velocity". As the owner of a commercial appraisal  business, I witnessed property after property, go vacant, go into foreclosure and eventually sell for values far below what we would expect in a "normal" economy. When people spend a lifetime building the family business, and then lose it and their life savings, because of decisions made in paneled board rooms at the Federal Reserve Bank in New York, one must hope that the decision makers know something about instilling "confidence" when we need it.

Franklin Roosevelt was speaking of "Velocity" when in his fireside chat he said: "The only thing to fear, is fear itself."

Barack Obama, did much to encourage "Velocity" with his calm and constant words that "We are making progress, but it will take time..."   He was right and it was the right tone, because it gave people and business the time to slowly rebuild.

Volcker and Bernanke, both failed to recognize the importance of "Velocity" or instilling confidence to the American people, that "Everything will be ok. Your government will find ways to encourage or help you."  They did tell some giant banks that "You will not be allowed to fail." but that message simply irritated Americans.  Americans thought that in the USA that their government was in place to support, not destroy. The Federal Reserve is in place, by law to create economic stability.  Volcker and Bernanke both failed us in giving the people more tangible encouragement. But, Volcker and Bernanke would not  emphasize "confidence" or provide tangible ways to instill it.  The  American people by the tens of millions went into unemployment and financial ruin.

During Volcker's term, Detroit's automotive industry was essentially wounded, and the City of Detroit has never recovered. Giant banks failed, under Volcker.  During Roosevelt, the farm communities of America were devastated, and the farm economy has never had the economic clout that it once had. Under Bernanke, we saw devastation of retail chains, of giant malls. Some big banks failed, and to the consternation of millions of people, big banks were given taxpayer money by the billions, and then the big banks still would not lend to Americans.  The banks were too busy raking in millions in record profits, in "trading and speculation".  America was stalled while China emerged as a more powerful global power and our profits in balance of trade and foreign exchange accounts now are less than 10% of China's.

The USA has lost much of it's position as the world's most powerful economic leader.  Tens of millions of Americans who had before, had jobs, homes and hope, now are on welfare rolls and without homes.  When we have these kinds of losses, they are not quickly, if ever, repaired. Confidence, comes from inspired and wise leadership.  Confidence is instilled by inspired leaders.  Consider this, when you select your leaders for the future of your kids and grandchildren.